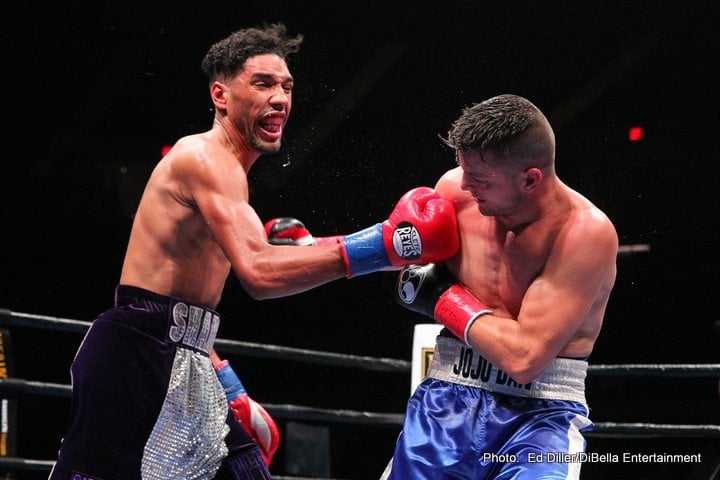 Standing 6’2″, James was intent on using his length to move around Dan and deliver jabs and power punches off of it it. He had success snapping the head back of Dan throughout the early rounds and built up a lead on the scorecards.

“My range was working perfectly,” said James. “I knew he was going to be tough and he was a little tougher than I thought.”

Dan got himself back into the fight after focusing on the body throughout the early rounds and was able to break through James’ guard to land effectively. The southpaw temporarily rocked James late in the sixth round and was able to pick up some momentum for the following rounds.

“I was catching him with nice clean shots, but he kept coming,” said James. “I knew he was going to keep coming forward. He started moving his head and made me miss a couple times. I was trying to avoid a big shot but he did get me with some body shots.”

However, James was able to stick to his game plan and had success over the final couple of rounds while fighting Dan in the trenches. After 10 rounds of welterweight action, the judges scored the bout 99-91-, 98-92 and 97-93 all for James.

Fighting on the undercard of his older brother Omar, Brandon Figueroa (13-0, 8 KOs) used high volume punching to dominate Fatiou Fassinou (28-7-3, 15 KOs) on his way to a unanimous decision victory in their junior featherweight contest.

“I knew that he was a flashy fighter that was going to have a lot of speed and movement,” said Figueroa. “I tried to attack the body. He was a really tough opponent. He took all my best body shots.”

Figueroa had no problem trying to stand and trade with Fassinou as his superior speed and length allowed him to consistently land first. Fassinou’s awkward style included switching stances almost nonstop throughout the bout, and made it tough for Figueroa to sit down and deliver knockout blows.

“This was my first fight back in a while and I was happy to get the rust off,” said James. “Now I’m going to get back to work. I want to get at least one or two more fights this year and then really explode next year and set myself up to be a top contender.”

As the fight went on, Fassinou slowed down enough to where Figueroa was able to trap him in the corner and deliver powerful blows throughout the last two rounds. Fassinou ended the night on his feet but all three judges gave the bout to Figueroa by scores of 79-73 and 78-74 twice.

“I wanted to break him down,” said Figueroa. “He took my punches well. I think he won a round or two. I needed to catch my breath and I was hoping to stop him late. Either way, I got the win and I’m happy.”

On This Day: When Baer Destroyed Carnera And Max Had Too Much Fun0 Total Shares
Andy Ruiz “Back In The Gym On Monday,” Mentions Luis Ortiz And Dillian Whyte As Possible Next Opponents0 Total Shares
Time to Recognize Shakur Stevenson as a Good Fighter and Not a Boring Fighter0 Total Shares
Antonio Margarito predicts Pacquiao beats Spence on Aug.210 Total Shares