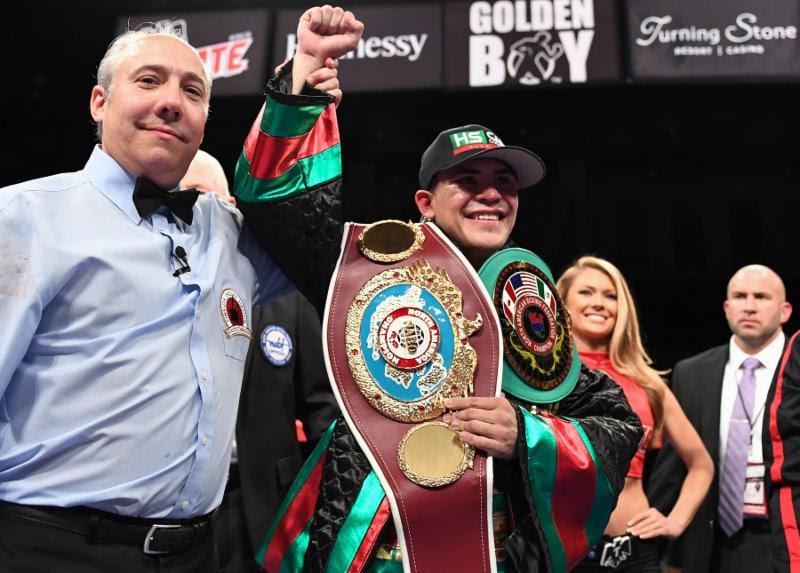 Diego De La Hoya (21-0, 10 KOs), the quick-handed super bantamweight contender of Mexicali, Mexico, successfully defended his NABF and NABO Super Bantamweight Titles against Jose “Sugar” Salgado (35-5-2, 28 KOs) of Cozumel, Mexico via technical knockout at the end of the seventh round of the scheduled 10-round main event of the June 8 edition of Golden Boy Boxing on ESPN at Turning Stone Resort Casino in Verona, N.Y. De La Hoya’s relentless and fast-paced aggression were too much for Salgado to handle, which forced his corner to call a halt to the bout at the end of the aforementioned round.

“We knew that he [Salgado] had been training since October of last year,” said Diego De La Hoya.”Obviously that’s because the fight was delayed, but the fight took place tonight and thank God it was great. I brawled so that people would see that I am indeed a Mexican fighter. He has a lot of experience and a lot of power, but I still brawled to give a great show. I’ll need to talk to my team about what’s next, but hopefully something very good.”

“I felt really tight in this fight, but that’s because the inactivity really affected me,” said Jose Salgado. “I take no credit away from Diego De La Hoya, and I fought a good fight despite the inactivity. He’s a great fighter, and he’ll be a future world champion.”

Golden Boy Promotions prospect Alex Rincon (4-0, 4 KOs) of Carrollton, Texas scored two knockdowns en route to a first-round technical knockout victory over Engelberto Valenzuela (11-14, 3 KOs) of Agua Prieta, Mexico. The fight, which was originally slated for four rounds at the middleweight limit of 160 pounds, was stopped at 1:35 of the aforementioned round.

Lawrence Gabriel (3-1-1, 2 KOs) of Syracuse, New York scored a second-round technical knockout victory against Jimmy Blevins (0-3) of Buffalo, New York in a fight that was originally scheduled for four rounds in the heavyweight division.

Isaac Rodrigues (25-2, 20 KOs) Mocajuba, Brazil stopped Frankie Filippone (25-8-1, 9 KOs) of Chesapeake, Virginia in the fourth round of an eight-round light heavyweight clash. Rodrigues scored two knockdowns, the second of which forced the stoppage at 1:46 of the fourth round.

Armus Guyton (1-0) from Ithaca, N.Y. defeated Mike Diorio (0-1) from Cortland, N.Y. by unanimous decision in the opening bout, a four-round cruiserweight contest. Both fighters made their professional debut in a fight that Guyton won with scores of 39-37, 39-37 and 40-36.

The event took place during the International Boxing Hall of Fame Induction Weekend, where legendary fighters such as “Dr. Ironfist” Vitali Klitschko, Erik “El Terrible” Morales, and Ronald “Winky” Wright will be inducted, along with important figures in the sport of boxing such as Peter Kohl, Steve Albert, Jim Gray and Lorraine Chargin.

De La Hoya vs. Salgado was a 10-round super bantamweight fight for the NABF and NABO Super Bantamweight Titles presented by Golden Boy Promotions and Don Chargin & Paco Presents. The event was sponsored by Tecate, “THE OFFICIAL BEER OF BOXING” and Hennessy, “Never Stop, Never Settle.” The fights took place on Friday, June 8, 2018 at Turning Stone Resort Casino in Verona, N.Y.