Tyson Fury (27-0-1, 19 KOs) was seemingly heading towards a win against WBC heavyweight champion Deontay Wilder in the 12th round when he was dropped hard on the canvas, and ended up having to settle for a 12 round draw on Saturday night in their fight on Showtime PPV at the Staples Center in Los Angeles, California. An overconfident Fury, who appeared to be cruising to a victory in the 12th, tried to get cute and showboat and Wilder took advantage of it by knocking him on his back on the canvas.

How Fury ever got up to keep from knocked out is the major question. Not only did Fury get back to his feet, but he finished the round strong looking like he’d never hurt. It was the strangest thing.

The final scores were as follows: 115-111 Wilder, 114-110 Fury, 113-113. Of those three scores, the score that more accurately was the one that told the story of the fight was the 115-111 score for Wilder. Fury didn’t deserve the win. It would have been a nice comeback story, but you don’t give wins to fighters out of sympathy because they were able to make a comeback and lose 150 lbs to get down from 400 lbs to 250. Fury didn’t deserve the win. The judges got that right at least.

While some boxing fans complained bitterly afterwards that the 30-year-old Fury deserved the win, you have to ask yourself when was the last time a CHALLENGER was knocked down twice by the champion and went on to receive a decision win? It doesn’t happen in boxing. Fury got knocked down twice, fought negatively the entire fight, and he was quite fortunate to get a draw. Fury didn’t deserve the win. The key to beating the champion is to not get knocked down twice, and do more on offense than just spoil. Fury did a lot of spoiling tonight, and it was so ugly to watch.

Fury spoiled for 12 rounds in the same way he World e did against Wladimir Klitschko. Fury’s entire focus was to make Wilder miss with his right hand, which he did a good job of accomplishing that goal. However, even with Wilder landing only a small percentage of his powerful right hands in each round, he was still landing the far better shots than the weak-punching Fury. Wilder landing big power shots again and again tonight in each round. It didn’t matter that he was missing a lot. The fact is Wilder landing the better shots. Fury was just hitting him with jabs and pretending that he was a matador in dodging Wilder’s punches rather than engaging.

If Wilder and Fury want to workout a deal for a rematch, they can do so. However, the World Boxing Council will need to agree to letting Wilder fight Fury a second time, as his mandatory challenger Dominic Breazeale is waiting for his title shot. There’s also a chance of Wilder fighting a unification fight against IBF/WBA/WBO champion Anthony Joshua. 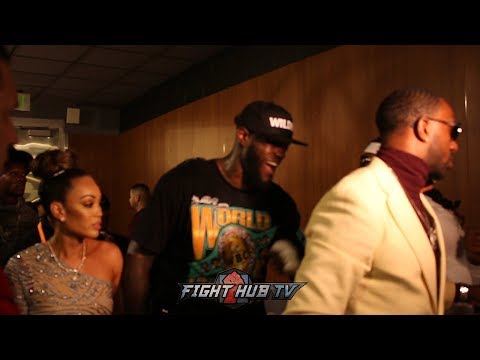