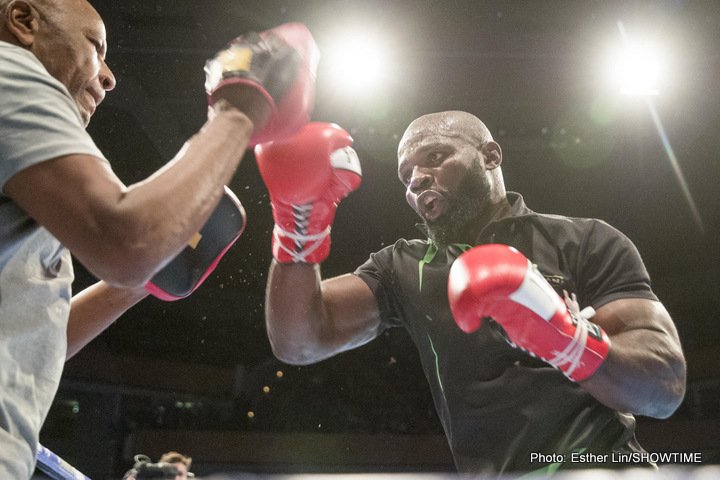 Carlos Takam keeps on ticking. Last night in Huntington, New York, the world ranked heavy won his third on the bounce since being stopped by Anthony Joshua and then Dereck Chisora, as he pounded out a ten-round UD over boxer and MMA fighter Fabio Maldonado of Brazil.

39-year-old Takam won almost every round in a fight that never really caught too much fire. Now 38-5-1 with 28 KO’s, Takam remains in the hunt for another big fight opportunity. Maldonado, the same age as Takam at 39, falls to 26-4(25).

Last night’s heavyweight fight was widely expected to be an explosive affair yet it wasn’t to be. Takam, with his experience and his know-how, was in charge all the way through, winning the rounds. Maldonado, coming off a May 2019 stoppage loss to Michael Hunter, kept trying but he was outclassed.

Takam, who gave Joshua real trouble and was beating Chisora before getting caught, was in line to fight undisputed cruiserweight champ Oleksandr Usyk in the Ukrainian’s heavyweight debut, but the Frenchman lost out as Usyk suffered an injury. But Takam, as long as he’s here and winning, will surely get himself another big-fight chance sooner rather than later.

Solid if unspectacular, Takam can hit, he can take a whack and he is almost always in shape. In fact, Takam, a pro since 2005, has been in with four world champions, either former or current (AJ) in his time and he has given all of them a tough time of things.

Takam will no doubt be hoping the phone rings soon and maybe Andy Ruiz or a Jarrell “Big Baby” Miller picks him as their comeback opponent. Takam is dangerous enough to ensure these types of fighters would have no choice but to take the fight entirely seriously if they did sign up for it.

Takam should maybe have scored a stoppage last night but he was perhaps satisfied with getting a decent 10 rounds in his first fight of 2020.