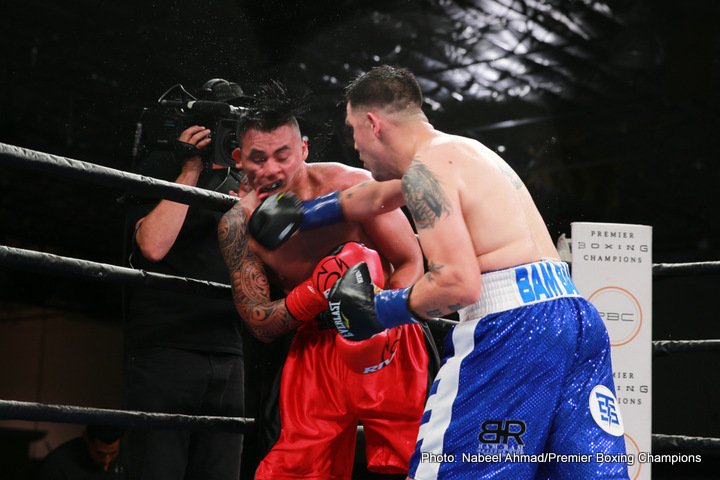 Former world champion Brandon Rios (34-3-1, 24 KOs) returned to the ring with a seventh round TKO of Mexico’s Aaron Herrera (23-7-1, 14 KOs) in the main event of Premier Boxing Champions on FS1 and FOX Deportes Sunday night from The Pioneer Event Center in Lancaster, California.

“I had that good nervous feeling tonight, like before my pro debut,” said Rios. “I was a little jittery but it felt good in there.”

In his first fight in 19 months, Rios showed off his signature exciting style in breaking down the very game Herrera before stopping him late in their welterweight contest. Rios controlled the action from the outset as he showed off his strong inside game while tagging Herrera with hooks and uppercuts.

Herrera received a fair deal of punishment across the early rounds but remained competitive in consistently throwing back against the aggressive Rios, who was able to parry some of Herrera’s shots with effective head movement. Herrera had his best round in the fourth when he changed the tides momentarily by being more active than Rios.

“I’m always ready for whoever they put in front of me,” said Rios. “He was tough and he was swinging hard. I had to be careful and couldn’t go in there crazy. He caught me sometimes but that’s part of the sport.”

The shift did not last long as Rios ramped the pressure back up and began to slow Herrera down with increased body work. Herrera kept fighting back but was clearly tiring late in the sixth round as Rios teed off on him against the ropes with big power punches.

“Next time I get in there I’ll be better,” said Rios. “You’ll see more progress each time I get out there. I still have my same style but I’m adding some more athleticism and head movement to it. I felt like I did well in there.”

The attack continued in the seventh round as Rios stalked Herrera towards the ropes before eventually delivering the pinpoint right hook to the body that put Herrera on the mat. Herrera was unable to beat the count and Rios returned to the win column with a stoppage victory 2:11 into the round.

“This is a new beginning and a new chapter in the book that I’m writing,” said Rios. “We’re ready to move forward from here. I’m ready for the next challenge.”

The co-main event of the telecast saw unbeaten Mario Barrios (19-0, 11 KOs) score a sensational knockout of Jose Luis Rodriguez (23-9-1, 13 KOs) with left hook to the body that ended their super lightweight battle in the seventh round.

“I knew that he was going to fight the whole time,” said Barrios. “He was going to stay coming in and I had to keep my distance. I stunned him with an overhand and then I found him on the liver.”

Barrios was impressive from the start, using his length to pick off his opponent with powerful uppercuts in the opening minutes of the bout. Despite taking numerous clean power shots from Barrios throughout the battle, Rodriguez never stopped attacking and was able to occasionally frustrate Barrios with his relentless physicality.

The bout was eventually defined by the powerful body shots that Barrios dedicated himself to delivering throughout the fight. The consistent effort clearly slowed Rodriguez, who took more and more clean punches as the fight went on.

Early in round seven Barrios’ attack finally wore Rodriguez down as a series of punches culminating with the left to the body put Rodriguez on the canvas. Referee Zac Young quickly called off the bout 37 seconds into the round to give Barrios his third straight knockout victory.

“I want to fight everyone in the 140-pound weight class,” said Barrios. “I’m going to take it one fight at a time and work my way up to a world title shot.”

In the opening bout of the telecast, rising prospect Jose Miguel Borrego (12-0,11 KOs) remained unbeaten with a fourth-round stoppage of Kevin Watts (11-2, 4 KOs) in their super lightweight matchup.

Watts was the more aggressive fighter in round one, controlling the action with his jab as Borrego switched stances but threw few punches. Watts continued to have success in round two sticking Borrego with power shots while avoiding the returning punches Borrego threw back.

The third round saw Borrego begin to break through the guard of Watts with powerful left hooks, which seemed to slow the movement of the previously once-beaten Watts, who began to stand and exchange more with his opponent. As the action heated up in round four, Borrego connected with a massive left hook that stunned and bloodied Watts’ right eye.

Borrego kept up the attack and eventually sent Watts to the canvas with another left hand over two minutes into the round. While Watts returned to his feet, Borrego quickly cornered him and delivered another flurry that forced referee Jack Reiss to halt the bout 2:42 into the round.