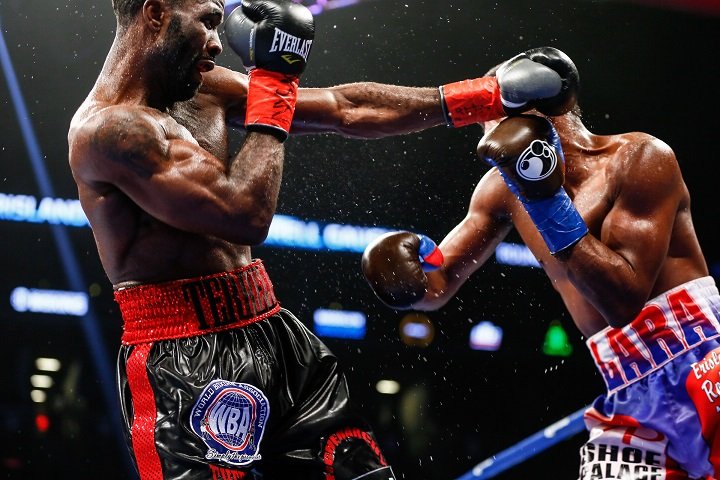 In the walk out fight of the night, WBA Super World junior middleweight champion Erislandy “American Dream” Lara (25-2-2, 14 KOs) defeated the previously undefeated #6 WBA Terrell Gausha (20-1, 9 KOs) in what looked like a glorified sparring match on Saturday night on the Jermell Charlo vs. Erickson Lubin card on Showtime Championship Boxing at the Barclays Center in Brooklyn, New York.

Lara, 34, knocked Gausha down in round 4 after catching him with a left uppercut while he was leaning forward. The knockdown came right before the crowd started loudly booing the 2 fighters for the lack of action in the fight. Lara looked like he got briefly energized from the booing, as it seemed to motivate him enough to go on the attack to land a meaningful punch. Unfortunately, Lara went immediately back to playing it safe, clinching and throwing mostly single pot shots.

Gausha was a real disappointment. He wasn’t highly rated going into the fight, but boxing fans expected better than this. Gausha looked barely better than Lara’s recent over-matched opponents Yuri Foreman, Delvin Rodriguez and Jan Zaveck. Gausha lacked punching power, which is probably the main reason he was given the fight. He didn’t go after Lara to throw combinations or target his body. You would think that Gausha would have taken advantage of this title shot to fight as hard as possible, but he failed to do that. Gausha looked like he was afraid to get countered by Lara, and that left him in the position where he was just eating left hands from the outside.

It was slow and boring fight with Lara jabbing, moving and fighting defensively against an over-matched Gausha.

It would have been nice if Lara had fought Jermell Charlo tonight and Gausha had fought Austin Trout. That would make sense.

Lara vs. Gausha was the main event on tonight’s Showtime Boxing card, but it was by far the leas interesting and the far less popular of the three fights. In the future, Showtime needs to place the more appealing fights involving Charlo or whoever at the top and move Lara down to the first fight of the card until he starts fighting better opposition. It’s been 3 years since Lara fought an interesting opponent in Saul Canelo Alvarez.

After the fight, Lara said he’s open to fighting WBC junior middleweight champion Jermell Charlo or IBF champion Jarrett Hurd. I’ll believe that when I see it. Lara had 3 years of soft fights since his loss to Saul Canelo Alvarez in 2014. I don’t know that Lara has the talent to hang with Charlo or Hurd.