After turning in a lackluster performance the last time he was in the squared circle, Raymond “Savage” Ford bounced back in commanding fashion as he earned a unanimous decision against Richard Medina Jr on Saturday, June 25 at Tech Port Center + Arena in San Antonio, Texas. Ford, the highly touted 23-year-old featherweight prospect looked razor-sharp as he dictated the pace of the fight, and basically did whatever he wanted to do inside the ring.

The fight was never in doubt as the judges witnessed Ford overwhelm Medina, as they scored the bout unanimously in Ford’s favor by a tally of 99-91, 100-90, and 100-90. The judges were pinpoint accurate with the scoring this time around, but approximately four months ago the scorecards the judges turned in were severely scrutinized. 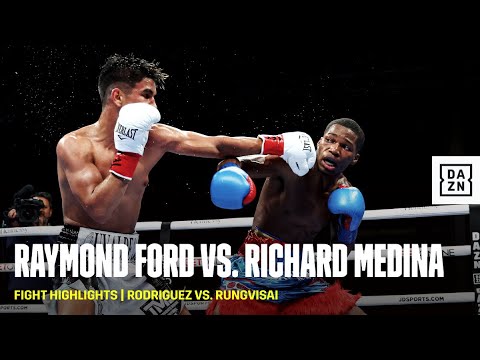 On February 5, 2022, it was a battle of the unbeaten as Raymond Ford defended his WBA Continental Americas Title against Edward Vazquez. Ford immediately took control of the bout by using his jab, and throwing accurate combinations, but Vazquez was able to turn the tide by pressing forward, cutting off the ring, and attacking Ford’s body. It was a back and forth battle that Ford was fortunate to win by way of a split decision.

Realizing he didn’t put his best on display, the Camden, New Jersey native Raymond Ford, went back to the lab to sharpen some of the tools in his tool belt. He spent some time working with a fellow product of New Jersey, the WBC/WBO lightweight champion, Shakur Stevenson. “Don’t get lazy, and stay busy,” was a snippet of advice that Shakur shared with Raymond Ford.

On June 25, Ford stepped into the ring to face Medina, and it marked the second time in a row that Ford was going to battle an undefeated opponent. As the opening bell sounded, it became very apparent in regards to Richard Medina being a boxer who is technically sound, but, in the world of sports, a mantra that is universal is the fact that speed kills. Raymond Ford was clearly the faster fighter as speed proved to be a disadvantage for Medina.

Ford was calm, cool, and collected as he constantly landed his rapid-fire jab, threw effective combinations, and kept the match in the center of the ring. Raymond Ford’s speed advantage, fluid movement, and ripping shots to Medina’s body also enabled him to take complete control of the match.

Raymond was so comfortable in the ring to the point he went into savage mode by using his hands to simulate a crossover dribble motion mid-fight. He executing the crossover motion, then he hit Medina with a 1-1-2. Ford did the crossover dribble motion a second time, and proceeded to hit Medina with a jab. The fight never reached a competitive level as the Camden-bred featherweight earned a dominant win by way of unanimous decision, and this time around he did it in an impressive fashion.

Raymond “Savage” Ford (12-0-, 6 KOs), is a well-rounded fighter who is also a rising young star on the Matchroom’s roster. Ford, the number six ranked WBA featherweight contender had the best performance of his young career against Medina, and that performance may persuade the Ford camp to move on to the next level of competition.