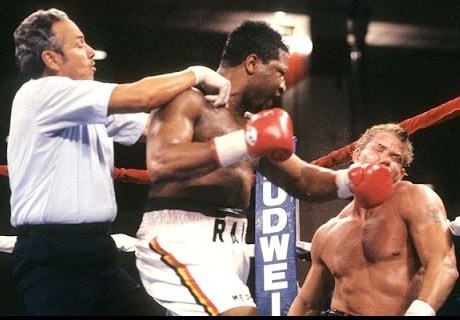 The fight was dubbed “Test of Courage” and the loser of the heavyweight battle that took place a quarter of a century ago today had to show real courage in even stepping back into a boxing ring after what happened to him in Atlantic City, New Jersey.

Tommy Morrison, unbeaten, heavily hyped and even a movie star, was challenging recently crowned WBO heavyweight champ Ray Mercer in a clash of unbeaten punchers. What followed was nothing short of gruesome.

Former army sergeant and 1988 Olympic gold medal winner Mercer, 17-0, was coming off a less than impressive win over the slick and tricky Francesco Damiani. Mercer was outboxed and on his way to a points defeat before he sensationally turned the fight, from January of that year, around with a wicked 9th-round one-punch KO.

Morrison was 28-0 but he had never faced anyone of Mercer’s quality or, crucially, his toughness. It showed. “The Duke,” promoted by Bill Cayton, got off to a great start, tattooing Mercer with lefts and rights to the head along with some eye-catching uppercuts. But Mercer, known as “Merciless,” had a chin that was simply legendary and after taking Tommy’s best in the opening three rounds, the older, more experienced man was able to come back.

Morrison, both tired and somewhat intimidated after landing his best work and using up plenty of energy – a good amount of it nervous energy – unravelled in shocking fashion at the start of the 5th. Caught on the ropes in a corner and out of gas, Morrison was smashed by too many punches to count on initial viewing. Mercer belted his challenger with power punch after power punch – 15 in all as replays showed – and most of them landed flush on Morrison’s unprotected jaw.

Referee Tony Perez covered himself in anything but glory as he basically allowed Mercer to blast away for as long as he wanted to; with Perez doing nothing but tap Ray on the shoulder just before Morrison finally slumped to the mat. It was disturbing to see such naked violence and it was even more disturbing witnessing such pathetic officiating from a referee. Watching the carnage in slow motion replay was/is even more troubling.

Morrison was so out of it that, just after he’d been guided back to and sat down on his stool, he began ducking and dodging imaginary punches; the Rocky V co-star believing in his semi-conscious, traumatised state that the fight was still ongoing. Many felt the sport had seen the last of “hype job” Morrison, and indeed, he could have quit after suffering such a nasty knockout defeat. Instead, showing great courage, Tommy was able to bounce back, even winning the WBO belt he had so unsuccessfully challenged Mercer for.

Mercer went on to lose to the ageing but still capable Larry Holmes, before going on to again prove his toughness in great, albeit losing battles with Evander Holyfield and Lennox Lewis.

As for Perez, he refereed until 2005, disturbingly working a substantial number of fights after Mercer-Morrison that featured dangerous punchers.