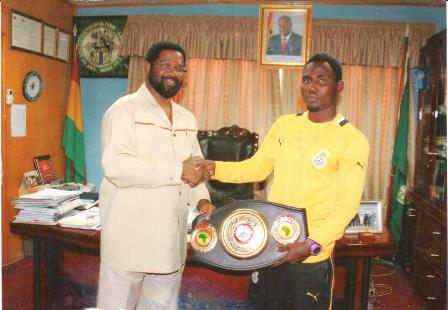 Ghanaian boxing bragging rights will be on the line when undefeated Rafael ‘Sweet Pea’ Mensah faces compatriot Emmanuel ‘Game Boy’ Tagoe in a battle of two of Ghana’s best lightweight boxers in Accra in May.

Boxing247.com can exclusively report that the camps of both boxers are in talks to make the super fight happen within three months, and a deal could be finalized by the end of this month.

Both boxers are highly rated with a combined career record of 47 wins, 28 knockouts and a solitary defeat, as well both have held various titles in Ghana and on the African continent and are both desperately chasing world title dreams.

WBA rated no.7 Lightweight in the world, Mensah (24-0, 19 KOs) who is managed by Landmark promotions and Management headed by Anthony Kermah previously held the West Africa Boxing Union (WABU) as well WBA Pan Africa Lightweight belts and has beaten all 24 opponents during his professional career, knocking 19 out.

Tagoe (23-1, 9 KOs) never had the best of career starts, suffering a 5th round technical knockout defeat to Lante Addy in his debut fight way back on June 19, 2004 but he never wavered, coming back strongly and has won all 23 career fights since.

Now their quest to international stardom and world championships is set to face the sternest of test when they face each other in the ring in May, talks between both parties have begun in earnest and are expected to be concluded in the coming days for confirmation of date of what could be one of the biggest in Ghanaian boxing history.