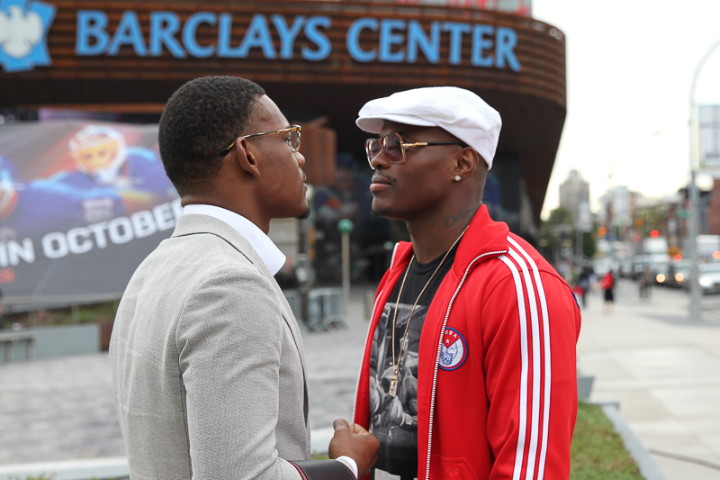 The undercard for the Brooklyn showdown will be announced soon.

Below is what the fighters and executives had to say today:

“The fans will be the winners at the end of the day. This matchup is going to be all action-packed. It’s a very interesting matchup.

“I’m thankful to Peter for accepting the challenge and for giving me the opportunity to have a career-changing fight.

“I believe my time is now. I know there was hype around me as a prospect. People have their opinions about me, but I believe at this present time that I’ve matured as a man overall. I’m in my prime.

“To me, this fight means everything to Brooklyn. This is a thick-skinned city that was raised on fighting. You always had to defend yourself. We have that pride of having great fighters that come from here and I’m fortunate enough to be that champion to continue the legacy.

“I feel like this fight has a lot of significance to it, not just in New York, but to the sport of boxing in general. A lot of people have been asking for this fight, and now that it’s here, you will see a tremendous amount of attention surrounding it.

“I think youth is everything in the sport of boxing. Although Quillin is older than I am, he has that experience and power that he will bring into the ring. Anything can happen in this sport.

“I am such a fan of this particular fight, this fight is going to be an amazing fight.

“Just because Peter has flaws in one area, he can back that up with a one-punch knockout, so you always have to be prepared for that.

“Peter’s flaws are that he loads up his shots too much, is slow on his feet and isn’t headstrong. If I can execute the game plan I think it will be a phenomenal outcome.

“We adopted Peter as one of Brooklyn’s own, but come fight night you will all see a Brooklyn-born champion.

“It doesn’t matter what he comes to the table with, we will have a 10-week camp for this fight and we will be completely ready.

“I’ve been on a strict diet, I haven’t been eating chocolate. But after December 5th, I’m going to be the Cookie Monster, don’t miss it.”

“This fight means everything to me. It’s two guys for the battle of Brooklyn. We are both going to have great support in the building and this fight will really inspire people.

“In New York City you never get to see two guys at this level of boxing square off against one another. It means a lot and I’m very excited about this fight.

“I expect Danny to bring his great chin to this fight. I didn’t notice it before but his chin looks very huge, so that’s what we’re looking at now.

“I feel like I’m the son of Brooklyn. Although I’m from Michigan, this city has taken me in like I’m one of their own. You see what Las Vegas did for Floyd Mayweather, that’s what Brooklyn did for me.

“This is a good guy vs. good guy fight and it’s good for the sport of boxing. I’m coming to throw bombs. It’s not about the bills. It’s about the character of the person I’m fighting. This is the type of fight that is going to bring the best out of Peter Quillin.

“I lead a very healthy lifestyle and train even when I’m not preparing for a fight. I keep myself as young as possible.

“You’re going to see Fourth of July in the month of December. We’re going to melt some snow.”

“When I think of Barclays Center now, we truly are in the big event business.

“When I think about the remainder of 2015, there were two dates on my calendar and one of them is Battle for Brooklyn on Dec. 5. The two gentlemen up here are part of the Barclays Center. This is their home away from home. There is no place better for them to be getting it on.

“I want to make sure we put on a great show for the fans in Brooklyn. We’re excited to see all the fans on Dec. 5.” 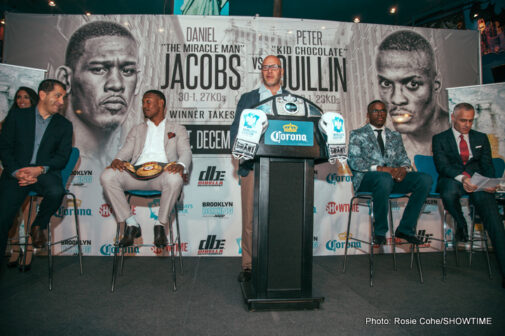 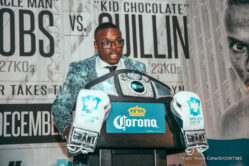 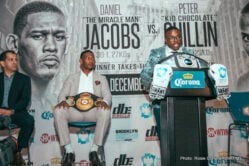 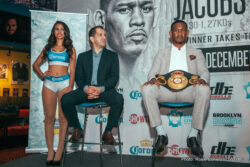 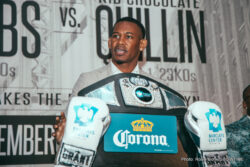 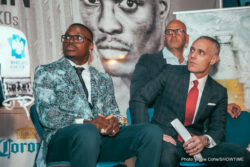 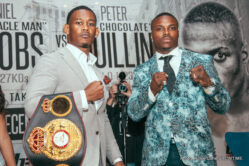 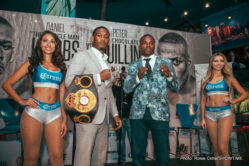 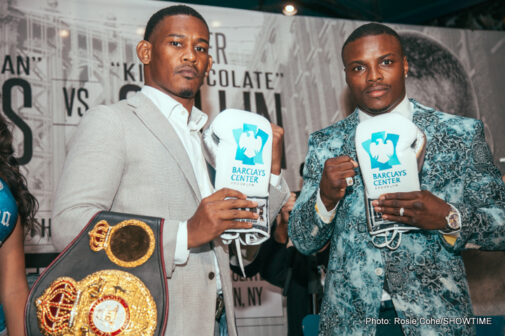 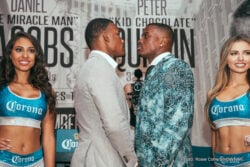 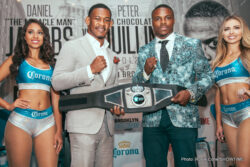 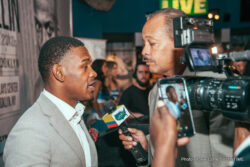 “Barclays Center has become the home of boxing and one of the great places to watch boxing right now.

“SHOWTIME has developed both of these young men. These two champions both made their names as SHOWTIME fighters. This fight will properly end the year on SHOWTIME.

“I’ve known both of these young men since they were kids. They are terrific men and a true credit to the sport. These guys have always gotten along, they respect each other as fighters, but there is a true belief on both their parts that they are the best.

“The winner of this could be a superstar.

“I expect both men to go down. The fans will be on their feet the whole time. This is a can’t miss fight between two evenly matched champions and guys who want and need this victory.”

“We’re thrilled to be working with DBE and Barclays Center on this event. You’re going to hear a lot of genuine excitement because this is the right fight, at the right venue and at the right time.

“Brett [Yormark] has turned Barclays Center into the home of boxing on the East Coast.

“We take a great amount of pride in these two young men, because they are everything that is right with the sport.

“They’re very different young men with fascinating stories. They’ve both overcome incredible odds. Their roads led them to each other. It will be hard for us to choose who to root for because these are two great young men and great boxers.”

Canelo Alvarez On His Loss To Floyd Mayweather: It Was A Really Boring Fight239 Total Shares

Canelo Alvarez On His Loss To Floyd Mayweather: It Was A Really Boring Fight239 Total Shares