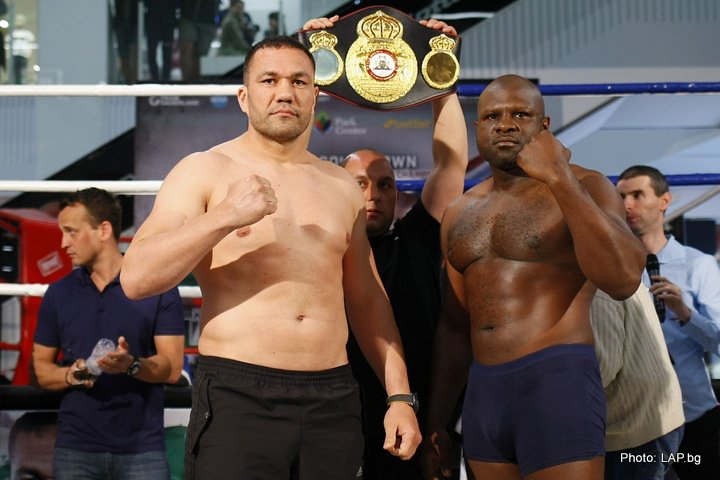 Kubrat Pulev (24-1, 13 KOs) and Kevin Johnson (30-7-1, 14 KOs) both weighed in today ahead of their WBA Intercontinental Heavyweight Championship clash at the Arena Armeec in Sofia, Bulgaria, as did all the undercard fighters for tomorrow’s event.

Here is a list of the official weights from Sofia:

Johnson: ‘’I’m going to break Pulev down and make him quit!

Kevin Johnson (30-7-1, 14 KOs) says he will break Kubrat Pulev (24-1, 13 KOs) down and make him quit when they meet for the WBA Intercontinental Heavyweight title on Friday night at the Arena Armeec in Sofia, Bulgaria.

‘’Pulev doesn’t scare me,’’ said the American heavyweight. ‘’He’s a cartoon character. He might look serious but that’s because he’s an ugly dude, and ugly people always look serious. Whereas, people like me always have a smile on their face. It is what it is. I can smile in person and I can whoop a** in the ring.

Johnson can expect to face a partisan crowd in Sofia cheering for their national hero, but the 37 year-old plans to use this to his advantage, as he looks to rejuvenate his career with a victory over the IBF mandatory challenger.

‘’The louder they are and the more they cheer for him, the more energy I’m going to get,’’ he says. ‘’They may be shouting his name but I’m stealing that energy, and when his a** loses, what are they going to say then? People better start supporting me now because I know I got fans here. In fact, the president of Bulgaria called me personally and told me I should whoop his ugly a**!”

Kubrat Pulev (24-1, 13 KOs) and Kevin Johnson (30-7-1, 14 KOs) came face-to-face at a press conference today at the Hotel Marinela in Sofia ahead of their WBA Intercontinental Heavyweight title clash on Friday night at the Arena Armeec. Fite TV will broadcast live from Sofia.

Pulev makes the first defence of the WBA strap he claimed with a third-round stoppage victory over former World Champion Samuel Peter in December, and also risks his IBF mandatory position, which would see him in line to face the winner of Saturday’s World title showdown between Anthony Joshua and Wladimir Klitschko.

Johnson, the former World title challenger from New Jersey, USA, insists he is not there to make up the numbers, and is also targeting a second shot at World honours as he looks to upset the Bulgarian hero in front of his home fans.

‘’Kevin Johnson is a good boxer who will give everything, but he will not succeed,’’ said Pulev. ‘’My goal is to become World Champion. I know a loss will set me back a long way, but I’m confident in my abilities. My opponent is an experienced fighter, who will be difficult to break down, but we’ve prepared for that. On Friday, I want to put on another great show for the Bulgarian people, and then I want my shot at the World title.’’

‘’If Pulev thinks he’s in for an easy night, he’s got another thing coming,’’ said Johnson. ‘’I’m no Samuel Peter. I’m not here to lie down and collect a cheuque, I’m here to cause an upset. I’m going to take this boy to school and show the Bulgarians what a Jersey boy can do. I’m going to give him an ass whopping on Friday, the likes of which nobody has seen before. We’ve both been through the same obstacles and we’ve both fought for World titles before, but only one of us is going to get that second shot, and that’s going to me.’’

Having taken in the sights of Sofia, Johnson also revealed he plans to leave Bulgaria with two souvenirs. ‘’The women here are very beautiful,’’ he said. ‘’And I’m looking to get married. On Saturday, I’m going to be leaving with a new belt and a new wife!’’

Said promoter Nisse Sauerland: ‘’It’s a great weekend for heavyweight boxing. Kubrat is mandatory challenger to face the winner of Anthony Joshua and Wladimir Klitschko for the IBF World title. Either they fight him or they vacate the belt. He’s fought hard to get back into this position, and he’s risking it all in this fight against a rejuvenated Kevin Johnson. Kevin also knows what’s at stake and what a win would mean for his career. Both men have been training hard, and are ready to give it their all in the ring on Friday night.’’

Tickets for the WBA Intercontinental Heavyweight title fight between Kubrat Pulev and Kevin Johnson on Friday night in Sofia are available online via www.eventim.bg.

Pulev vs Johnson on April 28 in Sofia

Pulev made a triumphant homecoming on December 3, 2016, fighting for the first time in his home country, and forcing former WBC World Champion Samuel Peter to retire after three rounds in front of a capacity crowd of 15,000 Bulgarian fans.

‘’It was an overwhelming experience for me to receive so much support from the crowd. I could feel the energy surging around the arena, and that gave me the power to win by stoppage,’’ said ‘The Cobra’, who is now looking forward to a second fight on home soil as he aims to secure a second shot at World honours.

‘’My number one goal is to fight for the World title, and on April 28, I will take another step towards achieving this goal. I’m already training hard to prove I am worthy to fight again for the heavyweight crown.

‘’Johnson is a tough opponent. You must only look at his resume to tell this will be a real challenge. He has shared the ring with many World-class fighters like Vitali Klitschko and Anthony Joshua.

‘’I know I will need to be at my best to beat him, but with the help of my coach Ulli Wegner and the support of the Bulgarian people, I’m confident my hand will be raised, and we will be able to celebrate another great night for Bulgarian boxing and another step towards me fulfilling my dream of becoming the Heavyweight Champion of the World.’’

‘’We’re delighted to be returning to the Arena Armeec for what promises to be another great night of boxing on April 28,’’ said promoter Kalle Sauerland. ‘’We have promoted shows all over the World, and I must say, the atmosphere in Sofia was second to none. The support that Kubrat receives from the Bulgarian people is special, and this will help him to reach the top.

‘’He faces a tough test against Kevin Johnson, who having fought many of the biggest names in the heavyweight division, has only been stopped once. Kubrat must prove himself once again, and show that he is ready for a World title challenge.’’