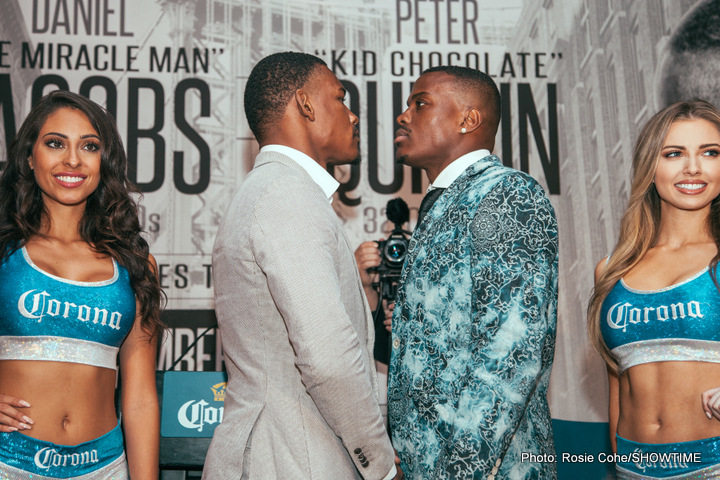 So who will win the can’t miss, sure to be intense 12-round argument no one expects to be a blowout?

Nineteen boxers, five of whom are world champions, gave their predictions and came up with a different conclusion than the writers. While some saw it as too close to call, those that did make predictions saw it for Jacobs, 8-5-2.

How the media and fighters see “JACOBS VS. QUILLIN”:

Tim Dahlberg, Associated Press, (Jacobs): “I like Jacobs in a tough fight, winning by a close decision. With Quillin’s power he might go down at some point in the fight, but I like Jacobs’ boxing IQ and skills to pull him to a close win.’’

Kevin Iole, Yahoo Sports, (Quillin): “Peter Quillin by decision: This is one of those fights I literally just flipped a coin to pick. I like Jacobs’ range and I think he has faced better competition from top to bottom, but Quillin is an accurate puncher with good power and I think he will win a dogfight.’’

Bob Velin, USA Today, (Jacobs): “While Quillin is bigger and a bigger puncher, Jacobs will outbox him. I just feel with all that Jacobs has been through in his life, he wants this more than Quillin. That will be the difference. Jacobs wins unanimous decision.’’

Lance Pugmire, Los Angeles Times, (Quillin) “Peter Quillin has been working toward a victory like this for years. It’s time to put up or shut up and this test against a cerebral Daniel Jacobs will let us know once and for all if Quillin is elite or is entitled. Quillin by unanimous decision.’’

Mark Jacobsen, New York Magazine, (Quillin): “Quillin will win. Jacobs has good name (minus two letters) but he is light in the resume. Quillin beat Andy Lee (note: split draw) and is gritty.”

Robert Morales, Los Angeles News Group, (Quillin): “I’m taking Peter Quillin to take Daniel Jacobs’ title via decision. Simply, I think Quillin is a better fighter and that his superior skills will bring him his second world title in this division. My only concern is Quillin making weight. But if he hasn’t struggled so much to do so, he’ll win.’’

Brian Campbell, ESPN, (Quillin): “What makes this middleweight title fight so intriguing is both fighters still have questions to answer regarding whether they are truly elite. Both are athletic and powerful, and each has shown a certain level of vulnerability. Ultimately, I think Quillin has the stronger chin and that will be the difference. Quillin by KO.’’

Damian Calhoun, Orange County (Calif.) Register, (Jacobs): “They’ve been calling each other out for years and now they’re finally going to meet in the ring. I expect this fight to be close. I can see both fighters getting tested and touching the canvas in this fight. In the end, I think Jacobs, with his overall boxing skills, will be able to do enough to edge Quillin for a unanimous decision victory. Should be a great fight.’’

Lyle Fitzsimmons, CBSSports.com, (Quillin): “A hard fight not to like, between two fighters whose styles are appealing. There’s admittedly little to separate between the two, so in a close one I’ll go with the guy who’s had more big-stage opportunities — Quillin. He can hold his own in a technical match, and he’s got enough dog in him to grind through a tough one, too. Quillin by close decision.’’

Kelsey McCarson, BleacherReport.com, (Quillin): “Kid Chocolate proved his ability as a boxer in his draw with Andy Lee, and there’s never been any question about his power. The combination of those two things, alongside his experience, will lead him to victory in a close and entertaining bout. Quillin by decision.’’

Ricardo Lopez, La Opinion, (Jacobs): “I think Jacobs wins this one to extend his impressive 10-fight KO streak. He’s proven to be really strong, but it will be a close one.’’

Andreas Hale, Ring Magazine, (Jacobs): “Danny Jacobs has been primed for greatness the moment he started his pro career. Never mind his loss to Dmitry Pirog, he wasn’t mentally in the game. Aside from that hiccup, he’s showcased remarkable skill and a knack for the finish. Quillin has been sharp, but hasn’t quite passed the eye test for me. His fight with Andy Lee was perhaps indicative of what happens when Quillin steps up in competition. With Jacobs being the more skilled of the two and on a mission to keep the judges out of the decision, I see him taking over late in a competitive fight where Jacobs slowly wears down Quillin en route to a late stoppage.’’

Doug Fischer, RingTV.com/The Ring magazine, (Quillin), “I think Daniel Jacobs, the more polished boxer of the two middleweights, will outclass Peter Quillin over the first half of an intense boxing match. I believe Jacobs will use his sharper technique to catch Quillin between wide power volleys. He might drop Kid Chocolate early. But I think Quillin will gradually impose his greater size and strength on Jacobs. I think Quillin will catch and overwhelm Jacobs late in the fight to win by TKO”.

Mike Sloan, Sherdog.com, (Quillin): “This is such a terrific fight, one that can go either way. With so many variables being taken into account, with both Quillin’s and Jacobs’ skill sets, it’s actually a toss-up. Both men have terrific power, they both have great hand speed and they have taken on quality opposition. My gut initially told me that Quillin would come out on top but I’ve been flip-flopping ever since this fight was announced. With that said, I have to stick with my gut and go with Kid Chocolate via majority decision.’’

Anson Wainwright, RingTV.com/RING magazine, (Quillin): “An excellent matchup for the middleweight championship of Brooklyn. I see this as 50-50. Both guys have very good power and are capable of hurting the other. I can see both on the canvas with Quillin doing enough to win a very good fight on points, with talks of a rematch afterwards.’’

Joe Santoliquito, RingTV.com/Sherdog, (Quillin): “I like Quillin’s hand speed and punching power. I also feel he’s recently been in with better opposition, preparing him for fights like this. Quillin wins a decision.”

Miguel Maravilla, FightNews.com, (Quillin): “It will be a close fight but I give the edge to Quillin to win a decision.”

Percy Crawford, FightHype.com, (Quillin): “Quillin showed a lot of growth suffering his first blemish (draw against Andy Lee). He also handled being floored for the first time very well against a very dangerous Lee during that fight. I just don’t see Daniel Jacobs being able to put him in situations he can’t handle. Quillin comes on in the mid rounds and stops Jacobs by eighth-round TKO!”

Diego M. Morilla (XN Sports, RingTV.com), (Quillin): “It is a very close fight on paper, and it will live up to the expectations. Both fighters are equally skilled and both are proven at this weight, but in terms of resilience and power, the advantage goes to Quillin by a small but meaningful margin. Kid Chocolate is the one who has faced the strongest, most powerful opponents so far, and his results have been impressive for the most part. If Jacobs can establish his distance and his speed, he has a chance. But if Quillin is able to turn this into a fight he’ll score a decisive win by decision or late stoppage.’’

Steve Lillis, Box Nation, (Quillin): “Great match and local bragging rights make it even sexier. I am edging towards Quillin who is more battle-hardened. Quillin by TKO 8.”

Eric Raskin, Boxing Writer/PBC Ringside Scorer (Quillin): “Jacobs has been one of the best feel-good stories in boxing over the last few years, but feel-good stories don’t win you tough fights. Quillin is the highest caliber opponent he’s faced since his upset loss to Dmitry Pirog, and I expect Kid Chocolate’s length and strength to separate him from Jacobs. Look for a fan-friendly, competitive fight, with Quillin winning by decision, roughly eight rounds to four.’’

Brad Berkwitt, RingsiderReport.com, (Jacobs): “On paper, this is a great matchup and New York City, which has some of the greatest boxing fans in the world will love it! It’s really a tough fight in my book to call, but I’m going with Danny Jacobs by a tough close decision in the 115-113 range.’’

John J. Raspanti, MaxBoxing.com, (Quillin); “I’m going with Quillin for two reasons: Talent and whiskers. Quillin has also been in with the better fighters during his time in the ring. He showed a strong chin against Andy Lee seven months ago. Cancer survivor Jacobs is a great guy, but looked vulnerable against Sergio Mora in his last fight. If the feather-fisted ‘Latin Snake’ can knock him down, Quillin, with 23 career KOs, can stop him. Quillin by TKO 9.’’

James Slater, FightNews.com, (Quillin): “I like Quillin in a great fight. Jacobs is a class act, as is Quillin; I just think Quillin wants it more. Both can be hit, hurt and knocked down, and we will very possibly see a couple of knockdowns. I take Quillin to either get a points or a late stoppage win.’’

Jason Gonzalez, Examiner.com, (Quillin): “I think Jacobs will eventually succumb to the pressure that Quillin will apply. Jacobs was knocked down early by and very light-hitting Sergio Mora. You would be remiss to not question the sturdiness of Jacob’s chin. Expect Quillin to test the chin of Jacobs early and win by TKO 7.”

Erika Fernandez, BlackSportsOnline.com, (Jacobs): “I think this will be a very close fight, but I feel that Jacobs has the better skill set and is hungrier for the victory. When you combine skill with hunger that is a deadly combination. I think it could go either way, but I am predicting Jacobs by eighth-round KO.”