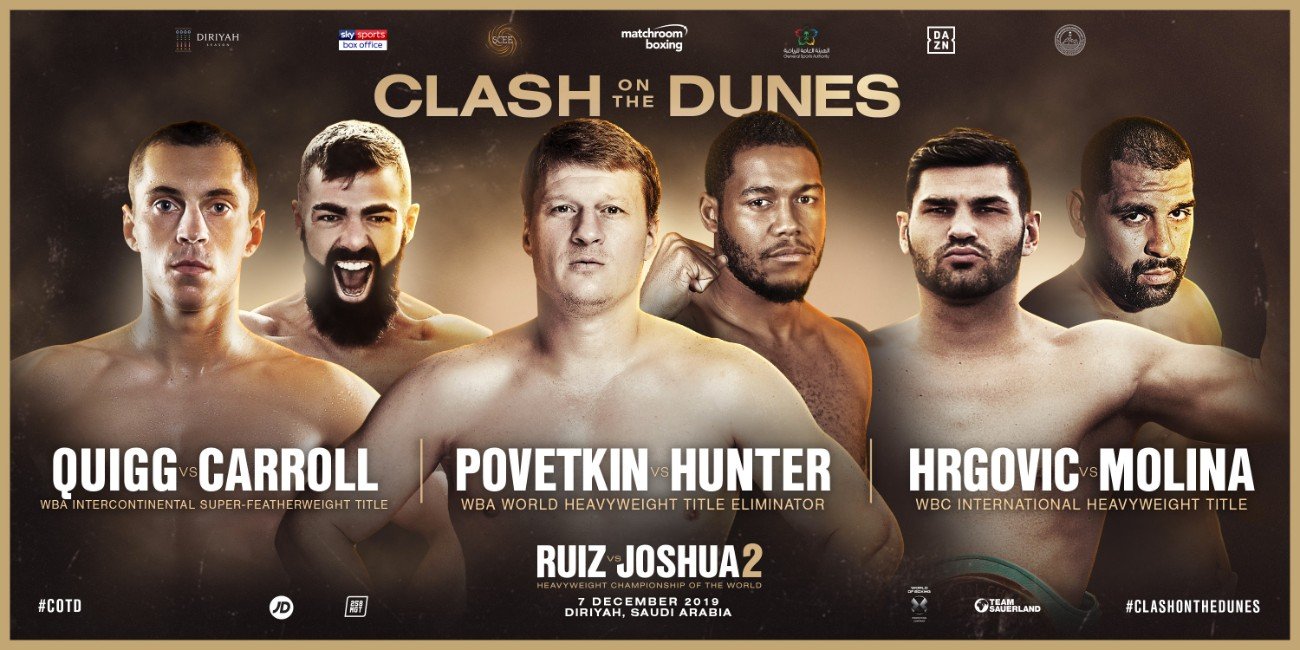 First details of the supporting cast to the colossal Unified Heavyweight World Title rematch between Andy Ruiz Jr and Anthony Joshua have now been confirmed. The rivals will lock horns again at the Diriyah Arena in the Kingdom of Saudi Arabia on Saturday December 7, shown live on Sky Sports Box Office in the UK and DAZN in the US.

‘Sasha’, a 2004 Olympic gold medallist, held the WBA crown from 2011 to 2013, making four successful defences of his belt during that time. He remains one of the most fearsome punchers in the Heavyweight division and is well-known amongst UK fans after his devastating KO of David Price at the Principality Stadium in 2018.

Povetkin fell short in his challenge to dethrone former WBA, IBF, WBO and IBO Champion Anthony Joshua at Wembley Stadium in September 2018 but proved that he still has what it takes to be a force in the Heavyweight division when he outpointed 25-year-old Fury on his return to the UK at The O2 in London in August.

‘The Bounty’ has notched six wins at Heavyweight since moving up from Cruiserweight, with four of those wins coming inside the distance. He impressively stopped the highly-touted Martin Bakole in the tenth and final round of their clash in London last year before travelling to Monte-Carlo to stop former World Title challenger Alexander Ustinov in nine rounds.

The former Olympian stepped up his pursuit of major title fights in 2019 by taking out Fabio Maldonado in two rounds of their May clash in Maryland before inflicting the first defeat on the career of Sergey Kuzmin, outboxing and outclassing the Russian over 12 rounds at the Madison Square Garden Theatre last month.

“Before the fight with Hughie Fury, I hadn’t entered the ring for almost a year, recovering from an elbow surgery, so I’m very glad that I can have another fight this year,” said Povetkin. “Hunter is a strong, highly ranked boxer. I think it will be a good and interesting fight. I’m not going to make any plans for the next year, first I have to go through this fight against Hunter, but I would definitely like to box for the World Title.”

“This is a very exciting opportunity for me, and I have got to prove myself once again,” said Hunter. “Whether you’re the underdog or the favourite it’s all the same because I feel like I am the best fighter out there!

“I look at this fight with Povetkin as my ‘gold medal’ fight. I was in the Olympics and so was he, he won the gold medal and I didn’t so this is basically my gold medal fight right here. I am always pushing for the KO!

“I thrive on making guys quit so I’m definitely going to push for it. I am a boxer first though and I’m certainly going to be boxing his shoes off! If I see any quit in him then I am going to take advantage of that.”

In the third Heavyweight clash of the night, undefeated Croatian star Filip Hrgovic (9-0, 7 KOs) steps up to face former World Title challenger Eric Molina (27-5, 19 KOs) as he puts his WBC International Championship on the line for the third time.

The Rio 2016 Olympic bronze medallist has made a blistering start to his professional career, racing to nine wins from nine fights – with seven of those wins coming by knockout – since making his pro debut at the Arena Riga in September 2017.

Ranked in the top ten in the world with the WBC, WBA and IBF, the 27-year-old already finds himself being propositioned for a World Title shot having been matched aggressively from the very start of this career, landing the WBC ranking title by blitzing Gregory Corbin in the opening round earlier this year.

Molina, a two-time World Title challenger from Texas USA, has mixed it at the top of the Heavyweight division throughout his twelve-year career as a pro. His first World Title attempt came against WBC king Deontay Wilder in 2015 when he took ‘The Bronze Bomber’ nine rounds before succumbing to a stoppage loss.

A year later he travelled to the UK to face IBF ruler Joshua at Manchester Arena and was stopped in three rounds in what was ‘AJ’s’ maiden World Title defence. Fights against Terrell Jamal Woods and Dominic Breazeale followed in 2017 before Molina made his return in February earlier this year, outpointing Nick Guivas in Brownsville.

“I’m very honoured to be a part of this great event,” said Hrgovic. “It is a big step up for me in terms of the level of opponent and the size of the event. The whole world will be watching so this is a big opportunity for me to showcase my skills. I would like to thank my team Team Sauerland, Zeljko Karajica and Eddie Hearn for making this possible.

“I’m expecting a hard fight. Eric Molina has fought two times for the World Title. He rocked Deontay Wilder in their fight and almost knocked him down. He is a very dangerous fighter with a lot of experience. This will be a big step up in competition and I am expecting the hardest fight of my career.”

“I am beyond excited to be a part of this amazing boxing event in Saudi Arabia,” said Molina. “I am grateful to finally be back in the ring and I know exactly what this fight means. Eddie Hearn has given me more than enough time to be physically, mentally and spiritually ready for Hrgovic.”

Manchester’s Quigg, now based in Los Angeles, is itching for the chance to become a two-weight World Champion. He made five defences of the WBA 118lbs crown before losing out to Carl Frampton in a Unification battle at Manchester Arena in 2016.

He was outpointed by Oscar Valdez in an attempt for the Mexican’s WBO Featherweight World Title at the StubHub Center in Carson in March 2018 but now has his sights set on a World Championship at Super-Featherweight.

‘King Kong’ is on the hunt for a second shot at world honours after he returned to action with a win over Eleazer Valenzuela in Mexico following his spirited World Title challenge in Philadelphia in March against IBF Super-Featherweight king Tevin Farmer.

“I am delighted to be on this huge card,” said Quigg. “It is a great platform for me to launch my career forward again and get my name back out there after being out the ring for over 12 months due to injury.

“Despite being out the ring for the length of time I have I expect to be putting in a career best performance and moving back in to the title mix. I look forward to the Saudi Arabian experience and I am privileged to be part of such a special show.”

“In a way, this is even bigger than my world title fight,” said Carroll. “People didn’t know Farmer in Ireland until I fought him, but everyone knows Quigg because Frampton fought him. It’s a huge card and a great opportunity to show the world the best of me.

“I’m sure the fans in Saudi Arabia will be very passionate about such a huge card coming to their front door with a lot of world-class fighters going at it. It’s exciting to be a part of this and it’s another country ticked off the list so I’m proud and happy to be able to show them what I’ve got.”

“Three great fights for what is the boxing event of the year!” said Eddie Hearn. “The world will stop on December 7 to watch Ruiz vs. Joshua 2 and now they have more mouth-watering action to whet the appetite.

“Povetkin vs. Hunter is a brilliant match up with both men looking for a crack at the World Heavyweight Title in 2020 and unbeaten Hrgovic makes his first step up against World Title challenger Eric Molina. In a thrilling domestic battle, Scott Quigg takes on Jono Carroll in what will be a high paced all action war! There’s more to come soon on a night that will go down in history.”

HH Prince Khaled bin Abdulaziz Al Saud, Chairman of SCEE, said: “We are thrilled with the confirmed undercard line up for Clash on the Dunes. Some of the biggest names across the Super-Featherweight and Heavyweight categories will be in the ring at Diriyah Season. Our spectators are in for a night of world class boxing and we look forward to welcoming all fighters to the Kingdom of Saudi Arabia.”