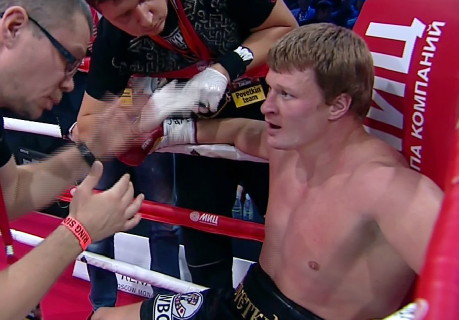 #3 WBA Alexander Povetkin (28-1, 20 KOs) proved his class last Friday night in defeating #5 World Boxing Association (WBA) contender Carlos Takam (30-2-1, 23 KOs) by a 10 round knockout at the Luzhniki Concert Hall in Moscow, Russia. Povetkin knocked a badly hurt Takam down with a hard left hook to the head at the start of the 10th round.

The shot put Takam down on his back, and the fight was stopped immediately. Povetkin had knocked Takam down late in the 9th round with a hard right hand that sent him down partially through the ropes. Takam was able to make it out of the round due to the time expiring, but there was no way that he could recover in between rounds.

Takam looked shaky on his feet as he came out for the 10th, and it was only a matter of seconds before Povetkin put him out of his misery with a crunching left hook to the head.

In rounds one and two, Takam fought well in landing nice jabs and left hooks. However, even at that point in the fight, you could see that Povetkin was going to give Takam problems with his in and out movement, and his excellent inside fighting ability. Takam frequently wasn’t able to land any of his shots while Povetkin stayed at a distance. When Povetkin would come on the attack, he’d jab Takam and then nail him with a left hook or right hand immediately. Povetkin would then get in close and hammer Takam with hard uppercuts or he’d elect to clinch. Takam didn’t have the skillset to work on the inside the way that Povetkin was.

By the 3rd round, Povetkin was clearly in charge of the fight and wearing Takam down with his pressure. In many of Takam’s previous fights, he’d been the one to stalk his opponents and put pressure on them, but that wasn’t the case in this instant. Povetkin was constantly walking Takam down, and battering him with hard shots to the head.

Takam looked exhausted and spent by the 7th round, and it was only a matter of time before he was knocked out. He was still throwing punches, but he looked really tired and didn’t have the power on his shots that he had previously. Povetkin was able to easily elude the shots from Takam at that point in the fight.