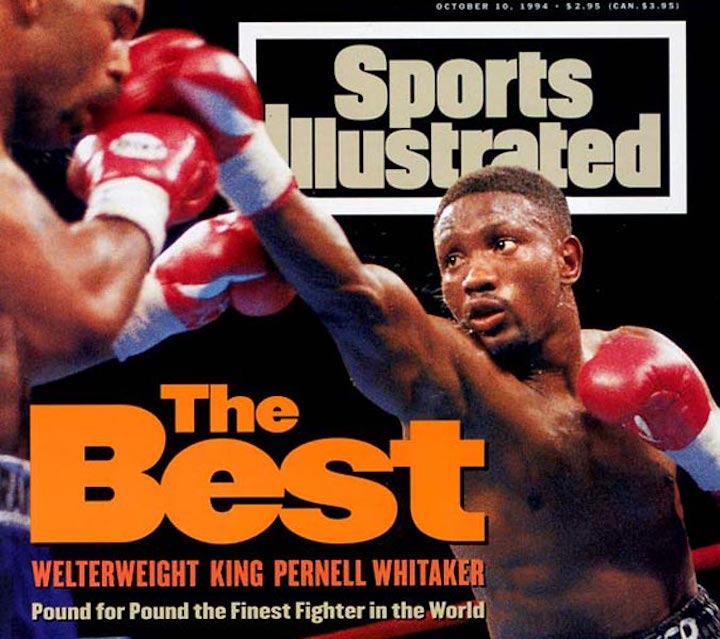 Throughout his long and distinguished career as arguably the finest defensive fighter in boxing history, the complex bag of tricks Pernell Whitaker had at his disposal befuddled, bemused and frustrated many a great fighter. On this day back in 1990, it was Azumah Nelson’s turn to try and solve the puzzle.

Nelson, a fearsome fighter, found out how hard it is to beat the other guy if you just can’t hit him. Whitaker, defending his lightweight crown, was pretty much at his dazzling peak, Nelson had plenty of fight left in him, even if he had turned 31. Moving up from super-featherweight (but smartly deciding against giving up his WBC title), the African warrior suffered the most humbling, frustrating defeat of his entire career.

26-year-old Whitaker boxed superbly, his reflexes as sharp as a razor, his finely tuned boxing brain firing on each and every cylinder. Making the advancing, cross-armed Nelson miss by just a fraction at times, by a country mile on other occasions, “Sweet Pea” was never prettier. They say in boxing a truly great fighter can make a darn good fighter look ordinary. This is just what Whitaker did in Las Vegas 30 years ago. As was written in one of the excellent (and sorely missed) boxing magazines of the day (KO, Ring, Boxing Illustrated), Whitaker was like an artist, painting his masterpiece round by round, the full majesty of his work only truly apparent at the conclusion of the bout.

Whitaker gave the sport the boxing equivalent of a Rembrandt or a Van Gogh on this night.

Nelson, no slouch himself in the boxing department, was reduced to rushing in at Whitaker, slinging leather quite furiously. Nelson, with his sheer determination, did manage to land punches in single digits, but never once did Whitaker look hurt, or even ruffled. Whitaker even lifted Nelson’s leg up in the final round, tapping the far from amused challenger on the back of the head as he did so. This cost Whitaker a point, making the final decision a little closer.

Whitaker went on to dazzle the hell out of greats like Julio Cesar Chavez (who was left more fuming than Nelson had been, even though the Mexican legend was somehow awarded a draw in the 1993 fight with Whitaker), James “Buddy” McGirt (twice) and Oscar De La Hoya (plenty of people feeling Whitaker deserved the decision in the 1997 fight).

Whitaker and Nelson are both great fighters, Hall of Famers. Yet when they matched their wits and their skills against one another it really was no contest. Whitaker was that good.