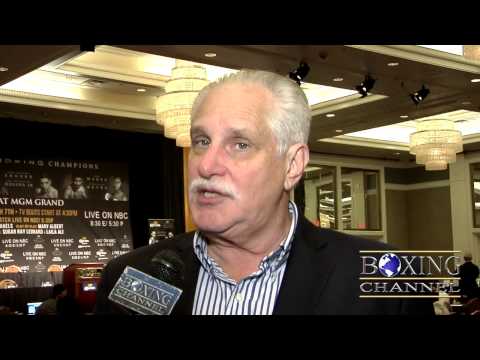 Premiere Boxing Champions (PBC) series kicked off on NBC with junior welterweight Adrien “The Problem” Broner’s one-sided victory over John Molina, Jr. came as no surprise at the MGM Grand in Las Vegas, NV. The surprise was the total ineptitude of Molina. Boxing fans know he is clumsy and without much skill, but they also know he has a big heart and can punch.

Unfortunately, PBC hoped for a barn burner with Molina. Instead the flames were doused when Molina failed to press the fight as promised. He impressed no one except for Referee Robert Byrd, who early on warned him to keep his head up. Molina’s style was head down, eyes closed, throwing wild right hand swings. He impressed no one, including the crowd.

Even those attempts were infrequent, and the crowd uttered its disapproval with loud boos, not much of an auspicious kick off for PBC. Adrien “The Problem” Broner easily controlled the action and pretty much pitched a shutout. The predicament was it was too easy, and it was obvious to the audience that Broner should have risked more and tried to take Molina out. That was “The Problem”.

Regardless of the disappointing opening bout, PBC exhibited class with its debut. Everything was crisp and clean from the camera work to the introductory walk-in of the fighters. The exclusion of the fighter’s cortege and personally chosen noisy babel was greatly appreciated.

It gave the proceedings a sleek, taut air of professionalism, which carried over to the ring. Everything rolled ahead smoothly and problem free. The 20ft ring was occupied by only those directly involved. When the referee called the fighters to center ring, they complied and moved to the designated spot with the head trainer and only him. There was no need for any admonishments.

The main-event proved to be what PBC envisioned. It matched Robert “The Ghost” Guerrero against undefeated Keith “One Time” Thurman. It lived up to the hype. Most experts felt Thurman was too big, too strong, too fast, and too talented for Guerrero. They were correct. However, those same experts felt Guerrero was extremely tough and would give Thurman his toughest fight to date. They were right about that too.

In their minds, the only question was whether Thurman could stop the granite jawed Guerrero? Thurman sure as hell tried. He pounded “The Ghost” from waist to head. He demonstrated excellent boxing skills, darting in and out, side to side, firing off a stiff jab, all the while releasing hard pot-shots and combinations. He made the veteran Guerrero look clumsy and slow, and after landing several right hands, he dropped Guerrero in the ninth.

The Ghost rested on the canvas with gloved hands behind his head like he was pondering retirement. But, the warrior, as he likes to describe himself shook off any such thoughts and got to his feet more determined than ever. He continued to absorb knockout type blows from “One Time”, but mustered up his champion’s type heart and issued himself a call to arms. By that time, One Time was running low on time. He was moving slower, and all of sudden his punches had a little curve to them.

Guerrero was picking them up a bit more. That didn’t mean avoidance, but at least he was seeing those big lead rights. They no longer crunched against his face as a surprise. The real pain was watching. But, all of a sudden, there was a glimmer of hope. Guerrero started landing some of his clubbing shots, and it was obvious Thurman was suffering some pain. He resorted to more lateral movement, but still coupled movement with some pot-shots, mainly straight lead rights.

How “The Ghost” could take them and still move forward was impressive. Analyst Sugar Ray Leonard pointed out the obvious in that most fighters would have been put to sleep by such punches. Guerrero wasn’t sleepy. He continued to press and impress. As someone said, “Thurman won the fight, but Guerrero won the crowd.”

It’s a safe bet PBC will succeed with the package used Saturday. Al Michaels handled introductions. Marv Albert and Sugar Ray Leonard were classy coloring the action, and Kenny Rice did a bang up job with the interviews. Fighters were on their best behavior, including the Problem Child, who explained his more likable self as the result of parenthood and maturing. It’s a welcome improvement. All in all the PBC night was impressive. It proved there is no need for wrestling and MMA type ballyhoo and exaggeration. There is no need for obnoxious behavior (being colorful?), or offensive lyrics and abusive cornermen. Professionalism is the way to go. Advertisers will buy spots and the mainstream crowd will be convinced to jump on for an enjoyable ride and Al Haymon will jumping too, jumping for joy.