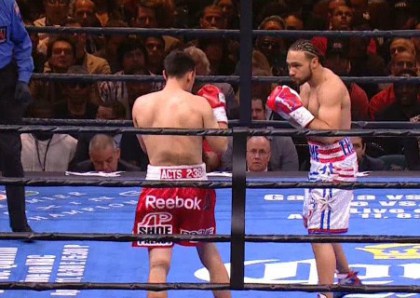 Tonight professional boxing ended its prime time network television drought with the inaugural installment of the so called “Premier Boxing Champions” series. The return of boxing to network television seems to have taken center stage, even to the point of eclipsing the fights and the fighters themselves. While I am not one of those who believe that the future of boxing hinges on the success or failure of this foray into primetime, it’s clear that a lot was riding on tonight’s fight card. To that end we have to thank Robert Guerrero, who took what was shaping up to be a pair of mismatches, and gave the crowd someone to cheer for. In the lead in bout on the telecast, Adrien Broner used a snappy punishing jab to keep an inactive John Molina at bay, cruising to an uneventful 12 round decision. The crowd did not appreciate the lack of action, and at first blush it is easy to cast the blame in the direction of Adrien “The Problem” Broner. However, in light of the punishment that he sustained against Marcos Maidana, it would have been unrealistic to expect Adrien to take any greater risks than he had to in order to secure the victory. He even said as much in his post-fight interview, which was cut short when he started into his racially insensitive “Can Man” routine (which I personally find amusing).

The real problem in this bout was that the normally exciting Molina seemed content to plod around the ring throwing sporadic haymakers from too far away. I could feel Joe Goossen’s pain as he implored his charge to simply throw more punches, and I have to believe that somewhere in his far off underground bunker, puppet master Al Haymon was yelling the same things at a wall sized television monitor. I have no doubt that the folks who put this card together knew that the success or failure of these bouts didn’t lie with the “A” side, but with their dance partners. Molina was brought in to push Broner the way he pushed Lucas Matthysse in their 2014 fight of the year candidate. However, he didn’t, or couldn’t after all his ring wars, and the fight proceeded accordingly. Not that I thought Broner’s performance wasn’t a good one; I know I am probably in the minority when I say that I thought the fight was interesting at times. Even at his most passive I find something entertaining about Adrien Broner. I can certainly understand why the boos rained down, but I was surprised at the over reaction from the Twitter verse, proclaiming the night a failure and giving up even before the main event had started.

Like the opener, most expected the main event to be entertaining, although few if any really gave Guerrero a realistic chance to win. The ghost’s most notable victories had come two weight divisions south of welterweight, and he had the misfortune of being both the smaller and slower man tonight. His edge in experience and track record of never being a KO’ed were enough to suggest that the bout would be competitive in spots and last for the full 12 rounds. The fight started fast, and an unintentional head-butt started a nasty looking hematoma on the forehead of Thurman adding some early drama. However it wasn’t long before “One Time” took control of the bout with harder shots and just a little more movement than was required to keep Guerrero out of range. Guerrero hung in there offering up whatever offence he could until the 9th round, in which he was deposited on the canvas thanks to a series of punches culminating in a well-placed uppercut. Guerrero took the full count, and arose bloody and looking like a fighter who had taken enough punishment for one outing. Thurman jumped on Guerrero and tried to put him away, but the round was coming to a close and the ghost managed to avoid another big shot before the bell. That is the point at which the evening really seemed to turn around.

Guerrero appeared to have the crowd on his side from the opening bell, due at least in part to his wife’s inspirational battle with cancer. That support reached new heights as he came out of the gate in round 10, not looking to survive, but seeking to get revenge for the damage he had sustained in the previous stanza. The cliché here is that the knockdown “woke him up”, but the truth is he fought the remaining rounds with an urgency that had been missing from the ring prior to that moment. Thurman was tiring and at one point languished on the ropes while Guerrero appeared to do his best work of the night. Unfortunately for The Ghost, Thurman had enough left in the tank to keep moving and throw enough effective punches to win out the remaining rounds. When the final bell sounded there was no doubt who would get the decision, but the crowd acknowledged the heart that carried Guerrero thru to the finish. It was pretty clear tonight that it wasn’t the effort of the winning fighter that made the evening. It serves as a reminder that although the “A” side fighters get the money and the marque billing, it is often their less heralded opponents on whom the success or failure of the event resides. The Ghost didn’t technically save boxing, but his game effort will certainly be remembered by all those who tuned in tonight, and will hopefully lead to even more folks tuning in next time. So while it’s nice when boxing gets more network coverage and more prime time TV dates, the truth that all boxing really needs are more fighters like Robert Guerrero.