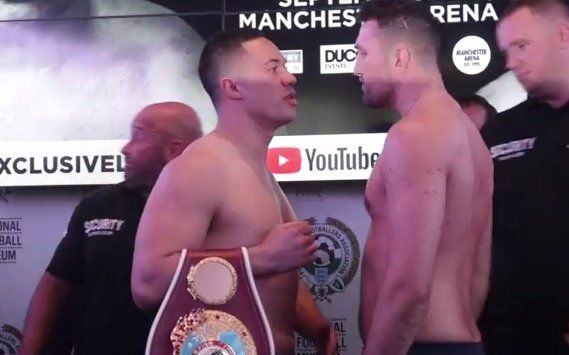 The eight principal fighters for tomorrow night’s Parker vs. Fury Pay-Per-View card all made weight at today'(see below). Tensions erupt when Fury pushed Parker during the traditional face-off and members of both teams went at it before security broke up the altercation.

“Parker vs. Fury”, promoted by Hennessey Sports, is presented in the United States by Integrated Sports Media and Protocol Sports Marketing, Ltd., in conjunction with an internet-based YouTube PPV that is available at www.youtube.com/parkerfury.

Integrated Sports Media will distribute “Parker vs. Fury” live in the United States on cable and satellite PPV via iN Demand, Vubiquity, Sling TV and DISH for a suggested retail price of only $24.95.

All and/or highlights of additional PPV fights will air pending time restraints.

Fights and fighters subject to change.

“Parker vs. Fury”, promoted by Hennessy Sports, is presented in the United States by Integrated Sports Media and Protocol Sports Marketing, Ltd., in conjunction with an internet-based YouTube PPV that is available at www.youtube.com/parkerfury..

Integrated Sports Media will distribute “Parker vs. Fury” live in the United States on cable and satellite PPV via iN Demand, Vubiquity, and DISH for a suggested retail price of only $24.95.

“The Heavyweight Championship of the World is still the biggest priize in sport and it can capture the imagination of the public like no other sport,” promoter Mick Hennessy said. “In my career as a promoter, this is right up there and very personal to me, and we look forward to delivering a fantastic event for the fans.”

The 25-year-old Parker, fighting out of New Zealand by way of Las Vegas, captured the vacant WBO heavyweight title in 2016, taking a 12-round majority decision from previously undefeated Andy Ruiz, Jr. (29-0) in New Zealand. Parker, who stands 6′ 4″, made his first world title defense this past May in New Zealand, winning a 12-round unanimous decision over Razvan Cojanu (16-2).

“I’m excited that the next defense of my WBO World title will be in England because it is now the home of heavyweight boxing and I need to be fighting there regularly,” Parker remarked. “Fighting away from home holds no fears for me. I will arrive having previously fought on the undercard of a Wladimir Klitschko world title fight in Germany, also twice in America. I believe that with so many Kiwis and Samoans living in the UK, I may even have more supporters in the crowd on fight night than Hughie Fury.”

Fury has fully recovered from the back injury that postponed the original May 6 date for him to challenge Parker to Sept. 23 in Manchester.

In 2012, Fury became the first British super heavyweight to capture a gold medal at the World Youth Amateur Boxing Championships and he hasn’t missed a beat as a professional since making his pro debut in 2013.

The 6′ 6″ Fury, who celebrates his 23rd birthday on Sept. 18, will be fighting at home in Manchester. Last year in his two most recent fights, both in London, Fury won a 10-round unanimous decision against former U.S. amateur standout Dominick Guinn (35-10-1), as well as a seven-round technical decision over Fred Kassi (18-4-1).

“I’ve waited so long for this chance and my team have worked very hard to get me this fight,” Fury commented. “I’d like to thank everyone involved. I’m going to shock the world and prove all my doubters wrong and what better place to do it than in my home city of Manchester. Parker is a good fighter and I’ve no doubt we’ll both bring our A-game on fight night. I can’t wait to be crowned world champion.

“Parker is the biggest challenge of my life and he will bring the very best out of me, but I aim to deliver a knockout performance. I’ve prepared like never-before for this fight and pushed myself to the limits and beyond. There’s no way Parker is leaving Manchester with that World title. I will do everything to make sure that belt stays here with me.”

All and/or highlights of additional PPV fights will air pending time restraints.

Fights and fighters subject to change.

Parker, the undefeated WBO World Champion from New Zealand, makes the second defence of his title against Fury, the unbeaten and WBO mandatory challenger, at the Manchester Arena on Saturday 23rd September.

Promoter Mick Hennessy said: “I’m thrilled that BBC Radio 5 Live has secured the radio rights to the WBO World Heavyweight Championship between Joseph Parker and Hughie Fury, and will be broadcasting live from ringside at the Manchester Arena.

“Their expert commentary team and experienced producers will provide excellent coverage for the listeners, and their passion, unique sound and style will deliver an unforgettable presentation in what will be a thrilling night of action.”

“This is by far the best heavyweight world title fight in the division right now between two young, undefeated and world class fighters, a champion and challenger who will put it all on the line in a real 50/50 fight and it doesn’t get any better than that,”

Ben Gallop, Head Radio and Digital for BBC Sport, said: “I am delighted that BBC Radio 5 Live will be broadcasting live radio commentary of Parker v Fury later this month. This WBO World Heavyweight Championship title fight is an exciting proposition and 5 Live’s exclusive blow-by-blow commentary will ensure fans won’t miss a moment of the action.”

Former world title challenger Jimmy Kelly is looking forward to putting on a career-best performance under the big lights on September 23, and believes his WBO Intercontinental super-welterweight fight with Stiliyan Kostov could be fight of the night, exclusively live on YouTube (www.youtube.com/parkerfury)

Kelly and his Bulgarian opponent will go head-to-head on the undercard of the hugely-anticipated Joseph parker versus Hughie Fury, WBO world heavyweight title fight show at Manchester Arena on September 23,

Kelly’s mild-mannered appearance belies the fact that he can really fight. The 25-year-old has knocked out eight of his 22 victims, with just one reverse on the Wythenshawe man’s ledger – a seventh round defeat to Liam Smith for the Liverpudlian’s WBO light-middleweight belt in December 2015.

Kostov should prove a tough and dangerous test for home fighter Kelly, and will be determined to return to his East European base with the WBO strap around his waist.

Vastly experienced, the 31-year-old has visited these shores previously, facing former British champion Brian Rose and big-punching Adam Etches. With 16 knockouts from 21 wins, and just seven defeats, the hard-hitter won’t be fazed by the Kelly challenge, but Jimmy says he won’t let the Bulgarian banger wreck his future dreams.

“His record suggests he can punch a bit. He’s been stopped a couple of times, but he’s been the distance with the likes of Brian Rose, so he’s quite durable too,” stated Kelly. “He can obviously whack and throws a lot of wide punches, so I need to be wary of his power but I’m prepared and looking forward to it.

“I definitely think this could be fight of the night. He’s an all action fighter, comes forward and throws shots looking for the stoppage. He won’t be coming over here to make up the numbers either, and he has his own ambitions to win the title. But I’ve got my own ambitions too, and want to move up the rankings, and get another world title fight. But, yeah, this one could well make fight of the night.

“In hindsight, maybe the fight against Liam [Smith] came too soon, but at the time I wasn’t there to play a bit part. I was convinced I’d get the win, and thought it was my time. I was only young though, I’m 25 now, but back then was a boy. I’m coming into my prime now and I’m looking forward to the future. Miguel Cotto has the title at the top of the WBO division, and it would be a dream come true to get a fight like that against someone I’ve grown up watching.”

Parker v Fury is exclusively live on YouTube at the special advance purchase offer price of only £9.99 in the UK and €11.99 in the Republic of Ireland until midnight on Sunday 17th September.*