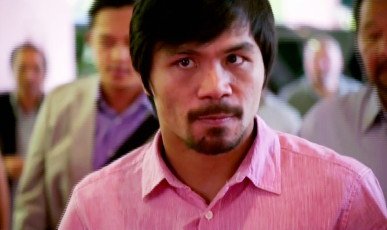 Martyniouk, one of four sparring partners that Pacquiao will be using to get ready for the 5’10” Algieri, thinks that Algieri will have a tough time with the speed and power of Pacquiao next month. Martyniouk says that he learned a lot from the sparring session with Pacquiao.

“Let me just say he is already in fight shape. I don’t think it will be a tough fight for Manny. But it will be a very tough fight for Algieri,” said Martyniouk to Rappler.com. “Some of the punches he throws are very fast and you don’t see them and that’s what he is going hurt Algieri with.”

Algieri isn’t the type of fighter that stands in one place for any length of time so it might be a tougher fight for Pacquiao than Martyniouk thinks it’ll be. If Martyniouk is mimicking Algieri’s fighting style and still having problems with Pacquiao then it’s possible that Algieri could struggle. But Martyniouk is a completely different fighter than Algieri, and it’s doubtful that he’s been able to properly mimic Algieri’s constant movement.

Martyniouk doesn’t move a lot in his fights, and he’s not the first person I would think of if I was looking for a guy to get me ready for a fighter as mobile as Algieri. If Martyniouk is having problems with Pacquiao’s speed and power then it suggests that he’s not moving enough and is standing in front of him for too long of a time.

Pacquiao is tricky if you stay in front of him, but if you use your boxing skills as Tim Bradley and Juan Manuel Marquez have used in their fights against him then he’s very beatable.