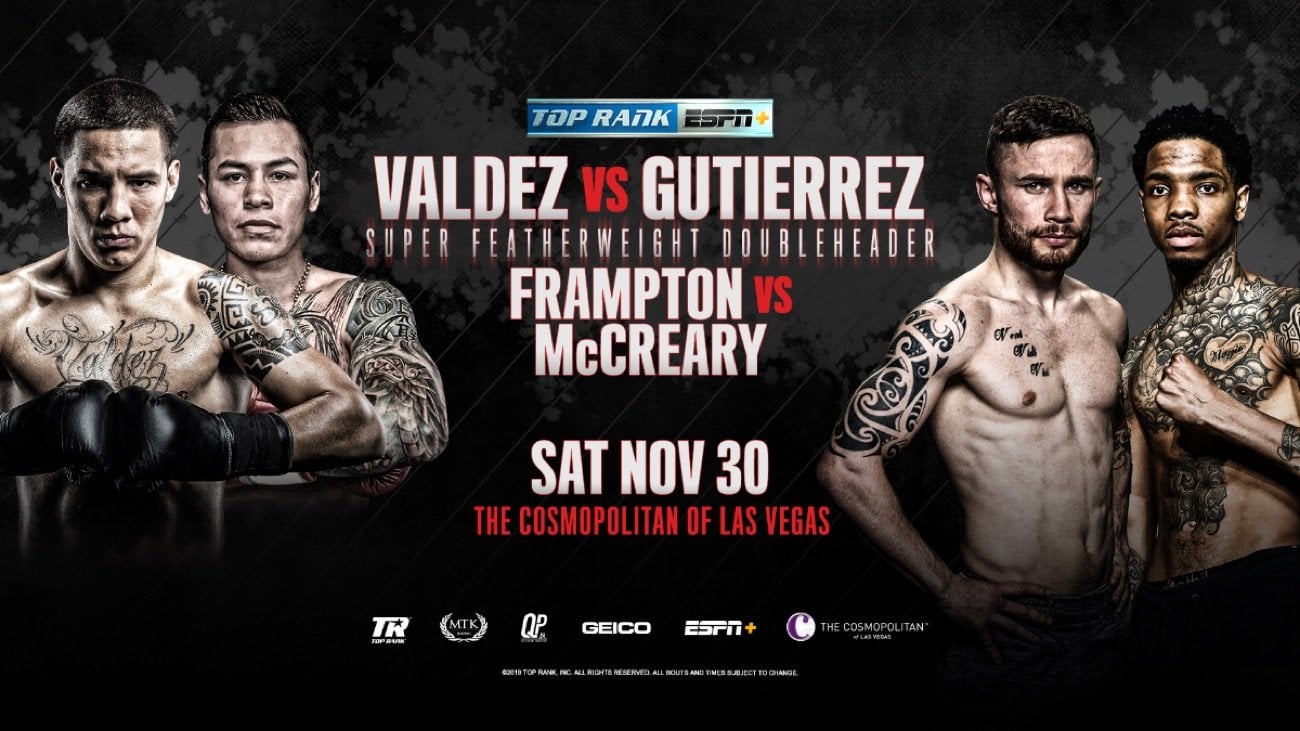 Two of boxing’s foremost action stars are set to light up the Las Vegas Strip for a Thanksgiving Weekend fistic bash Saturday, November 30 at The Chelsea inside The Cosmopolitan of Las Vegas.

The co-feature will see the fighting pride of Belfast, former two-division world champion Carl “The Jackal” Frampton, take on the unbeaten Tyler “The Golden Child” McCreary a 10-round super featherweight contest (128-pound catchweight).

Valdez-Gutierrez and Frampton-McCreary will stream live and exclusively on ESPN+, the leading multi-sport streaming service, starting at 10 p.m. ET/7 p.m. PT. The undercard will stream on ESPN+ beginning at 6:30 p.m. ET/3:30 p.m. PT.

‘I’m looking forward to November 30, as it’s my first fight as a super featherweight,” Valdez said. “I know my opponent is tough, but I plan on putting on a show for the fans. This is my third camp with Eddy Reynoso, and it’s going great. This is an important first step towards another world title, and I plan to make the most of it. Don’t miss it!”

“I am going to take full advantage of this opportunity,” Gutierrez said. “I hope Valdez is prepared for a super featherweight war. I’m now training in Las Vegas with the professor, Ismael Salas, and ‘Memo’ Heredia. Boxing fans, get ready for a true Mexican-style battle!”

Valdez (26-0, 20 KOs) made six successful defenses of his WBO featherweight world title, a reign highlighted by all-action brawls against Miguel Marriaga, Scott Quigg and Genesis Servania. A two-time Mexican Olympian, Valdez is seeking new challenges in a weight class loaded with premier talent. He closed out his featherweight world title reign with a pair of wins over then-unbeaten foes earlier this year, knocking out Carmine Tommasone in February and scoring a unanimous decision over Jason Sanchez in June. Valdez is 6-0 with six knockouts when fighting in Las Vegas and is looking for lucky number seven. Gutierrez (38-2-1, 25 KOs) has won three consecutive fights since dropping a technical decision to Abner Mares in October 2017 for the WBA featherweight world title. He last fought June 22 in San Juan del Río, Mexico, decisioning former world champion Tomas Rojas over 12 rounds.

Frampton (26-2, 15 KOs), a former super bantamweight and featherweight world champion, is ready to make his 2019 debut. He last fought December 2018 in Manchester, England, losing by unanimous decision to IBF world champion Josh Warrington in a Fight of the Year contender. He was scheduled to fight August 10 in Philadelphia against Emmanuel Dominguez but was forced to drop out the week of the fight after a concrete pillar fell on his hand at the fight hotel. Frampton is making his first appearance in Las Vegas since January 2017, when thousands of Northern Irish fans made the trip across the pond for his rematch against Leo Santa Cruz. One of his nation’s most decorated fighters, Frampton holds victories over Santa Cruz, Quigg, Nonito Donaire and Kiko Martinez.

McCreary (16-0-1, 7 KOs), from Toledo, Ohio, is a five-year pro who, at 26 years of age, is entering the prime of his career. In his last fight, July 19 in Oxon Hill, Maryland, he overcame a stiff challenge from Jessie Cris Rosales to prevail via eight-round split decision. In search of a signature win, McCreary will take a quantum leap in class, but he is confident that his youth and athleticism will prevail.

“I’m delighted to be making a comeback after what has been a horrific year in my career,” Frampton said. “I didn’t get the Top Rank deal off to an ideal start, but coming back in Vegas is great for me, especially against a really strong opponent. It needed to be someone who would test me. It’s what I want, it’s what ESPN wants, what MTK Global wants and what Top Rank wants, so I’m 100 percent confident it’s the right move for me. McCreary is a quality opponent, but if I want to be competing against the top guys in the world, which I believe I can, then I need to be beating guys like him and doing it in style.”

“I’m delighted we’ve got Carl out again before the end of the year,” said Frank Warren, Frampton’s co-promoter. “He had a tough time of it in August with the freak injury, which meant he couldn’t fight as planned. In this fight against McCreary, I believe Carl will prove that he is still an elite fighter and will be fighting for world titles again before long.”

“It’s a big step up for me, but I feel that I’m ready for it,” McCreary said. “It’s an opportunity I couldn’t turn down, and I feel that every fight is a risk. This is one where, if anything, I would love to risk my undefeated record against a fighter like Frampton. A win here means a world title shot next.

“I was in the gym training for my October 26 fight and my trainer {Lamar Wright} said we got a call that Carl Frampton was looking for a fight. They didn’t have anyone, and I said, ‘I’ll take it.’ I didn’t hesitate.”

Use the hashtags #ValdezGutierrez and #FramptonMcCreary to join the conversation on social media.