Ho, hum, more crazy talk about another crazy fight. What are we to do but just run with it! Oscar De La Hoya (who may or may not go ahead with his fight with Vitor Belfort, now in the works for November 27), has offered Floyd Mayweather the staggering sum of $100 million to fight him in a return meeting of their 2007 “The World Awaits” showdown.

The folks at TMZ Sports have the story, and 48-year-old De La Hoya – who had to withdraw from his September 11 fight with Belfort due to catching COVID-19 – called out Mayweather yesterday, offering “Money” the huge sum. 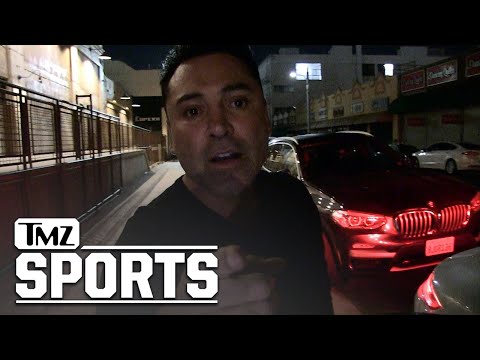 The first question that springs to mind is, has De La Hoya got that kind of dough at his disposal? If he has, and if the offer is legit, it’s tough to see Mayweather turning it down. We all know how much “Money” loves the stuff, how Mayweather can never say no to a gargantuan payday. What’s more, 44 year old Mayweather might look at a De La Hoya rematch as an easy or safe fight. We know Mayweather doesn’t like taking risks (his thing since “retiring” has been to engage in big-money exhibition bouts against opponents who never had a prayer of beating him – Tenshin Nasukawa and Jake Paul).

De La Hoya wants a real fight, not an exhibition, and the (sad) truth is, the world, or at least a decent portion of it, would watch this rematch if it did happen. Would Mayweather-De La Hoya II pull in enough money for Oscar to be able to recoup his $100 million? Maybe not. But let’s not get ahead of ourselves. Is De La Hoya’s offer legit, and will Mayweather accept it if it is?

For the record, De La Hoya is 39-6(30) and he last boxed in December of 2008 when he was beaten by Manny Pacquiao. Mayweather is 50-0(27) and you have to go back to August of 2017 for his last “real” fight, this the win over Conor McGregor. Plenty of fans dismiss that bout as a “real” fight, and go back to Mayweather’s September 2015 win over Andre Berto as his last genuine fight.