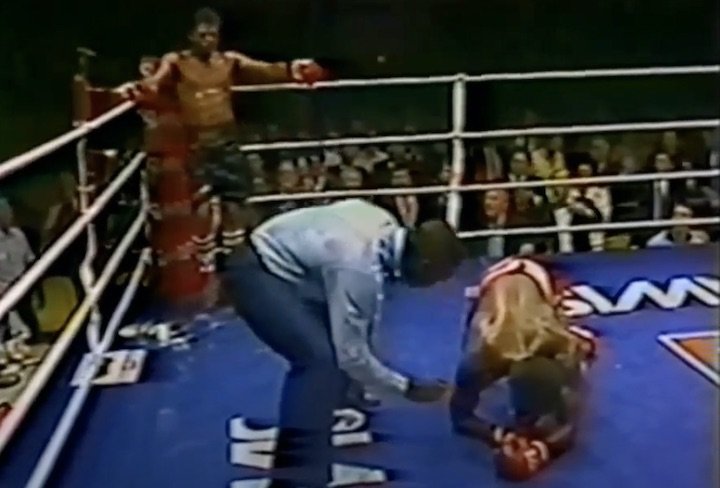 Without knowing it, Sly Stallone predicted the ending to a very real-world title fight with the “over the top” ending he penned for and then directed in his film “Rocky II.” Well, sort of. Fight fans are familiar with the way, in the 15th and final round of their rematch, the fictitious Rocky Balboa and Apollo Creed both go down at the exact same time, the battle to beat the count proving a thrilling if “over the top” ending to the fight and the film.

Rocky got up, Apollo didn’t.

This was back in 1979, but in October of 1985 (35 years ago today in fact) fight fans witnessed an ending to a world cruiserweight title fight that was almost a carbon copy of the scripted big fight climax.

Lee Roy Murphy met Chisanda Mutti in Monaco and the two men put on a quite brutal yet wonderfully entertaining fight. Both men went at it and this particular slugfest would have proven memorable, would have been worth watching again today, even without the stunning ending. The taller Mutti, born in Zambia, took the heat right to defending champion Murphy and the war was on.

Shakur Stevenson Calls For Oscar Valdez Next: What Are We Waiting For?

Neither man had what could be referred to as a tight defence, with both men taking turns knocking lumps out of each other. A number of rounds stood out as being especially crammed full of action – the eighth, when Mutti snapped Murphy’s head back a number of times with his cracking right hand, the ninth, when a series of hurtful shots from the challenger had Murphy in bad shape and then down, the 11th round, when Murphy returned the favour and decked the challenger. Really, this thrilling two-way fight could have been over two or three times.

And then came the almost unbelievable ending.

Mutti, who was 23-4-2 at the time of the fight, his first shot at a world title, had come up the hard way. Fights with the likes of Jeff Lamkpin (a draw), Tony Sibson (a points loss, this, down at middleweight, in Mutti’s fourth pro fight!) and Tom Collins (a points win) had tested the 28 year old and now he was hungry for the IBF title.

Murphy was a year younger and he was unbeaten at 22-0 at the time of his second title defence. Like Mutti, the warrior from Chicago had been tested on the way up; if not quite as severely. Murphy defeated Marvin Camel to become IBF cruiserweight champ and he then retained the belt with a win over Eddie Taylor, both wins coming via TKO. Murphy and Mutti put each other through hell as they punched themselves into exhaustion in the fight from 35 years ago today.

It was a genuine, ‘I’ll hit you, you hit me’ affair, with neither guy willing to yield. And then came that surreal ending. Fighting in a corner during round-12, both guys crashed home with right hands, the simultaneously landed blows scoring a double knockdown. And as was with the case with the fictitious Apollo Creed, Mutti was too shattered to be able to rise before the count of ten (in fact, hurt bad, Mutti was down way longer than that). Murphy beat referee Larry Hazzard’s count and he was still champion.

Bob Arum: 'Fury is going to knock Wilder on his a** quicker this time'

It was the wildest ending to a fight that had been both grueling and damaging for both fighters all the way through. A genuine classic in a number of ways, the Lee Roy Murphy-Chisanda Mutti fight deserves a special place in modern-day boxing history.

Sadly, Mutti died at the young age of 38, in 1995. Murphy, who went on to make one more successful defence of his title (beating Dorcy Gaymon) before losing to Rickey Parkey, is today in good shape.