During his long and distinguished ring career, Muhammad Ali was only ever cut once. It was 50 years ago today when Ali, having notched up eight wins since losing “The Fight of the Century” with Joe Frazier, met devastating light-heavyweight king Bob Foster in Tahoe, Stateline, Nevada. Defending his NABF heavyweight strap, the former world ruler predicted an eighth round KO win over Foster.

Ali was bang on the money, yet he would bleed before stopping “The Sheriff.” 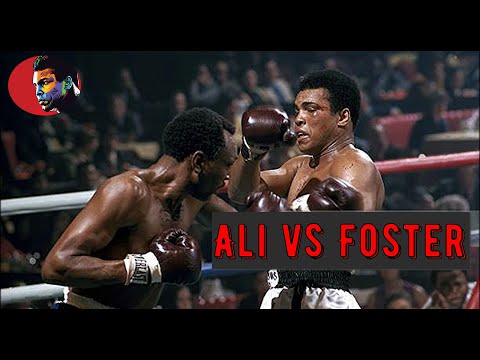 Foster was incredible as a 175 pounder; his lean and long frame giving no indication of the kind of chilling knockout power he was armed with. Foster had laid out or stopped no less than 40 men prior to his fight with Ali. But as a heavyweight, Foster was a mere mortal. With his own crippling power failing to have anything like the same effect on the big men (Foster had been crushed in two rounds when he met Frazier in 1970), Foster’s chin wasn’t capable of taking a natural heavyweight’s bombs.

Ali was no killer puncher like “Smokin’ Joe” was, yet Ali’s super-fast hands were capable of hurting a foe. And against Foster, Ali wanted the stoppage win. Ali, now aged 30, weighed-in at 221 pounds, this some 40 pounds heavier than Foster, who was also 30. Ali was in command in the early rounds, even if there was not too much action going on. Ali played with Foster, he danced, he dropped his hands, he taunted his man.

Then, in the fifth, Ali got serious. After taking a dangerous-looking left from Foster, Ali was cut above the left eye, the sight of Ali’s blood enough to send commentator Howard Cosell into something of a tizzy. Ali then dropped Foster with a right hand. Bob was hurt and he was forced to use the ropes to haul himself upright. Foster would visit the canvas a further six times before the fight was over. Ali was in full punching mode here in the fifth and Foster tried to fire back. All of a sudden, it was a real challenge that Ali was facing. Foster, tired and wild with his shots, was downed for a second time. But Ali was feeling the pace himself, the fight being fought at high altitude. Ali resumed his attack and Foster was down again in a flash. Ali was bouncing punches off Foster’s head and down the reigning light-heavyweight champ went again before the hectic round came to an end. Foster barely scraped himself off the mat at the bell.

Ali was on his toes in the sixth, while Foster was trying to get home with that one big punch. Bundini Brown was screaming and crying as he bellowed instructions to Ali. Ali struck again in round seven, a right/left combination dropping Foster yet again. Yet once again Foster dragged himself upright. Then it seemed as though Foster had at last hurt Ali. A right hand caught Ali and the great man’s legs dipped. But Ali was play-acting. Foster got home with two more rights but Ali continued with his comedy routine. Ali then blasted Foster to the mat with another left hand.

Ali closed the show in the eighth, dropping Foster one last time before referee Mills Lane counted Foster out. It had been a wild, at times totally one-sided, at other times briefly competitive fight, full of drama. Ali had made his prediction stick and he carried on in his campaign to regain the world title. Foster dropped back down to light-heavyweight, where he continued to rule the world as WBA and WBC king. It would be over six years before Foster lost another fight.