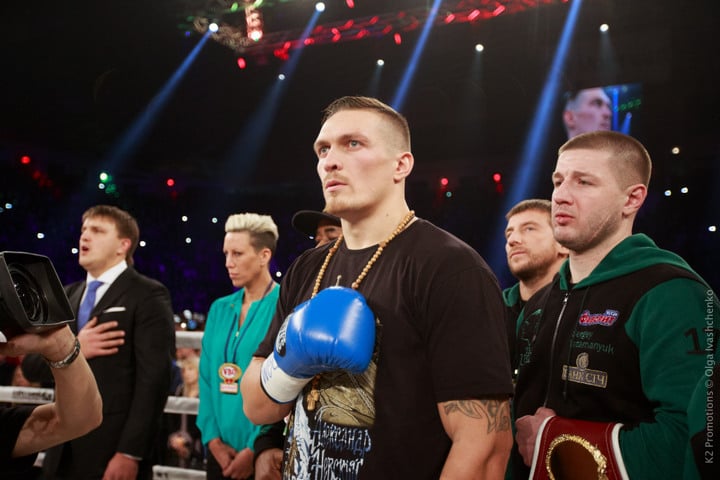 The Usyk-Mchunu 12-round clash is presented by K2 Promotions in association with Main Events and will open the HBO telecast headlined by the light heavyweight clash between Two-Division World Champion and Future Hall-of-Famer Bernard Hopkins, (55-7-2, 32 KOs) and hard-hitting contender Joe Smith Jr., (21-1 18 KOs) and a 10-round co-main event between Joseph Diaz Jr. and Horacio Garcia who will clash for the NABF Featherweight Title.

“This is a great opportunity, I’m very excited to fight for the first time in the United States and on HBO,” said Usyk. “After winning the world title in September, fighting in America was the next goal and I promise the fans in Los Angeles and those watching on HBO a great performance,” said Usyk, known for his world class performances, heavy hands and his memorable victory dances.

“Against good opposition, I ‘The Rock’ always rise to the occasion, “said Mchunu. “I’m eagerly focused on the throne!”

“Oleksandr is very anxious to fight in the United States, he wants to be known as a true world champion, the same status the Gold Medal provided him as an amateur,” said Alexander Krassyuk of K2 Promotions Ukraine. “We’re very thankful to HBO for this opportunity and see this as just the first step towards Oleksandr becoming a superstar in the United States.”

Said Tom Loeffler, Managing Director of K2 Promotions, “We’re very happy to bring Oleksandr to the United States. He has drawn large crowds to his fights in Ukraine and there is much anticipation for him coming to America and to become the next boxing superstar. His entertaining, all-action style will be a thrill for fight fans at the Fabulous Forum and those watching on HBO. Having seen the Los Angeles fans’ reaction to both Gennady Golovkin and Roman Gonzalez’s fights at The Fabulous Forum with its rich boxing and entertainment history, this venue is a special place for star making performances.”

Stated Kathy Duva of Main Events, “Thabiso jumped at this opportunity the moment the offer was conveyed without hesitation. He is coming to win and it will be a great fight. I would also give all the credit in the world to Usyk for taking on such a tough challenge in his first defense of the title.”

The 29-year-old Usyk capped an extraordinary amateur career winning Olympic Gold at the London Games in 2012. Signing with K2 Promotions, Usyk scored knockouts in his first nine bouts in front of huge crowds in Ukraine and Germany. On September 17, 2016, Usyk won the WBO Cruiserweight World Title from champion Krzysztof Glowacki, brilliantly dominating the action over 12 rounds in Gdansk, Poland. The unanimous decision championship victory in Usyk’s tenth professional bout broke the previous record of twelve fights held by Future Hall-of-Famer Evander Holyfield. Usyk is currently world ranked in the cruiserweight division, #2 by ESPN and USA Today and #3 by Ring Magazine.

The 28-year-old Mchunu is world ranked #9 by the WBC, #13 by the WBO and #14 by the IBF. Although based in South Africa, he has fought and been victorious on three previous occasions in the United States. Making his U.S. debut on August 3, 2013, Mchunu won a 10-round decision over former world title challenger Eddie Chambers. In 2014, the southpaw also won 10-round decisions over Garrett Wilson and Olanrewaju Durodola. Most recently Mchunu knocked out Boniface Kabore in the second round on May 20, 2016 in South Africa.

Hopkins vs. Smith is a 12-round light heavyweight battle presented by Golden Boy Promotions in association with Star Boxing. Diaz vs. Garcia is a 10-round NABF featherweight title match up presented by Golden Boy Promotions. Usyk vs. Mchunu is a 12-round WBO Cruiserweight World Title battle presented by K2 Promotions in association with Main Events. The event is sponsored by Cerveza Tecate, BORN BOLD and Casa Mexico Tequila. The event will be televised live on Saturday December 17, 2016 from Inglewood California’s “Fabulous” Forum on HBO’s flagship series beginning at 10:00 p.m. ET/PT.