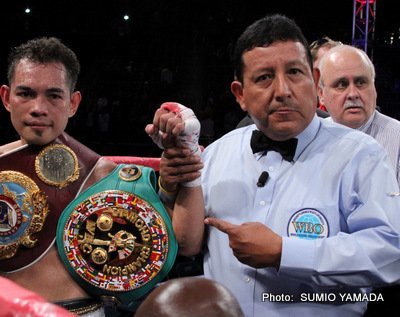 By Joseph Herron – Since bursting onto the big stage of boxing with one crushing left hook to the chin of the most feared Flyweight in the world circa 2007, Nonito Donaire has been one of the most dominant fighters in boxing. With lightning fast reflexes and freakish power for a lower weight division fighter, “The Filipino Flash” has made twenty nine consecutive victories look like an easy month at the office.

But like many dominant fighters of years past, Nonito Donaire currently finds himself in somewhat of a boxing quandary.

It seems the 29 year old fighter’s reputation has preceded his presence in the ring since placing a dent in the face of Fernando Montiel on HBO last year; not only to his opposition, but to the fans of boxing as well.

Since destroying the three division world champion on February 19th, 2011, most of Nonito’s opponents have receded into a timid and unwilling shell while standing in the ring with the pound for pound fighter. Although it’s an amazing testament to the talents of the proud Filipino pugilist, it doesn’t make for a very eventful evening of boxing.

After Donaire’s third championship victory in the Super Bantamweight division on Saturday, October 13th, his opponent admitted that his reluctance in the ring was intentional.

“The difference in the fight was the speed and I had to be careful,” stated Toshiaki Nishioka. “I had never faced a fighter with the speed of Donaire.”

The statement came from an eighteen year fight veteran who hadn’t tasted a knock-out defeat since 1995.

Despite closing the show in style by stopping the former WBC Champion and putting on a virtuosic performance, fight fans in attendance were heard booing frequently throughout the tactical but brilliant chess match in the ring.

In all fairness, Donaire did have to follow a show stealing performance like Rios/Alvarado, which is the boxing equivalent of a technically brilliant symphonic orchestra having to hit the stage after a performance from Bruce Springsteen and the E Street Band.

Nonito’s 2011 dramatic knock-out performance over Fernando Montiel has set the bar so ridiculously high, that fight fans have become somewhat spoiled if the hard punching Filipino doesn’t produce immediate fireworks in the ring. But because of that same singular title winning effort on the biggest stage of boxing last year, most fighters are less than intrepid when facing one of the most amazingly talented fighters in boxing.

It seems that Nonito Donaire has just entered the “Pacquiao Zone”.

In 2009, Manny Pacquiao knocked out two of the best fighters in their respective weight divisions to win fighter of the year honors by Ring Magazine. After starching the British Hitman with one of the hardest left hooks in recent memory, and bludgeoning the rugged Puerto Rican over twelve brutal rounds, the Pacman was recognized as one of the most entertaining and explosive fighters in boxing.

After the two breathtaking performances on HBO PPV, most fight fans came to expect a sensational knock-out performance whenever the Pacman graced the big blue canvas. But not only was it difficult to land critically “suitable” opposition, it became equally grueling to find fighters who were willing to open up and render themselves susceptible to Pacman’s offensive attack.

Pacquiao’s next bouts were an overmatched and very defensive Joshua Clottey, an undeserving Antonio Margarito, and a very uncharacteristically tentative Sugar Shane Mosley.

While Manny remained in his winning ways throughout all three bouts, he did very little to capture the imagination of the boxing world and garner the respect of the always scrutinizing fight critics. In retrospect, the pugilistic bar was set too high after romping over Oscar De La Hoya, Ricky Hatton, and Miguel Cotto consecutively.

Was it a realistic expectation by everyone in the boxing community to expect a brutally brilliant knock-out performance at the highest level of the sport on a consistent basis?

Was the criticism of Manny’s subsequent three efforts justifiable?

Of course it wasn’t.

Is the scrutiny Nonito Donaire currently receives by many fight fans and critics alike after defeating four world champions consecutively in dominant fashion reasonable as well?

What the “Filipino Flash” is currently experiencing resembles what every elite level fighter goes through after being inducted into the fight public’s mythical pound for pound list.

Every special talent that has ever stepped through the ropes has their share of naysayers and critics…the select few who tune in just to see if the “chosen ones” will falter. The boxing critics who embrace a so called insight, guised with negativity.

Floyd Mayweather Jr, Larry Holmes, Wladimir Klitschko, Manny Pacquiao…they’ve all experienced it. No feat will ever be sufficient to appease their insatiable appetite for cynicism.

My advice to the detractors of boxing:

The past is history…the future is a mystery…and today is a gift. That’s why it’s called the present.

Don’t waste your time pining for the boxing heroes of yesteryear…embrace the elite fighters who currently treat us with their talents in the ring. They won’t be in their respective primes forever.

Welcome to the zone, Nonito…you’ve made it!