The term ‘closet classic’ must have been invented for this fight.

There are, as avid, hardcore fight fans know, some real gems out there that are waiting to be found, as well as rediscovered. And, thanks to You Tube, these below the radar wars/slugfests/all-time classic fights can be found. Just last week, the writer saw a You Tube offering that proved irresistible, simply due to the words chosen to describe the fight:

“The greatest fight in Japanese boxing history,” it read (or words to that effect).

And, guess what – the kind fellow who uploaded the fight that is the subject of this article was NOT exaggerating. Not one bit.

Back in January of 1989, California-born Anthony Brooks was a Japanese citizen who had boxed in the country since 1984. Now going under the name of Mark Horikoshi, the 27 year old was the reigning Japanese super-bantamweight champion; with him having made six retentions of the belt. Now, going up against 22 year old Naota Takahashi, Brooks/Horikoshi was about to play his part in a fight that can only be described as unbelievable.

Horikoshi entered the ring inside the famed Korakuen Hall with a 17-1(13) record, while challenger Takahashi was 15-2(10). The fight these two gave their all to bring us makes a ‘Rocky’ film look dull.

After two technical opening rounds, where both guys boxed, with Horikoshi using his left jab to good effect, all hell broke loose, and then continued to consume everyone – the two fighters, the fans in attendance, the commentators calling the action – right until the end of this wild and crazy brawl.

Towards the end of the third, Horikoshi shook Takahashi but good, the younger man being raked by a left hook and then a right hand that had him almost falling as he was on the ropes. Round four was utter carnage. Horikshi, on the hunt and looking to end matters, blasted his rival with a hard right to the head and then followed up with a furious assault to head and body. The defending champ was unloading everything, as well as shoving his man around so as to get room to punch even more effectively. But, as hurt as he was, Takahashi managed to roar back.

These two unheralded, underpaid fighters slugged it out, toe-to-toe, for over 90 hellacious seconds. It was breathtaking. And then, somehow, Takahashi was able to tag his man with a right hand to the chin that sent Horikoshi down. His legs gone but his desire to attack still with him, an advancing Horikoshi was then sent to the mat again, his legs having lost a good deal of strength. Almost spitting at the referee, a defiant Horokoshi insisted he had slipped.

The savage action continued, and Takahashi was all over the champion, blasting him with both hands. Only for Horikoshi to rally back, landing two hard rights to the head that saw the momentum switch once again! The two then slugged it out to close out one of the greatest rounds in modern day boxing history.

The heat was not ready to cool down yet.

Round five saw Takahasi stun Horikoshi with another right to the head, with the defending champ this time electing to hold on. The haymakers then resumed, with both fighters whipping in hooks in a desperate effort at ending things. The sixth round kind of, sort of saw both men try to get back to boxing, with plenty of jabs thrown from both sides. Then, in the seventh round, a massive head-snapping right from Horikoshi had the challenger in bad shape, with Takahashi then having to soak up everything the ferocious champion could muster.

Round eight saw Horikoshi club his rival to the mat, with Takahashi going down on his knees, his head touching the canvas. The fight was over – surely. But no, Takahashi scraped himself upright and back he fought. Yet more intense trading ensued, with both men being jolted and buzzed. By this point in the fight it was clear both men were giving way too much.

Round nine was scary. Horikoshi, on the attack again, had Takahashi all over the place, the fight now nothing but a street battle. By this stage the fight could have been stopped around three or four times, yet on it raged. The end came, finally, after Takahashi further smashed the equilibrium of Horikoshi, his legs forced to do a wild dance. Down Horikoshi went, only to bounce right back up, grinning at his rival.

The two engaged in a rare clinch, before Takahashi smashed home a big right hand to score yet another knockdown, the number of which the crowd had surely lost count of by now. On sheer instinct, Horikoshi got up, but he was gone; the fact apparent by the way the soon to be former Japanese champion was falling all over the ring when attempting to show that he was unhurt.

And that was it. One of the most mesmerising action fights you may never have seen was over. All that is left to say is this – go ahead and find this fight for yourself. Guaranteed here is the fact that you will NOT regret it. 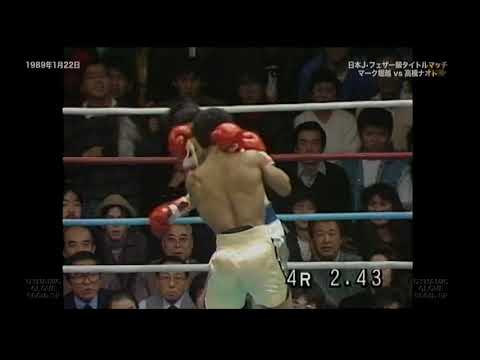