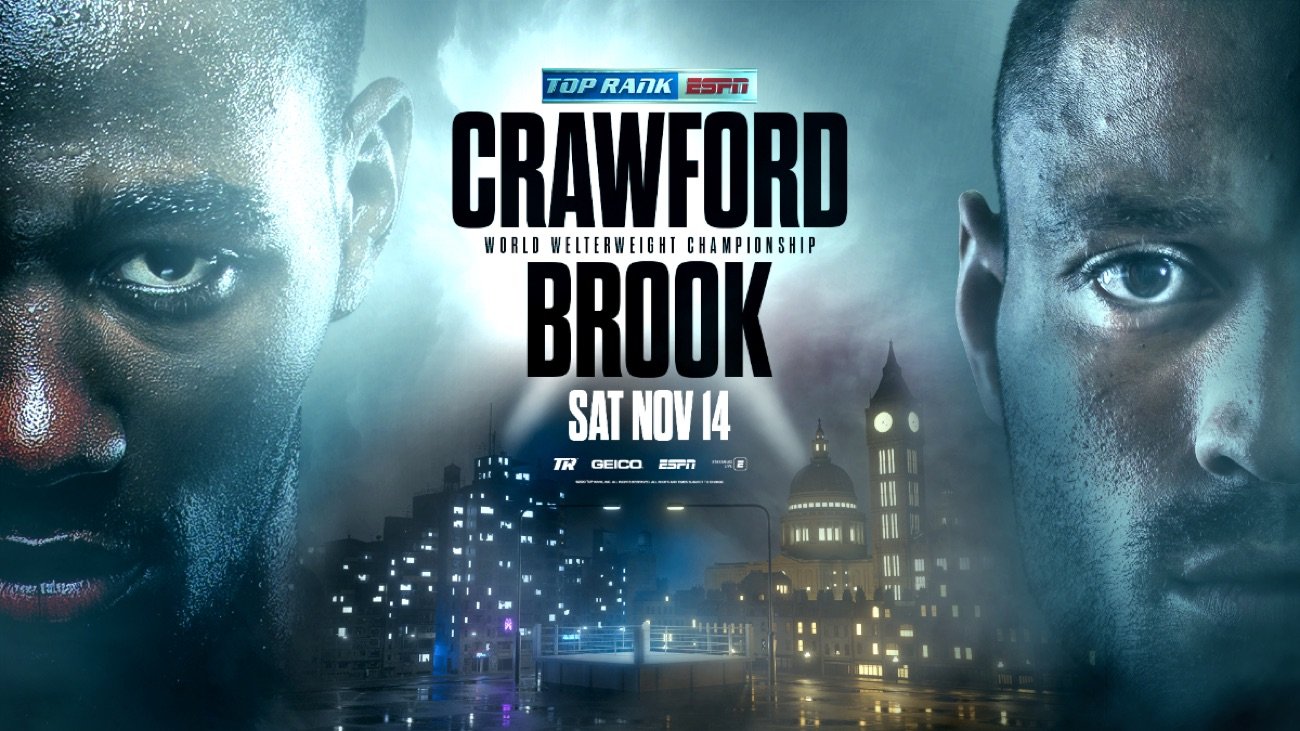 In the world championship co-feature, Joshua “El Profesor” Franco will defend his WBA super flyweight title against former world champion Andrew “The Monster” Moloney in a rematch of their June bout, won by Franco via decision.

Promoted by Top Rank and sponsored by GEICO, ESPN and ESPN Deportes will televise Crawford-Brook and Franco-Moloney 2 beginning at 10 p.m. ET/7 p.m. PT, while a full slate of undercard bouts will stream live on ESPN+ at 7:30 p.m. ET/4:30 p.m. PT.

Venue information for Crawford-Brook will be announced soon.

“Kell Brook is one of the elite fighters in the world. He has faced so many of the top boxers,” said Top Rank chairman Bob Arum. “He is a real test for pound-for-pound great Terence Crawford. This is another premium fight that will be available to boxing fans for no extra charge live on ESPN.”

Brook (39-2, 27 KOs), from Sheffield, England, is a former welterweight world champion who made three successful defenses of the IBF title he won from Shawn Porter in 2014. His only defeat at welterweight came to Errol Spence Jr. in May 2017, a competitive fight that ended in the 11th round after he suffered a broken orbital bone. Since the Spence defeat, “The Special One” has won three bouts at junior middleweight, including February’s seventh-round stoppage over Mark DeLuca. Brook has long campaigned for the Crawford bout, and earlier this year, he ran into Crawford at the Deontay Wilder-Tyson Fury II weigh-in.

Brook said, “I would just like to say a big thank you to Bob Arum and his team at Top Rank and to Baz Kandiara and my management team for getting the ﬁght made. Thank you also to Terence Crawford and his team. It’s a fantastic ﬁght, a proper ﬁght for the fans to get excited about. I’m sure it’s one that will have viewers on the edge of their seats, whichever side of the pond they’re from.

“I’ve been told there are people writing off my chances, questioning my age, and my ability to make the weight. Well, let them talk. Some people focus on reading headlines, I focus on making headlines. Those people writing me off as a big underdog? No problem. I guess this big dog will be making a few people richer during a difficult time.

“Terence isn’t too much younger than me. They know that I’ve never ducked a challenge, and they should know that I’ve never failed to make 147 on the scales. With age comes experience. My knowledge and experience make me a diﬀerent ﬁghter, a more mature ﬁghter. Couple that with a happy fighter, and you’ve got yourself a dangerous fighter.”

Moloney (21-1, 14 KOs), from Melbourne, Australia, won the interim world title with a knockout over Elton Dharry last November and was subsequently elevated to world champion. In his first world title defense, June 23 from the MGM Grand Las Vegas Bubble, he was upset via unanimous decision at the hands of Franco (17-1-2, 8 KOs), a native of San Antonio, Texas, who was previously best known for his action-packed trilogy with Oscar Negrete.

Said Moloney, “I am extremely excited and motivated for my rematch with Franco. I’m very grateful that Top Rank has given me the opportunity to get my revenge and reclaim my world title. I have been working extremely hard every day to make sure that world title is strapped back around my waist on Nov. 14.”