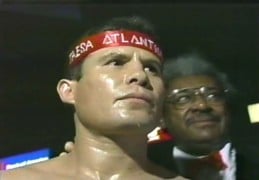 The great Julio Cesar Chavez was never once robbed in a fight in Mexico, no judges would have dared do such a thing to the greatest fighter ever to have come out of Mexico. Yet Chavez was the victim of a mugging yesterday in Mexico City. The living legend, now aged 57 yet still a man no mere mortal would dare to tackle in a fair fight, has reported on his twitter page how two armed motorcycle riders put a gun to his head and took his watch and chain.

Chavez says his son Jorge also had his watch taken:

“I’ve just been the victim of a robbery, putting a gun to my head, taking my watch and chain and from Jorge his watch,” Chavez wrote on social media. “There is no doubt that life can be lost in a second. We have to weep about the danger in Mexico City and beware of the motorcycles that go around it. I want to clarify that not all motorcyclists are criminals, but it’s important to be aware of the motorcycles on which there are two people riding because most of the time they are the ones who assault people. There are good people in Mexico.”

It makes one wonder if these two shameless thugs actually knew who they were robbing, as God-like and revered as Chavez truly in his his homeland. Thank goodness we are not today reading about the death of another fighter, in this, a week that has been as rough as can be imagined for our great sport – with the tragic deaths of Maxim Dadashev and Hugo Santillan. And before those two sad losses, fans were stunned to hear of the untimely passing of former Chavez ring rival, the sublime Pernell Whitaker.

Chavez, the king of kings when it comes to boxing in Mexico, is thankfully okay, if aggrieved at what happened to him. Chavez is insistent that major steps have to be taken to tackle crime in Mexico.