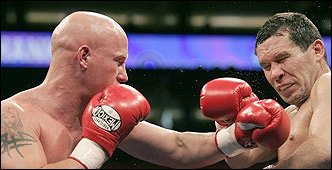 James Grover Wiley is best known for being the final opponent of the great Julio Cesar Chavez – Back in 2005, as a largely unknown fighter, Wiley defeated the ageing Mexican via corner retirement. This win ultimately earned Wiley a fight with Chavez Junior, as well as a few reasonably high-profile bouts against top-ranked fighters – all of which Wiley lost despite giving his best efforts.

Exiting with an average-looking 30-12-1(14) ledger, Wiley today owns a construction company as well as a gym in his hometown of Omaha, Nebraska. Good friends with his “little bro,” Terence Crawford, Wiley also has some storied career to look back on:

Q: First of all, Grover, what was your amateur record?

Grover Wiley: “I was a wrestler first. My boxing record was like 25-2 but I had 20 first-round knockouts. That was my thing, I was a real good puncher. My style was always way more suited to the pro style, so I went pro fast. I fought a lot in Kansas. You remember Tommy Morrison? He was real big then and he was the big white KO puncher and I was the small white KO puncher. I fought on his under-card quite a lot then and they treated me like a king! I fought on the USA network and on ESPN.

“But then, when Tommy got AIDS, the fights slowed up for me – it was like I had AIDS myself (laughs). It was so tough getting fights. It turned into a case of, I’d take fights whenever and wherever I could.”

Q: Did you ever have a full-time promoter behind you?

G.W: “No, I didn’t. And here’s a story for you. Tommy Burnette, he was a promoter who worked with Matt Vanda and some other good guys, and he got with me and he started getting things moving for me. But then he died! I was in an elevator with Tommy, and with Terence Crawford, who was 14 years old at the time, and I was going to have a fight set for Fox Sports (TV) and Tommy had a heart attack right there and he died at my feet. It was terrible. That was also such a tough time for my career.”

Q: You got a big fight with former world champion Greg Haugen in 1999, with you dropping a decision.

G.W: “That was my first ten-rounder. He didn’t win that fight. He dropped me in the second-round but after that my trainer, he told me to catch his right hand with my open glove. After that, the fight just changed. He literally ran from me. I joke how I beat him from pillar to post. But at the very least that fight should have been a split decision, either way. It’s tough getting the win if you have no promoter and you’re fighting a guy who does have one.”

Q: You are of course most well known for your big upset win over the great Julio Cesar Chavez, who you stopped in 2005……

G.W: “Yeah, he’s another one for you. My father passed away two weeks after I graduated college and the last fight we watched together was Chavez against Haugen in Mexico, with the biggest live audience in history. Then, years later, I wound up fighting both guys! Quite amazing really.”

Q: How much notice did you get for the Chavez fight?

G.W: “S**t, I never got notice for a single fight in my life – apart from for that one. And that was the most nervous I ever was for a fight. Man, I was nervous. I’d studied all of his fights, his big wins, and I knew everything about Chavez. I entered that fight with a do-or-die attitude. The first-round, I was nervous and my trainer, who trains Terence Crawford now, he is kind of vocal, and he told me to throw punches or else! I said yes sir! Then I began hitting him with body shots and I knew I was hurting Chavez. I could hear him groaning as my body shots landed. Then, when he quit on his stool (after the end of the fourth-round) the crowd went crazy. He blamed it on a broken hand and, boy, did he wear that cast for the longest time! He wore the cast for about eight months (laughs). But after that fight, all I wanted was a fight with Chavez Junior, at 140 pounds. But he grew, and he was way too big when I did get the fight with him.”

Q: It was all big names for you after the upset win over Chavez.

G.W: “Yeah, it was what I wanted – the limelight. I took any fight, I didn’t care about weight or anything. In hindsight I should have listened to my team, who told me not to fight a guy when he’s so big – like Dmitry Salita and Julio Cesar Garcia, both of whom were massive when I got in the ring with them. I took any fight, thinking there was a good chance I could win. The win over Chavez rejuvenated my career for about a minute and I was on a last big run for the money.

“Garcia was the best fighter I ever faced; at least he hit me the hardest. The day of the fight with Garcia, Terence [Crawford] was with me and he said, ‘man, look at his legs, he’s huge.’ I said, ‘Bud, shut the f**k up, I don’t need to hear that!’ But he was, he was around 180 pounds when he got in the ring with me. And Chavez Junior, yeah he was massive when I fought him. I went in trying to tear his head off, not listening to my corner as I should have been, and he got me with that body shot. We had worked on that so much in the gym [avoiding Chavez’ body shots] yet when the fight came I just didn’t listen or stick to the plan. I just wanted to destroy him.”

Q: You nevertheless hold a unique distinction, being the only man to have fought both Chavez Senior and Junior.

G.W: “Yeah, and I think I’m the only white guy to have stopped Chavez. I know he was way past his best when I fought him, but it was still a big deal. I run a gym here in Nebraska and I have posters of the fight on the wall and people see Chavez and go ‘wow, the great Julio Cesar Chavez!’ And he was, he was great.”

Q: You are good friends with Terence Crawford?

G.W: “Oh, I’ve known him since he was ten years old. He trained at my gym and I used to get him up at 4 A.M to go and do road-work. He’s like my little bro. He was my sparring partner for a number of my fights, including the Chavez Junior fight. He and my son are real close. I tell you, the discipline he has, the fact that he trains all the time, with no love of the limelight – which was the exact opposite with me (laughs) – he will never lose a fight. One time, years ago, a Cuban guy gave me a real going over in the gym and Terence stood up and got in there with the guy and, wow, did he give it to him bad! Terence had my back. I had a 17-year-old bodyguard! (laughs).”