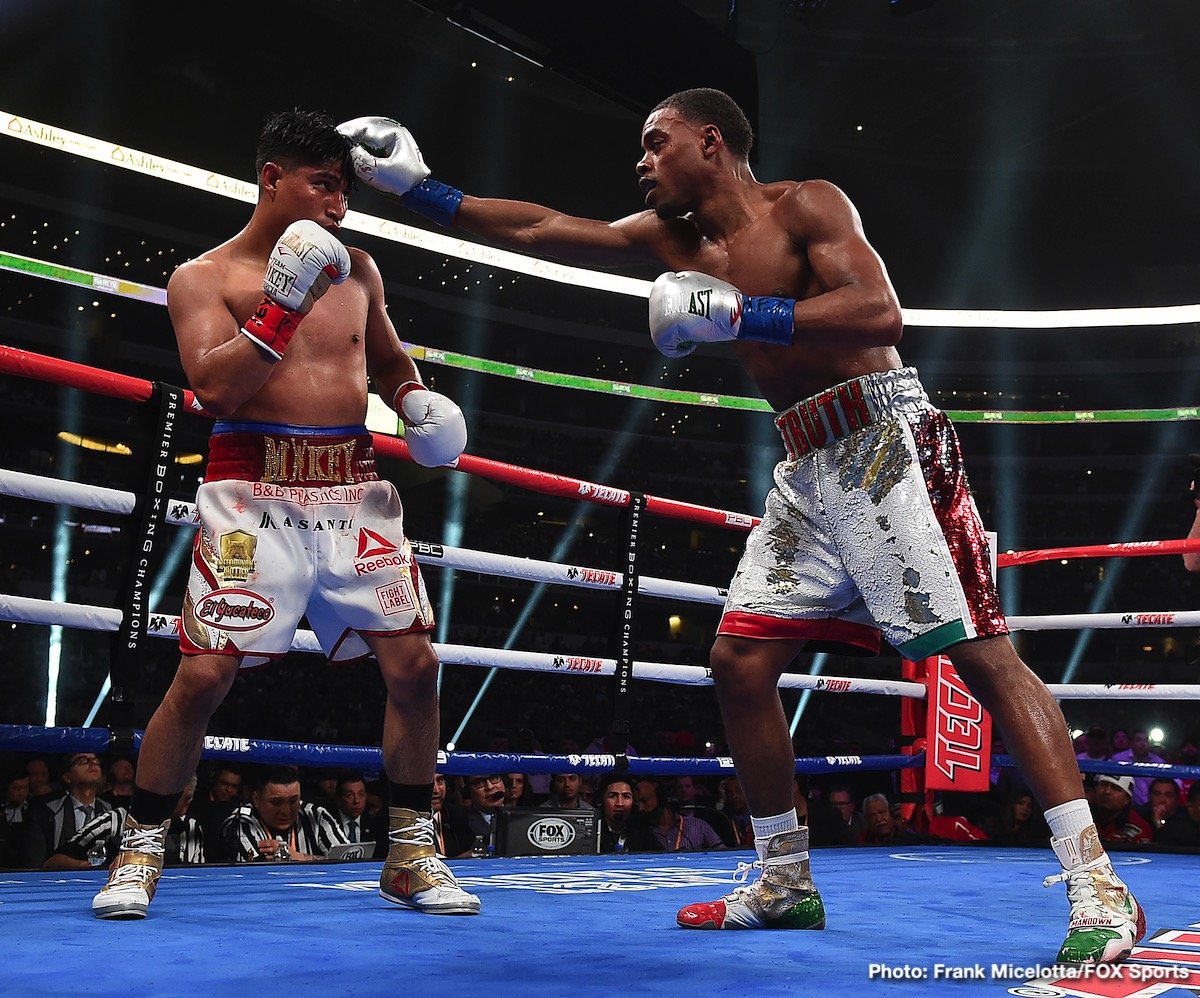 Mikey Garcia insists that his fight with Errol Spence Jr didn’t change him in any way and that he’s still the same person he was before. It’s unclear whether the money that Mikey made in his fight with Spence took away his motivation to keep competing.

The 33-year-old Mikey fought once in 2020, beating fringe welterweight contender Jessie Vargas, but he hasn’t scheduled a fight in 2021.

It’s not looking like Mikey will fight at all this year despite huge interest from Regis Prograis in fighting him.

Given Mikey’s inactivity and his poor showings against Vargas and Spence, Prograis would be a perilous fight for him. That’s not the type of opponent you want to fight if you’re as inactive as Mikey.

Many boxing fans believe that former four-division world champion Mikey (40-1, 30 KOs) has lost his motivation to continue fighting since losing a one-sided 12 round unanimous decision by IBF/WBC welterweight champion Spence Jr in March 2019.

The scores were embarrassingly lopsided, with Spence winning:

Since that loss, Mikey has seemingly been focusing on cars, not fighting and looking overweight.

When asked if his loss to Spence has changed him, Mikey seemed defensive, saying that COVID had many fighters inactive in 2020. Mikey points out that he fought once in 2020 against Jessie Vargas, but fans weren’t impressed enough by that fight for them to remember it.

When fans don’t remember who you last fought, that’s an indication that they weren’t impressed with the level of your fight.

Mikey could have made an impression on the fans if he’d chosen a live body in 2020 like Yordenis Ugas, Jaron Ennis, Vergil Ortiz Jr, Keith Thurman, or Shawn Porter. Unfortunately, all those guys would likely beat Mikey.

“I don’t know. I don’t think so. In what way?” said Mikey Garcia to Fighthype when asked if his fight with Errol Spence Jr ‘changed’ him.

“I don’t think it did. I don’t know in what way. It’s just that people don’t see me on a daily, so they don’t know much about me as much as they think they know.

“Maybe they forgot about the fight with Jessie Vargas [in February 2020], so they feel that my last fight was against Spence.

“So they didn’t find out about the Jessie fight, and so they haven’t heard and haven’t seen me. Last year, COVID happened, and almost every fighter was out the entire year.

“People don’t look into it. It’s very easy for them to open their mouth and comment, but they don’t really do their research and talk and find out the real facts.

Read:  Usyk's Manager Krassyuk: Usyk Is A Real Heavyweight, Not A Cruiser Fighting As A Heavyweight Like Chris Byrd

You can say the Spence fight changed Mikey because some boxing fans believe he’s more into collecting cars than he is in staying busy and maximizing the amount of time he has left in his dwindling career. That’s not good when you’re 33 and you don’t have much time left.

If Mikey wants to take advantage of the little time he has left as an elite-level pro, he should be trying to fight three times a year instead of once or, in the case of 2021, not at all.

“I would love to fight [Josh] Taylor,” said Mikey. “Of course,” Mikey said when asked if he would like to fight Taylor. “When has a fighter said no to a good fight.

“You’ve got to remind people that there’s a business side to it where a promoter looks at the business before the legacy or any of that before the best interest of the fighter.

“You got to look at a bunch of things before you decide if a fight is possible or not.

“Taylor would be a great match-up, but just to remind you, he’s with Top Rank,” said Mikey in making it clear that he’s NOT going to fight the dangerous Taylor.

It sounds like Mikey isn’t too optimistic about getting a fight against Josh Taylor. Mikey could at least try and set up a fight with Taylor instead of sounding so pessimistic.

Some fighters would go all out to try and get a fight with Taylor if they were in Mikey’s shoes, but he doesn’t seem overly ambitious. Was it the Spence fight that did that to Mikey, or is he seemingly lost his motivation due to the money he’s made?