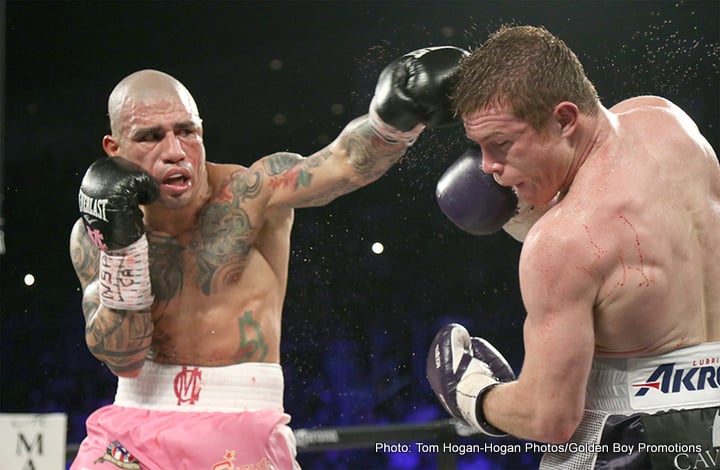 Puerto Rican legend Miguel Cotto, last seen losing his middleweight championship to the younger and bigger Saul “Canelo” Alvarez, is ready to return to action. According to Dan Rafael of ESPN.com, Cotto has a date: June 18th being pencilled in for his next fight, but he has yet to officially name his opponent.

Cotto, who will likely fight once again in New York, has been in talks with fellow future Hall of Famer, Juan Manuel Marquez, and could still face the Mexican great. However, another rumour floating around on a few web sites says it is possible Cotto, 40-5(33) could face thrill-a-minute slugger Ruslan Provodnikov next.

So far, it has not been confirmed what weight 35-year-old Cotto will fight at, but whether it turns out to be Cotto or Provodnikov, a catch-weight fights seems a good bet. Both possibilities are good, solid match-ups, but the idea of a Cotto-Provodnikov really does appeal. How could this one fail to be both exciting and memorable?

Hw much has Cotto got left and how much more does he want to achieve before he is ready to walk away and retire? The only Puerto Rican in history to have won world titles at four different weights, Cotto’s place in the history books is already secure. Maybe Cotto, like so many other great fighters, loves the sport so much he cannot think about walking away. It would be sad to see Cotto go out as a loser, especially to a fighter who would not have been capable of even winning a round against the prime Cotto.

As of now, Cotto remains a top class operator who, in the Canelo fight, proved he is far from a finished fighter. A pro since February of 2001, Cotto has consistently fought the best; either as a super-lightweight, a welterweight, a light-middleweight or as a middleweight. It could be that Cotto continues to face the best for some months to come. And who knows, with his former bitter rival Antonio Margarito set to return to the ring next month, we could even see a third fight between these two one day down the line (however unlikely, you never know for sure!)