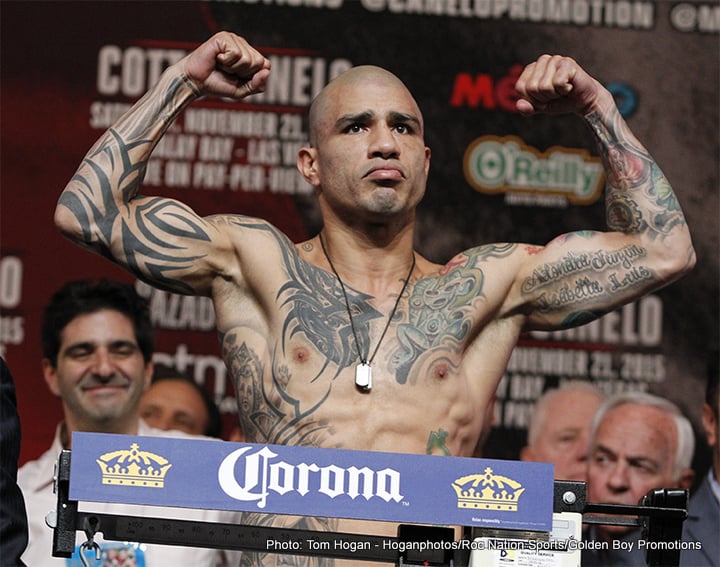 According to a piece on ESPN.com, Miguel Cotto will return to action on February 25, against a fighter who will also be coming back from a substantial layoff. Cotto, who is zeroing in on retirement having pretty much done everything – winning world titles in multiple divisions and engaging in numerous super-fights – is set to face Texan banger James Kirkland.

The fight, which both fighters have agreed to, is scheduled to take place at a facility inside the Dallas Cowboys stadium in Frisco, Texas. The bad news (for those who see anything good about this match-up in the first place) is that the fight will be a pay-per-view offering on HBO. Who knows what we can expect to see in a fight between Cotto, 40-5(33) and last seen losing a competitive fight with Canelo Alvarez 13 months ago, and Kirkland, 32-2(28) and last seen getting crushed by Canelo over a year-and-a-half ago.

Cotto is now 36, southpaw Kirkland is 32 yet he has endured seriously long layoffs throughout his career. Okay, Kirkland can punch, but will he be able to hit the far more accomplished, more skilled Cotto, even once? Kirkland is likely to do the smart thing and reunite with trainer Ann Wolfe (who was absent from Kirkland’s corner for the quite disastrous fight with Canelo, where Kirkland was blasted to defeat in three rounds) but can even this help him against the Puerto Rican legend?

Who knows, maybe we critics of this fight will get a pleasant surprise, with Cotto having faded sufficiently to allow Kirkland to drag him into a brawl whereby the action will be exciting. Still, that scenario seems doubtful. How many fans will be willing to part with pay-per-view cash to watch this one?

Cotto Promotions’ Bryan Perez admitted to ESPN.com that he would have preferred to have seen Cotto in a better fight next February.

“We tried to do other fights, but you know how the business is,” Perez said. “Kirkland was there, he was willing to fight Miguel, he makes good fights, and we made the fight. Miguel will do his best to give a great show and an exciting fight.”

That said, fans are sure to say how there must have been better, more credible opponents that could have been matched with Cotto instead of Kirkland; Britain’s Kell Brook for one.