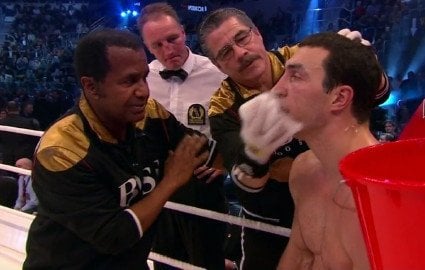 by Izyaslav “Slava” Koza: I met Emanuel Steward face to face on three different occasions. The first time was to schedule a video interview shortly after I conducted one with Wladimir Klitschko before his unification bout against Sultan Ibragimov. At his request and as a great honor to me, the second time, and when the video was recorded, was at his bungalow at a resort where part of the training camp for that fight took place. Too busy with both the upcoming bout preparations as well as an upcoming HBO telecast Emanuel still spent the better part of an hour answering all sorts of fantasy boxing questions an interviewer/fan like myself could make up.

The interviews could be found at my YouTube channel under www.youtube.com/novirasputin2
After the interview, and despite the above mentioned schedule Emanuel spent another hour discussing more boxing, life, politics, and everything else in general. As a final imprint on the impression he would forever make on me the man took out a Kronk Gym T-shirt and handed it over as reminder of our interaction.

I treasure that gift to this day.

The third time I would meet Emanuel face to face was a few months later when, while living in Florida, I acted as a translator for Emanuel and the family of a Russian fighter looking to start a pro career in the US. Though the fighter in question chose a different path, I still remember at some point towards the end of the meeting Andy Lee being present and thinking on how during our previous encounters Emanuel explained the commitment Lee made to try and achieve the ultimate any fighter can in this sport. Emanuel talked about all the sacrifices Lee made, in coming to live and train with him, and all i could think of were the ones that Emanuel must have made as well taking Lee into his home and becoming not just a trainer but the sort of mentor, and dare I say father figure a fighter looks for, and needs, to have a shot at achieving glory.

Later I remember watching Lee get knocked out against Brian Vera on Friday Night Fights, and shrugging that, “he still has Manny.”

It wasn’t that Lee was a legend, or an elite perhaps, but Steward made his commitment and the rest was just not too relevant.

The loss to Vera was avenged three years later.

How many people thought Wladimir Klitschko was a goner after he evaporated against Lamon Brewster in the first fight?

As a “hired gun” Steward didn’t have to stick around. Chalk it up to another bad fighter being exposed.

Yet, Manny stuck to his “hired” guns and left Klitschko exactly where he envisioned the younger of the two Ukrainians would be: sitting on top of the world.

I spoke to Emanuel a few times after our last meeting, though mainly to get quotes for articles I was working on regarding other fighters and the world of boxing, and he was always willing to provide the words I needed. When I stopped writing about boxing there were many phone numbers I deleted from my cellphone. Emanuel’s wasn’t one of them. As I read the news today I took out my old LG flipphone out and scrolled through the phone book. Angelo Dundee, Bob Arum, Shannon Briggs, and Manny Steward were all that was left.

I don’t write about boxing anymore but I felt obligated to give Emanuel his due.