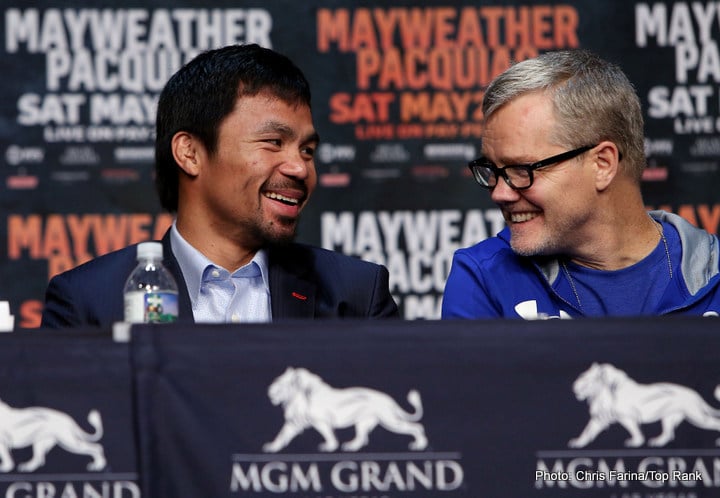 This Saturday night Floyd Mayweather meets Manny Pacquiao in a legacy fight for the ages. Only a select number of privileged people will take in the fight live from the MGM Grand Garden Arena in Las Vegas, broadcasted by both Showtime and HBO on PPV for 100 smack-a-roos including HD. With an estimated 100,000 fans heading for Sin City the stakes are as high as they come for both of these 1st-ballot Hall of Famers. Can Pacman apply the type of pressure that’s needed in order to breakdown Floyd’s defensive wall? Or will Money Mayweather add another notch to his resume that will probably be more respect as time passes?

Instead of hashing out all of the details that got us to this place lets jump right into the deep-end. When the boxer vs. puncher style-clash is presented to the boxing public at an elite level it generally creates a debate. If truth be told it’s one of the oldest arguments on the books and the back and forth never truly goes away.

To this day the outcomes for Leonard vs. Hagler, De La Hoya vs. Trinidad, and the more recent example Provodnikov vs. Algieri, remain debatable. Which fighter landed the bigger punches and who was able to avoid more punches. One side will point out swelling on a fighter’s eye or punch stats, while the other only remembers the early action or knockdown in the first few rounds.

If this weekend’s super fight is a tit-for-tat affair with no clear winner, you can bet your a$$ that #boxingheads all across the world will be heated to no end. And for monetary reasons one can assume a close fight favors a draw to ensure another monster payday for all parties involved later this year. If you need more proof the odds for a draw opened at around 22-1 and now have dropped near 8-1.

From the Pacquiao perspective he faces another opponent with a “0” in the loss column, his third in a row having defeated previously unbeaten Timothy Bradley and Chris Algieri. He will also be challenged by facing a counterpuncher. The Mexican legend Juan Manuel Marquez has been a thorn in Manny Pacquiao’s side in all four fights regardless of the outcomes.

Many fans and experts alike believe Floyd Mayweather will simply pick back-up were “Dinamita” left Manny in late 2012. Mayweather will enter the ring with a squeaky clean record (in the ring) and the more complete fighter from a technical aspect. Floyd will also enjoy a sizable reach advantage which will be nothing new for Manny. Reach will only be a factor if Manny can’t break the barrier inside in order to land his right hook and that trademark missile of a left hand.

Ultimately, this contest will be decided by which fighter is able to impose their pace. For Manny it will need to come via constant pressure featuring feints and footwork. Mayweather has never faced an opponent that posses both elite level hand and foot speed. If Manny can get in and out quickly while scoring blows it could put Mayweather in a hole.

If that’s the case the world will be waiting to see if Floyd can climb out of that hole and be forced to increase his work rate which in theory would favor Pacquiao’s style as the fighter’s exchange. A key for Manny will be to duplicate Shane Mosley’s second round against Mayweather when he caught Floyd not once but twice by punching at the same time as Mayweather. If Shane buckled and hurt Floyd what would Pacquiao do in a similar situation?

Manny is on his “A” game when using different angles to land his Sunday punch. Yes, Marquez had a field day at times in his four separate meetings with Pacquiao and put the icing on the cake by way of right hand counter that sent Manny into outer-space. But he also had to walk-thru hell in the form of 5 knockdowns and received a ton of punishment in the process. The problem for Manny, Mayweather like JMM, is a top-level counterpuncher with more speed, longer reach, and a one of the best defenses of all-time.
So what gives you say? Well something or somebody has to give so-to-speak and this scribe thinks this fight will give casual & non-boxing fans something to talk about at the water cooler come Monday morning.

Two damn-near guarantees that we should expect right off the bat will be Manny on the attack and Floyd employing his underused jab as a rangefinder. Will Manny move his upper body enough on the way inside to avoid Mayweather’s accurate punching? Or will Floyd’s stick frustrate the Pacman from the start? It could be a cat and mouse scenario that more than likely will see Pacquiao getting out of the blocks first due to a busier start in the eyes of the judges.

If Manny can start quickly by putting a few rounds in the bank it will help set up a showdown as Floyd attempts to work his way back in the fight. We can talk about style-matchup all we want but there could be a scenario where Floyd struggles to time Manny or doesn’t work enough to win the rounds.

Smart but explosive pressure will be a must for Manny to win. A knockdown or hurting Mayweather within the first four rounds could go a long way towards victory as well. As the fight enters the midway point Manny better hope he is up on the scorecards. If not it could be downhill at that point. There’s a reason why they say once a counter puncher figures out his opponent it’s usually a wrap.

Floyd will have to be very wary of Manny especially in the beginning as both fighters warm-up. In this fight Floyd can’t spend long stretches on the ropes behind his absolutely brilliant shoulder-roll defense. Lack of activity alone combined with defensive posturing could hurt Floyd by nights-end. Southpaws have caused early drama in a few of Floyd’s bouts but none of them had Pacquiao’s endurance, heart, and speed so I do expect to see some touch and go moments as Floyd attempts to measure Manny.

Mayweather’s foot speed will have to be on display along with overall movement as Manny bounces on his toes with sudden flashes of combination punching. If Floyd manages to stay upright or at least is able to recover from a good shot it could be a tale of two halves to this all-important legacy fight. Look for Floyd to use his jab early and often landing it to the Manny’s head, chest, and stomach.

Another telling story to this fight will be the power hands of each fighter. If Manny can land his duck-under left hand, deadly when executed properly, it will no doubt be the most important punch for him to land a few times a round. Floyd loves timing fighters with a lead right hand. If he lands it along with the left hook he will slowly but surely begin to push Pacquiao backwards.

The last part of the fight I see Floyd taking over the action with crisp post-shots and from time to time 2or 3 punch combos. An issue that could affect Floyd majorly is his brittle hands that have plagued him from time to time throughout his career. A one-handed Mayweather will make it that much harder to keep pace with the busier Pacquiao. That said Floyd has dealt with hand injuries for quite some time and is fully capable of winning with a damage knuckle.

This fight will begin with Pacman getting off to a better start only to see his lead shrink as Floyd uses his master skills to contain and control Manny clearly enough to cement his legacy in boxing. Manny will get his of course but Floyd will be too versatile on both sides.