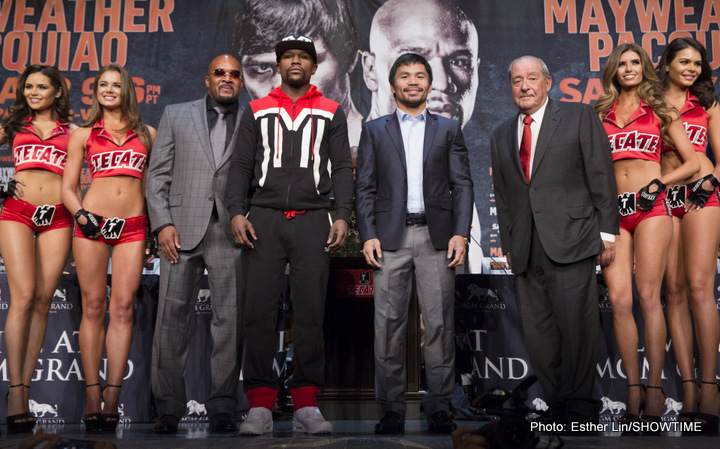 Good day class, today we are going to test your knowledge of, and dispel a few rumors about, the most highly anticipated fight since Jesus and Satan battled it out for dominion over the earth. By now you have been inundated with more than enough analysis of this fight from newbies and experts alike, so lets see what you have learned by taking the official True or False exam of the fight of the century. In order to save you any test related anxiety, the answers to all questions will be provided.

False – If you don’t believe me, check the Vegas line. Mayweather is a 2 to 1 favorite, and that is even with all the emotionally driven money that has been placed on a Pacquiao victory. Few if any established fight analysts are predicting a win for Manny. Does this mean a Mayweather win is a lock? Of course not, but Mayweather is the solid favorite to win this fight.

False – While it is true that Manny is a star in his own right, and against any other fighter he would be the “A” side, he isn’t fighting any other fighter. He is fighting the face of boxing, the highest paid athlete in the sport, and he is taking a decidedly smaller piece of the overall action at 40%. Mayweather and company have control in this fight; they have chosen the venue, they serve as the lead promotor and have made sure that they have all the intangible advantages going into Saturday night. Mayweather is clearly the “A” side.

3) True or False: The undercard in this fight doesn’t matter.

True – I usually don’t agree with Bob Arum on this one, but in this particular case there is only one fight that matters come Saturday night. Once the decision in the main event is rendered, only the die hard fight fans are going to remember that there were fights on the undercard, and even then only remotely so. We have been waiting for what seems like an eternity for this fight, and no matter how good the undercards may be, they are just going to serve as a way to kill time until the main event.

4) True or False: It is important for the sport that the fight be a good one.

False, or at least mostly false – While it would be nice if this was a closely contested fight, the truth is that the two fighters are such compelling and polarizing figures that the very fact that they are in the ring together is going to be enough to provide all the tension and drama required. Once the winner is announced, whether it is a dull decision or a dramatic knockout, the elation of the fans of the victor and the devastation of the fans of the fans of the looser will be all that matters.

5) True or False: This fight will bring new fans to boxing.

False – I am sorry to say it, but this fight is a one and done for most casual fans. When pundits say that this fight transcends the sport, they mean it literally. The boxing aspect of this contest is really secondary. For most viewers this fight will be like the superbowl, it’s more about the event than the actual contest. You know the way your girlfriend is all of a sudden interested in the superbowl when she hasn’t watched a single football game all season? Or how there are people rooting for one team or the other in the superbowl when they couldn’t have cared less about either team the rest of the year? This is just like that. For one night everyone in the world will be a boxing fan, and then the next day they will go on with their lives, except for perhaps some water cooler talk about the event on Monday. The truth is the Premier Boxing Champions series on network TV is more likely to bring new fans to the sport than this event is.

So there you have it, you have successfully completed the exam. Don’t worry, the results of this test will not count towards your final grade. You may argue that these questions have little to do with the fight itself, and you may be right. However, like any other any other contest that extends beyond the boundaries of the sport, the events outside the ring have grown to overshadow the events within. At least until Saturday night, when the truly important questions will finally be answered.