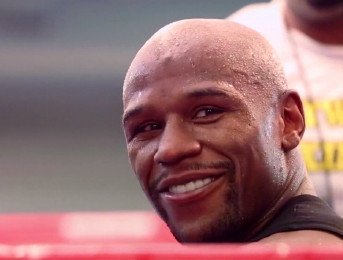 Floyd Mayweather Jr. appears to be in no hurry whatsoever to make an announcement for who he’ll be facing on May 3rd in Las Vegas, Nevada. Mayweather took the trouble to have a web poll created on his Mayweather Promotions site that purported to pick his next opponent. When Khan easily won the vote 57 percent to 43 percent over Marcos Maidana, it was widely assumed that Mayweather would make an announcement on Monday that the 27-year-old Khan would be his next opponent, but that’s not happened.

Here it is Tuesday, and Mayweather isn’t saying a word about who will be facing him in his next fight, even though he will need as much time as possible to try and drum up interest in his next fight if it is Khan that he’s facing. That’s a very unpopular choice for Mayweather, and he’s picked the wrong date for him to be fighting Khan by selecting the Cinco de Mayo holiday weekend. Mayweather fighting a Pakistani/British fighter on a Mexican holiday is likely going to result in fans saving their money and spending it on other things rather than watching Mayweather beat up on a fighter who is really no longer relevant in the light welterweight division.

For Khan’s sake, he had better hope that Mayweather is merely waiting out the news on the Manny Pacquiao vs. Tim Bradley II rematch to find the perfect time to reveal to the public that Khan will be the guy. If Mayweather is starting to have second thoughts about his brilliant idea to let fans with twitter and facebook accounts choose his next opponent rather than opening up the vote for all fans, then Khan could be left behind in favor or the smarter choice Maidana. It’s the smarter choice to select Maidana because of the holiday that Mayweather is fighting on; not that Maidana is Mexican. He’s from Argentina, but he’s well liked by Mexican fans, and he’s someone that is guaranteed pretty much to be there for 12 rounds with Mayweather. He’s not going to fold the firs time he gets hit with a hard counter shot by Mayweather the way that Khan likely will.