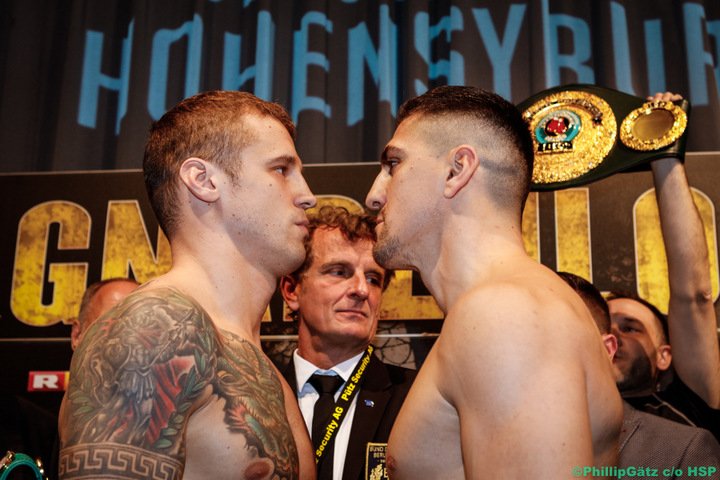 Former 200-pound limit champion Marco Huck meets the new kid on the block Mairis Briedis, for a WBC cruiserweight title fight. The fight being upgraded due to Tony Bellew’s absents is a nice boost for the fighters. More importantly, Huck’s career is on the line against what some have branded one of the next generation cruisers.

Clearly, the Captain is trapped in the corner and I for one can’t wait to see how he reacts to a young buck attempting a hostile takeover. Captain Huck earned a reputation as a hard-nosed, exciting offensive fighter who shares a tie for the most cruiserweight WBO title defenses. Marco will be engaging in his 18th title bout a feat only he’s accomplished at cruiserweight.

What does Marco Huck have left in the tank is the biggest question in the boxing world surrounding this matchup. Earlier in Huck’s career Steve Cunningham stopped the Serbian in the 12th round. Huck followed that loss up with 20 consecutive cruiserweight fights without taking an ‘L’. His only blemish at the weight was a draw that he more then made good on against Ola Ofolabi. His only loss in that 8 year stretch came via debatable majority-decision to Alexander Povetkin at heavyweight.

That impressive string of victories at the 200-pound limit came crashing down for Huck from a boxer somewhat similar to Briedis. Krzysztof Glowacki was an unknown commodity with a shiny unbeaten record as well. Huck was ahead on the scorecards, even scoring a sixth round knock down that seemed to hurt the polish native. But Krzysztof wouldn’t be denied, able to pick himself off the canvas and storm back to finish off Huck in spectacular fashion.

Mairis Briedis journey to this WBC title fight is littered with non-de script fighters so it’s hard to judge beyond the eye test. Briedis’s jab is definitely a weapon when he chooses to throw it with authority rather than just touch opponents with it. He likes to follow the lead jab with right hands and works the body fairly well.

Although Briedis is an outside fighter, his defense won’t blow you away. He can also be a little upright and stiff in his stance. Manuel Charr at the heavyweight division is far and away Briedis best victory in an otherwise hollow 21-0 resume. Mairis comes into this major opportunity riding a streak of 7 knockout’s in a row can he make it 8?

Let’s not forget that Glowacki walked thru hell in order to come from behind and knockout Huck in the 11th. Briedis looks the part of a puncher but will his endurance and stamina be as strong in the late rounds? Huck’s work rate and combination punching may be his best defense because it will make Briedis have to reset offensively.

This scribe is banking on the experience being the main difference maker even with Huck being a slight underdog on the books. Whatever the outcome, one thing can almost be guaranteed is a fan-friendly fight in this under-appreciated cruiserweight division.

My official prediction is Marco Huck by majority decision.

Side Note: On Saturday night in the main event of Golden Boy Promotions second broadcast of their new ESPN2 series Antonio Orozco faces Keandre Gibson. On Tuesday the PBC on FS1 returns with a crossroads bout between hardened vet Edner Cherry and once beaten Omar Douglas.