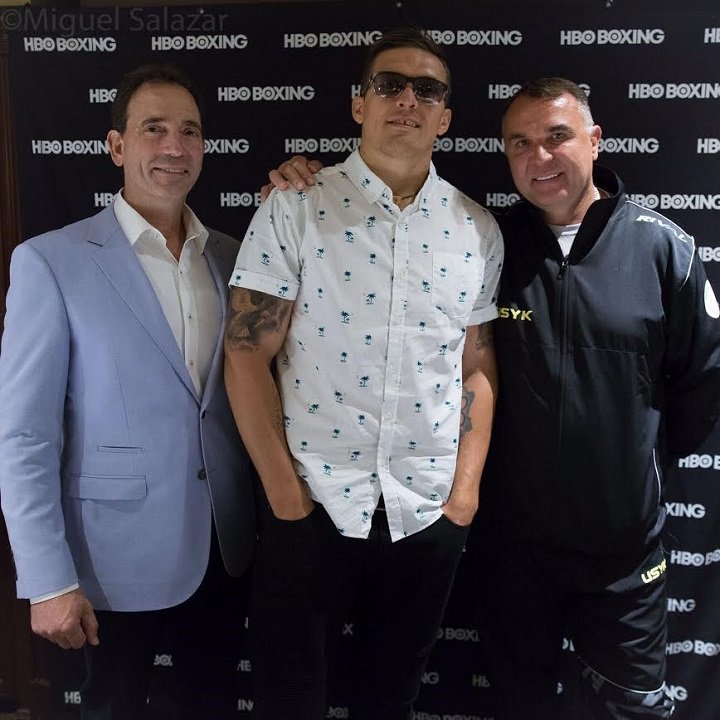 “I love California, the weather is fantastic, it’s much easier to train here and
I will continue to train here for my fights. It’s very cold in the Ukraine right now,
this is much better.”

“Yes, it’s a sacrifice to be away from my wife and three small children to train here, but this is my job and they are understanding of that.”

“Running by the ocean and training in the warm weather is much better for me.”

“The biggest motivation for me is my desire to be the best, I give 100% everyday
in the gym, I know that I need to continue to improve to become the undisputed cruiserweight world champion.”

“I’m very happy to be on HBO and showcase my talents. Fighting in the United States and on HBO is something I have wanted to do since I turned professional in Ukraine.”

“I’m working hard in camp with my new trainer Russ Amber, we’ve made some small changes and you’ll see some of them on April 8.”

“There are plenty of champions I would like to fight in the division, but I’m only thinking about Michael Hunter right now.”

“I’ve watched Michael Hunter’s last couple of professional fights and saw him fighting in the 2012 Olympics so I’m very familiar with him.”

“I want to have all four cruiserweight titles in the future, any of the other titles holders I’m willing to face.”

TOM LOEFFLER
“Thanks to HBO for showcasing the cruiserweight division, it’s always been an extremely talented division. Now with Aleksandr, Tony Bellew, Murat Gassiev and with Marco Huck fighting again this weekend, it’s an extremely deep division, one that with the right matchups that Aleksandr can emerge as the next superstar.”

“We want to give Peter Nelson a lot of credit for having the foresight to add Usyk to the show at the Forum in December for his HBO debut and to this upcoming card on April 8th card against Michael Hunter.”

“This has been a big commitment for Aleksandr to bring his training camp to the U.S.
He sees the opportunities in the United States that he can build on for his career by training here and fighting in this country.”

“Also have to acknowledge Alexander Krassyuk of K2 Promotions Ukraine for building up Aleksandr in the Ukraine and getting him the mandatory world title fight against Glowacki in only his tenth professional fight.”

“Aleksandr beat Glowacki for the world title and that opened the door to make the pitch to HBO.”

“Michael Hunter was approved by HBO and most importantly agreed to fight Aleksandr.
There was no hesitation on Aleksandr’s part on taking the fight.”

EGIS KLIMAS
‘Preparations have gone very well for Aleksandr for this fight. Great to have the Ukrainian Dream Team on this card.”

‘Thanks very much to the media for this great turnout.”

“This is Aleksandr’s job and he understands the sacrifices he has to make for his training camp to be here in the U.S.”

“Aleksandr is training with Russ Amber, other reports were incorrect about his new trainer.”

Winner of the Gold Medal at the 2012 London Olympic Games for Ukraine, Usyk became the fastest cruiserweight world champion on September, 17, 2016, defeating Krzysztof Glowacki in Gdansk, Poland in only his tenth professional bout. The victory bested boxing legend Evander Holyfield’s record who had performed the feat in his twelfth professional fight.

Most recently, Usyk made his highly anticipated United States and HBO debut, defending his title for the first time in dominant fashion, stopping world ranked Thabiso Mchunu in the ninth round on December 17, 2016 at The Fabulous Forum in Los Angeles and live on HBO World Championship Boxing.

Representing the United States at the 2012 Olympic Games, Hunter returns to battle following his career best victory, a ten round decision over then undefeated Isiah Thomas on May 13, 2016 in Las Vegas.

World ranked #8 by the WBO, Hunter is the son of former heavyweight contender Mike Hunter who serves as his trainer in the pro ranks.