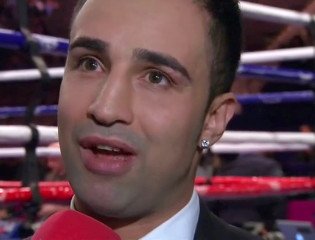 Paulie Malignaggi (33-6, 7 KOs) hasn’t fought in nearly a year since being blown out badly by Shawn Porter last year in April, but it now looks like Malignaggi may be starting to show interest in returning to the ring. Malignaggi is saying that a fight against IBF welterweight champion Kell Brook (33-0, 22 KOs) is one that would be interested in.

Brook doesn’t have an opponent for his next fight in early 2015, and it’s quite possible he might be interested in someone like Malignaggi. Brook’s promoter Eddie Hearn needs someone who is good but obviously not that good because Brook is fighting or the first time since suffering a thigh wound in a knife attack.

Malignaggi would be a better option than many of the top 15 contenders if Hearn is looking for a fighter that will interest the boxing public, and give Brook some rounds.

Hearn wants someone who the American boxing public are familiar with, and Malignaggi fits the bill in that department. He’s not ranked in the top 15, but that’s not something that will keep the fight from getting made if Hearn and Brook wants it.

If Brook really wanted to impress the American boxing public he’d look to defend his IBF title against someone like Keith Thurman, Marcos Maidana or Robert Guerrero, but it’s not up to Brook in who he faces. His promoter Hearn is the one who makes the fights for him, and he doesn’t appear to be looking to match Brook tough for his first defense of his IBF title.