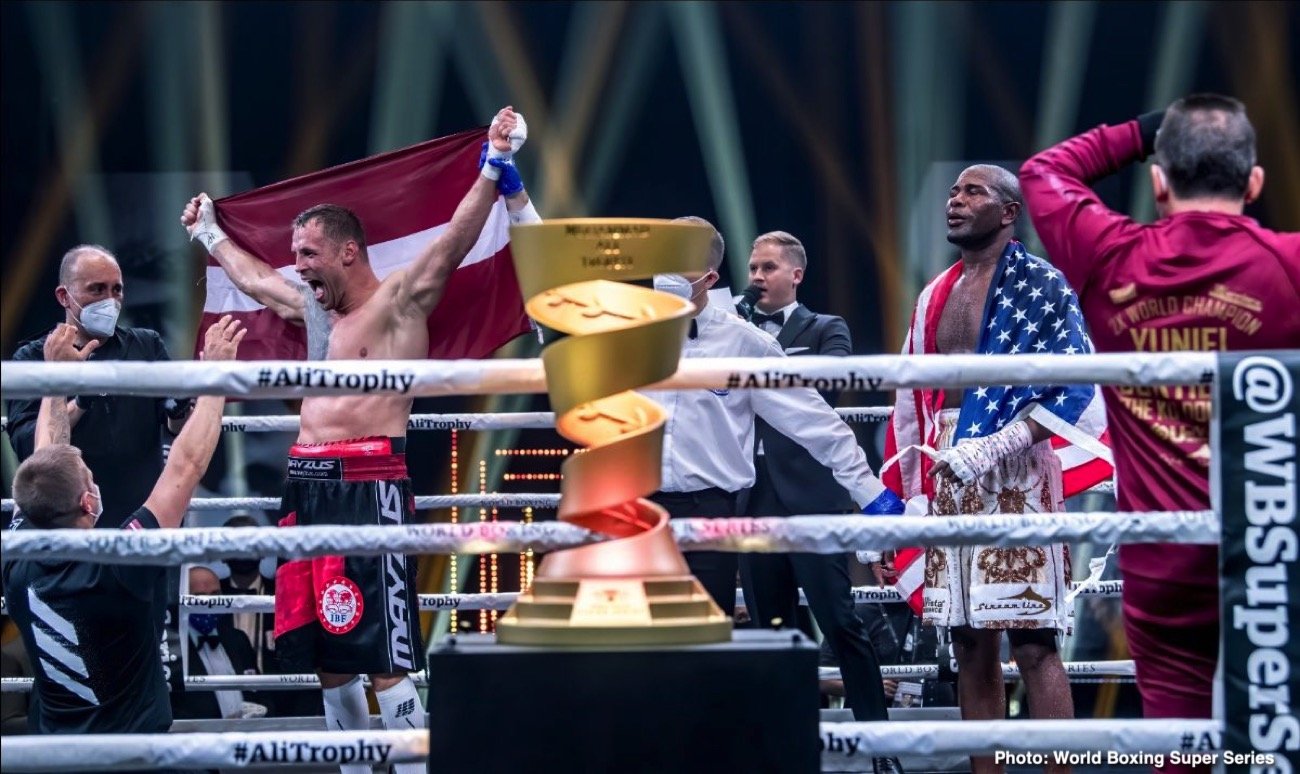 Fresh off his brilliant and well deserved win over Yunier Dorticos at the weekend, a victory that saw Mairis Briedis capture The Muhammad Ali Trophy in winning the second edition of The World Boxing Super Series: The Cruiserweights, the 35 year old is thinking big. As in heavyweight division big. After returning home to Latvia a genuine hero, Briedis, 27-1(19) told the media how he is thinking about trying his hands as a heavyweight.

If Briedis does move north a few pounds, he will be joining the likes of Oleksandr Usyk (the only man to have beaten Briedis), David Haye, Marco Huck and the greatest cruiserweight ever to have done it, Evander Holyfield, in his quest to reign supreme in the sport’s premiere weight division. But can Briedis do it?

The skilled, experienced and seriously tough Briedis seems to have all the tools – speed, decent power, chin, stamina, heart – apart from maybe height and reach. And of course we don’t know how the adding on of something like 20 pounds will suit the 6′ 1″ Briedis. In this age of huge heavyweights, monsters indeed, it’s a very hard thing for even the special cruiserweights to be able to mix it in the land of the giants. We await with great interest Usyk’s fight with heavyweight tank Dereck Chisora, this being a match-up that will see Usyk match his skills with the sheer physical strength that belongs to the teak-tough Brit.

If Usyk is a winner on October 31, maybe Briedis will take that as a signal that he too can and should make the move up. If, however, Chisora gives Usyk a rude awakening, maybe Briedis will have second thoughts. It is the biggest leap in all of boxing, or at least it can be – going from 200 pounds to unlimited; with the cruiserweight in question possibly having to face a man who weighs anything from 240 to 260 pounds. Is Briedis capable of beating the likes of Anthony Joshua, Tyson Fury, or even the “small” heavyweights?

As good as he is, maybe even as great as he is, the addition of Briedis to the current heavyweight ranks would equal interest and potential excitement. At age 35, having accomplished all he has accomplished as a cruiserweight, it might be that this born fighter needs a new goal, a new challenge.

Conquering the heavyweight division, or even a portion of it, would certainly give Briedis that goal/challenge. Just imagine an Usyk-Breidis II, at heavyweight.