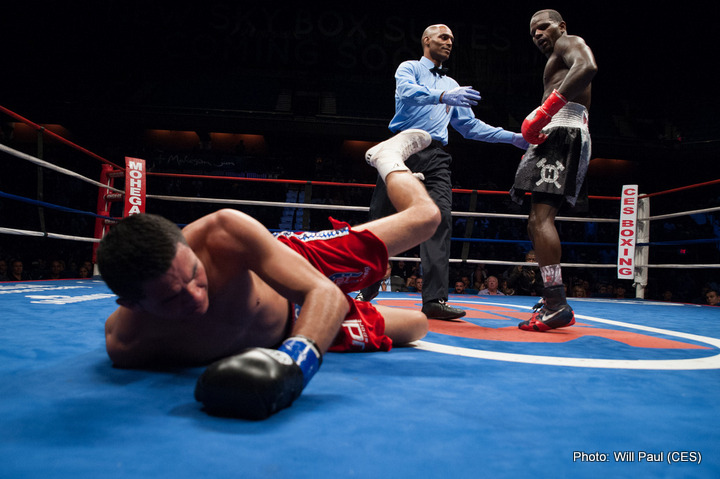 When it came time for undefeated junior welterweight world champion Terence Crawford to find a suitable opponent for his first title defense of 2016, only one of the so-called top 140-pounders in the world answered the challenge.

“I’m running with a dream,” said Lundy, ranked No. 8 in the world. “This is what I’ve been fighting for my whole career.

“I’m telling Crawford: ‘You’re coming to the east coast. You’re coming into my backyard. I’m coming here to knock you out. I’m going to give you everything you’re looking for.'”

Ten years since his debut, Lundy (26-5-1, 13 KOs) has finally reached the pinnacle of his profession, a well-deserved opportunity for a fighter who’s always been willing to fight anyone, anywhere at any given time, traveling from Quebec to the Ukraine to earn his respect in a sport where such persistence and dedication sometimes goes unrewarded.

“We’ve waited for this opportunity for a long time. No one deserves this more than Hank,” said CES Boxing president Jimmy Burchfield Sr. “We’ve fought everywhere. We’ve taken last-minute fights overseas. We’ve been the underdog. No one works harder than Hank and no one is hungrier for a shot at a world title. On Feb. 27th the whole world will see why he is the best 140-pounder in the world.”

According to Crawford’s promoter, Top Rank founder and CEO Bob Arum, no one else would step to the plate against Crawford, not even Mauricio Herrera, who beat Lundy in July in a controversial technical decision; reigning World Boxing Council (WBC) champion Viktor Postol, whom Lundy faced in 2013; or former champ Ruslan Provodnikov.

“That’s what I tell you about these fighters. They want to pick and choose,” Lundy said. “One thing I tell you about me and in my career, you never see ‘Hammerin” Hank pick and choose. I don’t care who I’m in the ring with. I’m an old-school, throwback fighter. You put them in front of me, let’s get it. I don’t have time for picking and choosing. The opportunity came for a world title and I’m ready. I’ve been ready.”

Facing Crawford (27-0, 19 KOs) is a unique challenge, but not the first time Lundy has stood toe-to-toe with an unbeaten vet. A 5-foot-8 right-hander from Omaha, Neb., Crawford rose to prominence in 2013 with a dominant, unanimous decision win over Breidis Prescott, followed by back-to-back wins over former WBC Silver Lightweight champ Alejandro Sanabria and unbeaten Russian Andrey Klimov before earning his shot at 140-pound title-holder Ricky Burns in 2014.

Crawford has defended his WBO title four times since beating Burns, including wins over contenders Raymundo Beltran and Thomas Dulorme, both of whom Lundy lost to in close, controversial decisions (a majority decision loss to Beltran in July of 2012 and a split decision loss to Dulorme in December of 2014 on HBO). Three of those aforementioned title defenses took place at the CenturyLink Center in Crawford’s hometown. He hasn’t fought on the east coast since beating Angel Rios in New Jersey in 2011.

“I’m not going to downplay it. [Crawford] does what he’s supposed to do when he gets those guys in front of him, but at the end of the day I haven’t seen any improvement,” Lundy said. “If you look at my resume, I’ve fought the tougher opposition than Crawford.

“He fought a couple of guys I already fought and I’ll you like this, after you fight me you’re never the same. Those guys are never the same after fighting Hank Lundy. Dulorme? I gave you the blueprint on how to beat him. Beltran? I beat him but didn’t get a fair shake. At the end of the day, think about it, if I didn’t get robbed on those fights, ‘Hammerin” Hank Lundy would be undefeated and would’ve already had a world title.

“I can really say no one has flat-out beat me. I’ve suffered controversial losses. I consider myself undefeated. That’s how I go into my fights. This fight, fighting for the word title, I’m looking at it as if I’m undefeated and he’s trying to take my pride.”

Lundy’s bold claims aren’t without merit. The Philadelphia native has faced an undefeated opponent with at least eight pro fights on his record five times in his career and is 3-1-1 in those bouts, including a win over Tyrese Hendrix on ESPN in 2010 and a knockout victory against Jason Cintron, the younger brother of former world champ Kermit Cintron, in 2009. Lundy also owns a split decision win over current World Boxing Association (WBA) Lightweight Champion Richar Abril.

Win or lose, Lundy’s fights never lack in excitement or drama. After reviving his career with wins over Ajose Olusegun and Angelo Santana, the latter in his Showtime debut, Lundy lost a controversial technical decision to Herrera when the fight was stopped toward the end of the fifth round due to a pair of cuts over each of Herrera’s eyes caused by accidental head-butts. The fifth round turned out to be the difference-maker; the fight was even after four, but judges Eddie Hernandez and Fernando Villareal awarded the partial fifth round to Herrera while Zac Young ruled it an even 10-10 round. Herrera won, 48-47, 48-47, 48-48.

Feb. 27th will be Lundy’s third fight since reuniting with his original trainer, Charles Ramey, who coached Lundy as an amateur and helped guide him to wins in each of his first 16 pro fights. The difference is noticeable in Lundy’s defense, which appeared impenetrable in Lundy’s recent knockout win over Carlos Winston Velasquez in October.

“I’m back to the fighting ‘Hammerin” Hank that everybody loves,” Lundy said. “Before, in previous fights, you saw a lot of brawling, but I’m back to my boxing and punching, slickness, going to the body — I’m back, man. Listen, I can’t wait until the world sees me February 27th. I’ve got something to show you.

“Everybody knows ‘Hammerin” Hank is an elusive guy. I make guys miss, I make them pay, but with my boxing ability there’s going to be more damage done now. After I make you miss, I’m going to make you pay.”

Those who’ve followed his career know Lundy’s been clamoring for a title shot as far back as 2012 when he called out 135-pound title contender Antonio DeMarco. Even though it’s taken longer than anticipated for that opportunity to come, the 32-year-old Lundy is grateful for the experiences in between, both good and bad.

“I grew into a hell of a fighter — smart, I know what I’m doing in there,” he said. “When I first jumped onto the scene, I started boxing at the age of 18, turned pro at 23, so in professional fights I was still learning the game. Now I’m actually the complete package. I don’t have any wear and tear on me.

“Most of these guys I’m fighting, because they had long amateur careers, have a lot of wear and tear on their bodies. Sometimes they don’t last that long in the pro game. I’m fresh and I’m going to show the world on Feb. 27th on HBO at Madison Square Garden that ‘Hammerin” Hank is bringing that world title to Philadelphia.”