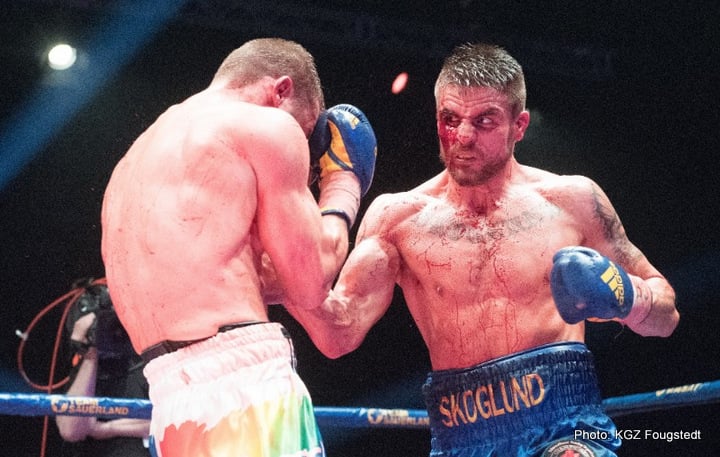 Erik Skoglund continued his unbeaten streak with a heroic performance against Ryno Liebenberg to claim the IBO International Light Heavyweight title last night at the Hovet in Stockholm.

Liebenberg had said he would drag Skoglund into a ‘dog fight’ and that is exactly what happened after Skoglund received a nasty gash above his right eye following a clash of heads in the sixth-round.

With blood pouring from the cut, the Swedish fighter bravely fought on to score a unanimous points victory over the dangerous South African.

‘’That was one of the toughest fights of my career,’’ said Skoglund. ‘’I was worried the fight would be stopped. There was a lot of blood. I’m happy that I was able to continue and claim my twenty-fifth victory. Now, we’re looking at the European title shot. It would be amazing to fight for the title at home in Sweden.’’

‘’What a performance from Erik,’’ said promoter Nisse Sauerland. ‘’The fight changed after the cut in the sixth-round, but Erik showed real class with the way he handled it. Credit to Ryno, he came to fight, but Erik proved tonight why he is one of the most exciting fighters in the division.’’

From the opening bell, Lauren, who had demanded number boys for her title defence, unleashed a relentless attack on Habazin. The Croatian looked in trouble from the first-round and was saved from further punishment by the referee in round three.

‘’It felt amazing to defend my title in front of my home fans at the Hovet,’’ said Lauren. ‘’I said I wanted to make a statement by stopping her, and I did!’’

Habazin was accompanied into the ring by Lauren’s domestic rival Klara Svensson, who had scored a unanimous points victory over Lucia Morelli earlier in the night.

Svensson had criticised Lauren for pouring water on Habazin’s head at the weigh-in and chose to make a public stand against Lauren.

‘’I don’t agree with what Mikaela did,’’ said Svensson. ‘’It was embarrassing. How long are people going to let her get away with things like that? I would love to fight her!’’

Svensson’s appearance did not go unnoticed by Lauren, who called her out after the fight.

‘’Klara is next,’’ she said. ‘’I don’t like her. She is going down like Habazin, and after I’m finished with her, I want Cecilia Brækhus!’’

Erik Skoglund (24-0, 11 KOs) has overcome his injury doubts ready to tackle a tough twelve-round test against South African fighter Ryno Liebenberg (17-2, 12 KOs) on Saturday night at the Hovet in Stockholm.

‘’My training couldn’t have gone better,’’ said Skoglund. ‘’I’ve had some of my toughest sparring sessions and felt perfect afterwards – not only physically, but also mentally.’’

This may sound like a cliché statement from a boxer trying to intimidate his opponent, but for Skoglund, who underwent a serious back operation last year, this is important news.

A herniated disc threatened to end the 24 year-old’s promising career, but following successful surgery and 6 months of rehabilitation, Skoglund believes he is now back to his best.

“To be very honest, I haven’t been myself in my last two fights coming back after my back injury,’’ he reveals. ‘’I had doubts, I was nervous, I was sweating and imagined all sorts of disastrous scenarios before going into the ring.

“Now, everything is under control. I feel solid. I can focus one hundred percent on my boxing. I’m happy that I won the fights after my injury break, but I’m a completely different person and boxer this time.

“When I watch my last two fights and compare them with my sparring the last months, I can see how much, I have developed. I have been able to focus on all the little details this time, and I’ve been able to put all the things I’ve learned from my coach Tommy Antman together.

“My injury is history, all the bad thoughts are behind me and I can’t wait to show my fans how much I have improved. Liebenberg will have no idea about what’s coming at him!’’

Tickets for the Nordic Fight Night on April 23 at the Hovet in Stockholm are available online via www.globearenas.se and www.AXS.com, by calling (+46) 0771-31 00 00 and from the Stockholm Globe Arenas Box Office.

All the fights are available to watch live on Viaplay Fighting.

Viaplay Fighting is the first package of its kind and will be available from April 22 in Sweden, Norway, Denmark and Finland, featuring over 500 hours of exclusive live fighting each year from 150 events including UFC, Nordic Fight Night, Team Sauerland, Premier Boxing Champions, Matchroom Boxing and IMG.

‘’I’m going to f you up,’’ said Liebenberg before lunging for the Swedish fighter during the customary head-to-head photographs.

Throughout the build up the Liebenberg has told Skoglund to prepare for a bad-blooded affair, and in front of the Swedish media, he showcased his trademark aggression at today’s press event.

‘’In South Africa we grow up fighting,’’ he said. ‘’You have to fight to survive. It’s eat or be eaten. They call me ‘The Lion’ because I’m a ferocious animal, and on Saturday night, I’m going to tear Skoglund apart!’’

‘’I respect Ryno as a fighter,’’ said Skoglund. ‘’He’s a tough guy who can take a punch and land a punch. He has talked a lot about what he is going to do to me, and I hope he brings me hell, as I’m ready for the test.’’

Promoter Nisse Sauerland is expecting an exciting contest when the light heavyweights collide ‘’It’s a boxing cliché to say that styles make fights, but this is the classic example,’’ said Sauerland. ‘’We have the boxer versus the brawler, and it’s sure to guarantee an explosive encounter. The IBO International title is now on the line, and both fighters will give it their all in this genuine 50-50 fight!’’

‘’I’m really looking forward to this fight,’’ said Lauren. ‘’The arena is only five minutes from where I live so this will be a great homecoming. Ivana is a strong opponent, but my coach has told me to finish the fight early, so maybe I’ll take her out in the first-round. Either way, I want to give the Swedish fans a great show.’’

Habazin is hoping to spoil the party for the home fighter. ‘’I have prepared well and will do everything I can to win,’’ she says. ‘’I have not come here to lose. I have a lot of fans in Croatia supporting me, and I will be bringing the title back home to them.’’

Tickets are available online via www.globearenas.se and www.AXS.com, by calling (+46) 0771-31 00 00 and from the Stockholm Globe Arenas Box Office.