Liam Williams says he harbors genuine “Hate” in his heart for former IBO super middleweight champion Chris Eubank Jr. ahead of their fight this Saturday night on February 5th at the Motorpoint Arena in Cardiff, Wales.

Liam, 29, just wants to get his hands on the entitled son of the former British boxing great Chris Eubank Sr and destroy him on Saturday night in their main event in Wales.

As far as Williams is concerned, he’s officially sick of listening to all the lip that Eubank Jr. (31-2, 23 KOs) has been giving him during the build-up to Saturday’s fight and he wants to give him a royal thrashing that he won’t soon forget.

Liam aims to put Eubank Jr in his place

What bothers Williams most of all is the way Eubank Jr. is looking past him, talking up the possibility of him challenging IBF middleweight champion Gennadiy Golovkin or WBA belt-holder Ryota Murata next. Liam just sees that as further proof of Eubank Jr’s haughty attitude.

“I don’t need to sell the fight because the fight is sold anyway. The fight sells itself,” said Liam Williams to TalkSport about his match against Chris Eubank Jr.

“The fight is sold out already, so I don’t need to sell the fight. The dislike between myself and Chris is real. I don’t say I hate many people but I do hate him, I can’t stand the guy,” said Williams of Eubank Jr.

So there it is. Liam wants to knock Eubank Jr. off his high horse, and give him some humble pie to eat on Saturday night.

“I just predict a Liam Williams win. As long as I get my hand raised, I don’t care how that actually happens,” said Williams. “But being the level of fighter he is and the dislike between ourselves, I think it would be nice to knock him out, wouldn’t it? I think a lot of people would like to see me do that as well,” said Williams.

“If you go into a fight and get him hurt, you’ve got to go for the kill. Of course, he is,” said Liam when asked if Eubank Jr. is getting ahead of himself by talking about fighting for a world title next against IBF middleweight champion Gennadiy Golovkin.

“I’m fighting for a world title again very soon,” said Williams, who is coming off a loss to WBO 160-lb champion Demetrius Andrade in 2021. “I don’t keep going on about it and saying it because I know I’ve got a difficult task in front of me on Saturday.

“I can’t look past that because when you look past fighters and underestimate them, that’s when it usually comes back and bites you in the a**.

“That’s just straight facts,” Williams said when asked whether he had a tougher time coming up compared to Eubank Jr, who benefited from having a famous dad in starting his career.

“I started fighting on small-hall bills earning pennies, next to nothing,” said Liam. “I really had to graft and make a name for myself before I was signed by a promoter and got to be on TV.

“Obviously, Chris had his old man, who is a legend in the sport. I’m actually a fan of his dad. He’s [Eubank Jr.] just kind of fallen off the back of his old man and he’s definitely gotten into this position a lot easier than I have.

“I’m really excited because 95% of the fans there on Saturday night are going to be for myself,” Williams said about his fight in Cardiff. “I’ve sold thousands of tickets myself.

“It’s going to be crazy. They’re going to blow the roof off. Wales fans are always the best,” said Liam. 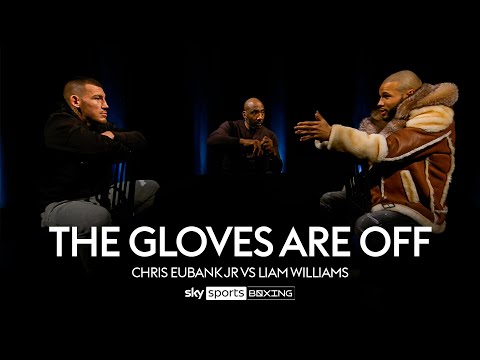