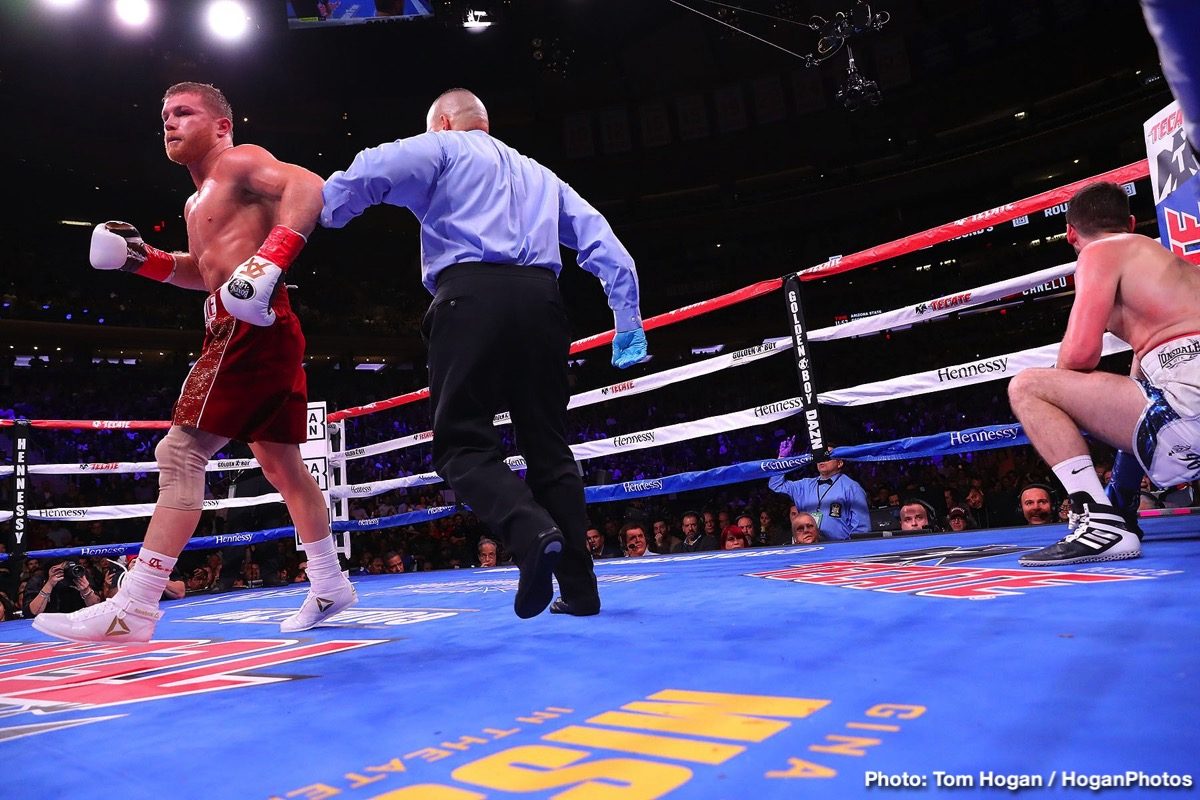 Charles T. (Atlanta, GA): I’m not totally sold on Canelo and I thought his performance this past Saturday night was a waste of time. Who do you see him facing on Cinco de Mayo in his next defense?

Vivek W. (B247): I’ve read commentary from a lot of fans and media who felt the performance was “a waste of time” and I’ll be honest, I think that opinion couldn’t be further from the truth! What’s even more intriguing is that the only people who share that opinion seem to be those who didn’t think he won against Golovkin, or didn’t want to see Golovkin lose to him. As I look down his resume, I have to go back as far as 2010 to find an opponent he faced whose name didn’t carry any weight! He went up to face a man few wanted to face (Golovkin). He was out of the ring for a year due to suspension, and came right back and faced that same man with no tune-up. As an introduction to DAZN, a second fight in three months, and an intro to the Super Middleweight Division, I can live with a Fielding fight.

Relative to who he faces next, that’s a tough question to answer at this stage. Oscar De la Hoya recently came out and said that if Golovkin doesn’t sign to DAZN he won’t get a rematch with Canelo (Paraphrased). But considering that they’ve faced him twice back to back, I think it’s safe to say Golovkin will not be the opponent. Waiting in the wings you have Jermall Charlo, who is a mandatory right now. Danny Jacobs is another interesting fight. If I’m a matchmaker, considering how much love New York City showed Team Canelo against a relative nobody in America last Saturday, I’d aim to see Canelo vs Jermall Charlo, with Jermell Charlo squaring off against Jarrett Hurd. We see the Puerto Rico parade take flight in NYC. Why not bring some Cinco de Mayo love and let Mexico take Manhattan?

That’s an amazing card and one that would energize the city like none other! Truth is, this card would find incredible success anywhere! Vegas, Dallas, Los Angeles, or New York. I would love to see it happen and I think it should! Regardless, I think Canelo/Charlo is a very solid fight (despite the network challenges), and I could see a Cinco de Mayo clash happening between the two. Jacobs is a wildcard and if Golovkin does sign with DAZN, the third installment could get the nod. One of those three men will face Canelo next. You can bank on that one!

Alan C. (Ontario, CA): Anthony Joshua and Eddie Hearn appear very eager to face Deontay Wilder suddenly. Do you think the fight happens next or will it be a rematch of the Wilder/Fury fight with Joshua seeking another opponent?

Vivek W. (B247): Similar to others, I’ve found this very interesting as well. If you listen to Hearn and Team Joshua, they wanted the fight all along, yet negotiations at certain points in the past didn’t appear that way. At any rate, I think all any of us can do is hit the reset button and see what happens from here. Are they pressing for the fight, knowing it can’t happen with the WBC pressing the fighters to run it back in a few months? Some would assess that, but I think the best way to gauge their interest will come down to the offer they present.

In the interview Anthony Joshua did the other night, he dropped a few nuggets that were pretty telling. In the same interview he managed to say they “want the fight now”, he then stated that Deontay Wilder “deserves more than a flat fee”. But he contradicted those statements by saying “we’ll offer him a flat fee but also incentivize it”, and alluded to the possibility of fighting in New York City in April if he “can’t secure” the opponent he wants for the April 13th Wembley Stadium day. So truthfully, I don’t know where all of these statements and perspectives will take us.

Depending on who you ask, there’s a “Dark Horse” out there not being discussed that could actually be the one. That person being Wladimir Klitschko, whom as recently as a week ago was rumored to have contacted Eddie Hearn and company with interest in a return against Joshua in that Wembley Stadium date. The irony here is that when the deal was struck for the Wembley Stadium fight in April, the underground buzz had Wladimir Klitschko not only in the mix, but getting the nod as well. So it’ll be very intriguing to see how things unfold. The great news is that there are several Heavyweights that could make things interesting and even a few of these potential bouts will keep us busy for at least another 2yrs when you consider that there will be about 6 months between each bout. Stay tuned.

Chris B. (West Palm Beach, FL): Tevin Farmer didn’t seem as eager in his response after the fight to face “Tank” when asked. What were your thoughts about his performance and how do you think that fight playing out?

Vivek W. (B247): To be very frank, although I love his toughness and his fighting spirit, I wasn’t particularly excited about the performance of Tevin Farmer. Fonseca had something to do with that, and I think he gave Farmer all he could handle. I feel at the elite level, the best have to separate themselves from the rest. That isn’t to say the best won’t have tough nights out, because Mayweather, Pacquiao, and all the other greats of this generation have. But I felt that fight was far tougher than it should have been and I can’t help but wonder why?

I’ve always placed Farmer on a different level based on better-than-average skills. But what I saw in this recent bout with Fonseca was a guy that gets hit too much to be a true “threat” for Davis. I think Farmer would do well and it won’t be an easy night for either fighter. But if I had to drop a few duckets in the bucket, I like “Tank” Davis at this stage. Kevin Cunningham has found a way to really hone his attributes and I think he’s only getting better at this stage. Tank can be hit too, but just like they say “never hook with a hooker”! You can’t bang with a banger! I think the fight would be entertaining, but at this stage, I think “Tank” punishes him early and stops him late. I hope we get to find out, as Farmer will also improve by the time they eventually square off!