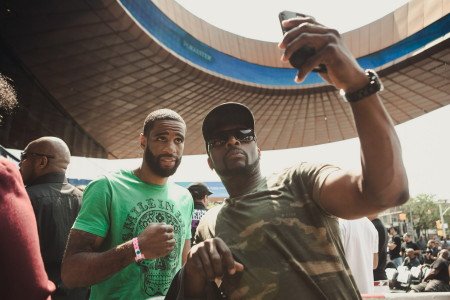 Peterson thinks it’s a great fight and he feels that Santana is going to make it an exciting and competitive match-up. Santana was picked out for Peterson by his adviser for some reason rather than having him fight a higher ranked, better known opponent.

It’s sort of perceived as a mismatch given that Peterson is facing a near bottom ranked opponent rather than someone with a reasonable chance of beating him. Peterson was beaten badly by Lucas Matthysse last year in a 3rd round TKO defeat.

The only reason why Peterson is still a champion is because he was wise enough to request that the Matthysse fight be a non-title fight at 141 pounds rather than at 140. Peterson has since rebounded from the loss to beat Dierry Jean in his last fight.

When asked by one of the Showtime commentators on Friday if his fight against little known Santana is just a tune-up, Peterson said “Who cares what the media and the fans say? I know he [Santana] can fight and I’m looking for a good fight on Saturday night. It’s a good competitive fight and I know I’ll win.”

Showtime gave the green light to the Peterson-Santana fight. They feel it’s going to be a good bout, and that it’ll help expand the amount of fighters that fans are aware of by Santana being seen. They see something in him that gives them the impression this will be a good fight. Of course, if they’re wrong and Santana is wiped by Peterson, then it could work against them. But with Peterson facing a little known fighter, and WBA/WBC light welterweight champion Danny Garcia fighting an unknown in Rod Salka, Showtime is taking a risk with this card because many boxing fans may choose not to tune in to watch the fights tonight on Showtime.

They’re not the kind of compelling matchups that is going to cause casual boxing fans to make it a point to see the fights. That’s something that Showtime may have overlooked when they agreed to the two fights instead of telling Peterson and Garcia’s adviser that he needs to do a lot better than this if he wants to have his fights shown on their network.
When asked if he wants to fight Danny Garcia later this year, Peterson said “Of course, if that’s what the fans want and that what they’re always telling me what they want. So I’m going to always pursue that fight until were in different divisions.”