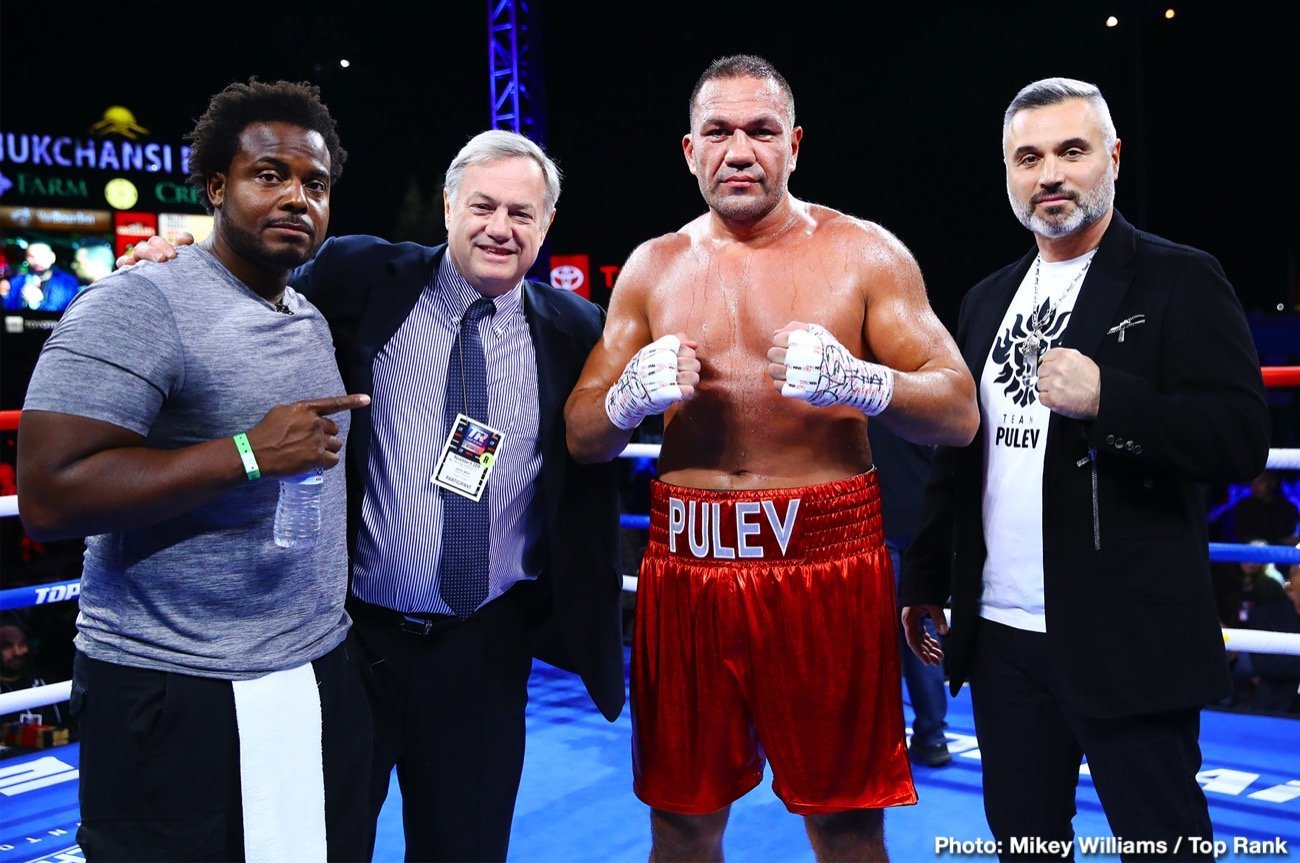 In an explosive interview, Gotzev claimed Eddie Hearn never wanted AJ-Pulev to take place anywhere but London despite a set in stone Croatia offer – it was ‘smoke and mirror’ tactics over the venue and people will ‘think twice’ about doing business with him in future.

“Lets get after Eddie Hearn and the champ because enough is enough.  He hasn’t got his stuff together, we are still waiting for a new date.

“I understand that the whole world has to reset somewhat, but people in the fight game are back in business. We are hoping Eddie might take note and start making some moves – but we are still waiting for those moves.

“I understand that he wrote a nice book, I can’t wait to see his brilliance in this book. I want to learn from a brilliant guy like Eddie Hearn, meanwhile, we’re just sitting here waiting for a date.

“Being the warriors that we are, we went for alternate scenarios to stage the fight, we tried to supply a legitimate place and site this fight could take off – and we did that.

“Croatia came in strong with a big offer, an excellent offer as a matter of fact, for us to take it to Pula – but from day one there was always hesitancy.

“I don’t think they ever wanted to be anywhere outside of home sweet home, UK and London. I do believe that the champion, who I have a lot of respect for, has struggled with the fact that he did not look very good on the road.

“Firstly he loses the fight in New York and then he struggles in the comeback in Saudi Arabia. He’s got issues on the road and needs to be at home. AJ looked like a deer in headlights in Madison Square. He didn’t know what the hell happened to him.

“He was confused, his weaknesses were exposed, he was done. And in the rematch he ran away from a guy who was grotesquely overweight and obese when the conditions were perfect. He was petrified of getting cut.

“He has to be back home where he feels the backing of the crowd and the fans, he likes being home sweet home. And we have agreed to give it to him, except they’re taking too long now.

“Eddie is known for saying one thing and doing another. He needs to organise his thoughts and form of doing contracts and obligations and dealing with people, because in the long run it’s going to create a lot of animosity and people are going to think twice about doing business with Eddie. Eddie does not come through as a guy who delivers on his promises.

“The excellent offer [from Croatia] was there, but unfortunately there was never really any intent from their side taking the fight outside the UK from day one, it was all smoke and mirrors. Once we realised that, we quit trying because there was no sense in continuing to do so.

“We’re happy with it, we agreed to come to the UK and AJ’s back yard, to go to North London and win a title. Because that’s what warriors do. They conquer and that’s what we’re about to do, conquer AJ in his homeland. We agree to all terms, worryingly. But we’re still here playing games.

“The last hurdle to get this fight done is the world’s hurdle. I’m not denying there are people struggling with the virus but we are waiting for the UK government. They have to open borders, so we are waiting for Eddie to have some audience in the stadium, which I do understand – it’s a business, we need the audience.

“This is going to be one punch takes it all, I hope they realise they’ve got a fight on their hands. Because the man standing in our corner is Kubrat Pulev and he’s chomping at the bit, getting ready, getting excited and training hard.

“I admired this guy, I really thought he was the second coming the way he disposed of Klitchko. That was an epic battle. I thought we’ve got something very special here in AJ – and then, what a disappointment.

“Kubrat was scheduled to fight this man in 2017 and then he got a chest muscle tear that created a hematoma. They were laughing, saying he should not fight. That’s a nothing injury, that’s what AJ said. AJ was laughing: ‘I would have fought with that injury’. Well come on son, where are you now?

“Kubrat is going to be in his face. Kubrat is in beast mode, he’s ready to take this man and shred him into pieces. The knockout is coming. You’ve got to be able to take it, not only give it, can he take it? That’s the question.”

ON AJ BEING DISTRACTED BY THE TYSON FURY PAYDAY

“Kubrat is quite disappointed by the champion. AJ has a lagging interest and does not want this fight because the Tyson Fury- the 100 or 200 million payday – is close.

“To them it’s all about the money, for us it’s about honour and respect. We respect the sport, this contract was signed in blood sweat and tears, this isn’t a game. This is a serious sport where people put their lives on the line.

“Eddie is trying to keep it interesting for his fans and his commitments to DAZN and SKY, so obviously you got to talk about the big paydays – and it is a big fight. But there’s a big challenge there, and it’s Kubrat Pulev and they’ve disregarded that challenge time and again.

“And that’s what’s going to bite them, that’s their Achilles heel, they’re focusing too much on those big paydays and the big picture, but guess what, the big picture right now is Kubrat Pulev, that’s who they should be focusing on. And he will give AJ the fight of his life. Pulev will take him out of competition when he knocks him out.

“Kubrat’s thinking: let them do all the planning, then let me get that Tyson Fury fight. Because defeating AJ will create a great podium for a Tyson Fury showdown. He’s already beaten the younger Fury, who Kubrat feels is the better Fury.

“The world needs a comeback fight, a spectacle, an epic battle and something to take your mind off what is going around the world. So we’ll give the world the opportunity to see fight by the rules, by two gladiators.”