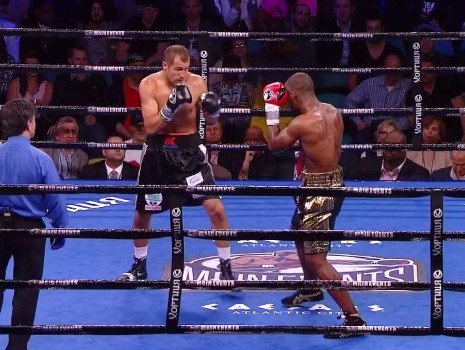 John David Jackson, the trainer for WBO light heavyweight champion Sergey Kovalev (25-0-1, 23 KOs), believes the best strategy for Kovalev to beat the 49-year-old IBF/WBA 175lb champion Bernard Hopkins (55-6-2, 32 KOs) in their fight on November 8th is for him to hit Hopkins everywhere – to his body, shoulders, arms and head. Jackson feels that this is the best way for Kovalev to wear the nearly 50-year-old Hopkins out to either score a knockout or win by a decision.

“I want him to hit Hopkins everywhere, his shoulder, his arms, body shots. Sergey is more athletic. He has power in both hands. He’s not robotic like Hopkins is. Sergey cuts the ring off. Bernard can’t match him power for power,” said Jackson via Fightnews.com.

It’s definitely a smart thing for Kovalev to focus on throwing to wherever he can land his punches, because he could be wasting his time if he focuses too much on throwing head shots. Hopkins is too difficult to hit with punches to the head, because he does a great job of leaning away from shots or blocking them with his shoulders or gloves. If Kovalev can throw punches to the body, shoulders and arms of Hopkins, he’ll increase his connect percentage that way.

Hopkins used to be able to move well earlier in his career, but in his recent fights he’s become more stationary. For this fight, you can expect Hopkins to at least try to move around the ring in order to minimize the punches that Kovalev is able to land. However, Kovalev is pretty good at cutting off the ring, and I’m not sure that Hopkins is going to be able to avoid getting hit by him if he chooses to use movement as his primary defensive strategy for this fight.

Kovalev will get hit a lot with single shots by Hopkins if he focuses too much on throwing to the body. He’s going to need to be keep his guard up if he doesn’t want to get hit a lot by Hopkins pot shots.