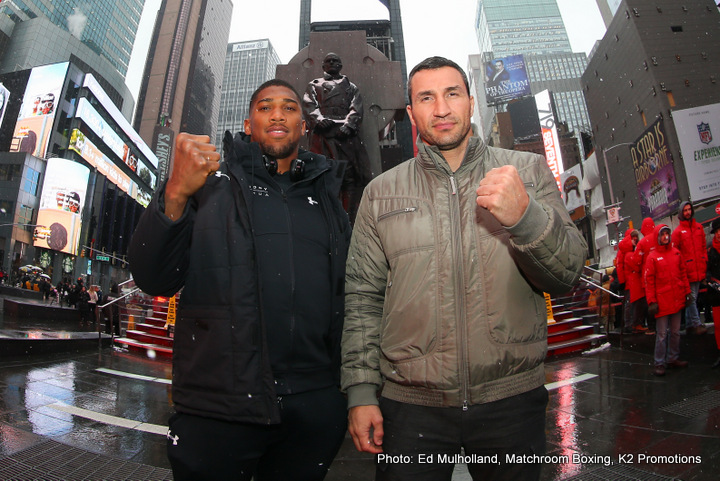 Klitschko Vs Joshua – A Few Thoughts.

There has been a lot written and said about the upcoming Anthony Joshua Vs Wladimir Klitschko fight. Some have said this is a “passing of the torch” fight, others that Joshua will finally become the name he should be, some have even suggested that this is when Klitschko cements his ATG status.

Is it that much of a “big deal fight”?

Yes, of course it is. It is for The IBF, IBO and WBA “Super” Titles. Basically the winner can and most likely will call himself “the man”. Lineal title will still sit with Tyson Fury however, that will be passed to one of these two fairly quickly I feel. The days of Tyson Fury holding a HW belt are long gone in my opinion. That is a whole other topic though and one for another day…

The build up to this fight hasn’t been one of hatred, bullshit, piss and wind as we so often get (Haye Vs Bellew comes to mind). This fight hasn’t needed it. Both Klitschko and Joshua respect each other, the viewing public respect them and the boxing world as a whole is excited by this fight.

Interestingly on the “Gloves Is Off” show on SKY, shown the other night Joshua described himself as a Klitschko clone. I’m not so sure, there are similarities, that is for sure however Joshua still hasn’t learnt to move his feet, his head, or to move anything other than in a straight line. Klitschko once had these problems, changed his tact when needed and then ruled for 10 years. Can Joshua do the same? The legend Emanuel Steward helped Wlad, can Rob McCracken do the same for Joshua’s weaknesses? Time will tell. I’m not sure he can though…

I asked at the beginning will this be a test of boxing skill and ability, in answer to that question, I don’t think so. It will be like a game of aggressive chess. Klitschko will have learnt from being out thought and out boxed by Fury. Joshua will go looking for the KO as that’s what he does. Will one give up enough to the other in order to secure their aim?

Klitschko win via points, or possibly even a late stoppage. Yep, going against the grain here however, that’s really my gut feeling.

Klitschko – “IF you beat me I will congratulate you, WHEN I win, I will help you to come back”