The greatest fighter ever to come from Scotland? The man who gave a primed and peaking (and utterly frightening) Roberto Duran his toughest fight? A living legend? Edinburgh’s Ken Buchanan ticks all of the above boxes, and a whole lot more besides. And today, in Leith, Edinburgh, a statue of the former world lightweight king was unveiled.

“About time,” more than one fight fan wrote on social media. Darn right. Buchanan, who defeated the superb Ismael Laguna to take the WBA lightweight crown in September of 1970, managed just two retentions (adding the WBC belt with his February 1971 win over Ruben Navarro) – but who else faced the peak Duran? Buchanan did, in New York, in June of 1972, and all these years later, the fight is the subject of debate. Did Duran hit Buchanan low, and if so, did he do so on purpose? Or did Duran hit the defending world champ with a knee to the groin in that fateful 13th round in Madison Square Garden?

For years after the fight, Buchanan declared how he “hated Duran.” Maybe it was justified. But Buchanan – who Duran says today gave him his toughest ever fight – fought on, winning some 18 fights and losing six. Buchanan was never world champion again, yet he did score notable wins over the likes of Jim Watt, Carlos Ortiz, and Najib Daho.

Buchanan is a genuine Hall of Famer, and today the 77 year old, though battling dementia, had the crowds showing their love for him at the statue unveiling. Watt was there, and he joked how he hoped the statue of his former rival would “stay still long enough for me to hit it.” 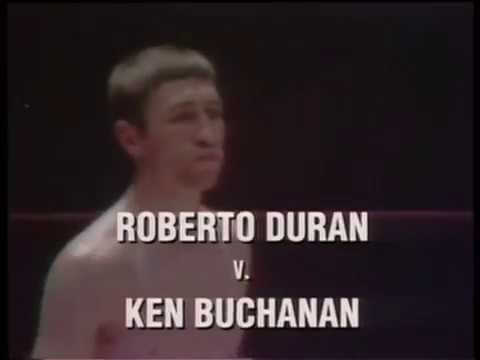