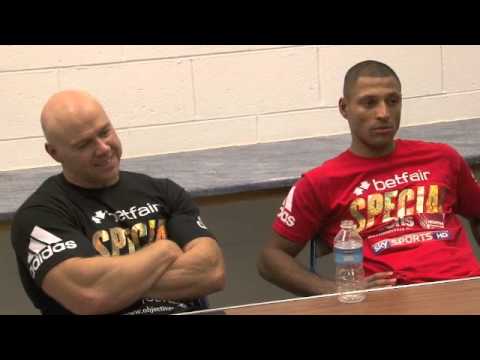 By John Wight – Sheffield’s Kell Brook returned to action on Saturday with a devastating performance against Argentina’s Hector Saldivia, which ended in a third round stoppage to earn the fighter known as ‘The Special One’ a crack at the IBF world title against the newly installed incumbent Devon Alexander, who defeated Randall Bailey on the same night in New York.

In front of a full house at Sheffield’s Motorpoint Arena, Brook was under added pressure to put in a convincing performance after his previous run out against Carson Jones back in July, which ended in a hard fought and unconvincing decision on points. Brook had boxed well against his American opponent for the first half of the fight, but Jones kept coming and forced Brook to dig deep as he began to run out of gas in the second half of the fight

In the aftermath, criticisms of Brook’s preparations and attitude were voiced by his promoter Eddie Hearn, and there was even talk of replacing Brendan Ingle and his son Dominic as Brook’s trainers with Rob McCracken.

However, after this latest performance, these rumours will have been dispelled, as the Kell Brook who stormed to victory with a display of power punching that will have the Alexander camp concerned was a revelation. The decision to employ the services of a nutritionist and dedicated strength and conditioning coach has paid off. Now Brook and his team, whose latest victory takes his unbeaten record to 29 fights with 19 wins by KO, will have no fear in going forward to fight for the world title early in the New Year.

Such was the power Brook displayed he had Saldivia on the canvas in the first round. From then on the Argentinian, ranked three by the IBF, had no answer to the speed, power, and intensity of an opponent who would not be denied. Tellingly the punch that ended the fight in the third was a left jab, Brook stepping in with it to contradict purists of the sport who consider the jab no more than a range finder in a fighter’s arsenal.

Should Brook clinch the title early next year, a future contest against Amir Khan will loom large. Given the barbed comments that have increasingly been exchanged between both fighters, a future fight between them would be huge, especially if Khan’s planned comeback under new trainer Virgil Hunter goes to plan.

On the undercard, Scotland’s Kenny Anderson clinched the vacant British super middleweight title against Manchester veteran Robin Reid, who at 41 will and should definitely consider retiring. Reid acquitted himself well, showing some of the slick combinations and movement he was known for throughout this career. Even so repeated low blows and warnings from the referee saw him being deducted a point in the fourth. It wasn’t pretty, and Anderson looked sluggish at times, but ultimately the Scotsman’s greater desire and strength won out and wisely the referee stepped in to bring matters to a halt in the fifth after Reid was wobbled by a stiff left-right combination. He’d already taken an eight-count and it was clear the former world champion had nothing left in the tank.

It was a well deserved taste of success for Anderson, whose career over the past two years has been defined by disappointment outside the ring with a series of cancellations and promotional setbacks. Now part of the Hearn stable hopefully this marks the beginning of better things.

Another fighter who excited the packed crowd in Sheffield was Doncaster’s Jamie McDonnell. He came through his IBF title eliminator against a tough customer in the shape of Nicaragua’s Darwin Zamora, a late replacement after McDonnell’s scheduled opponent Vusi Malinga withdrew. McDonnell had to put in a shift against an opponent who seemed impervious to anything the young Englishman could throw at him. But in the end the cumulative effects told, when Zamora failed to come out for the ninth. This leaves promoter Eddie Hearn looking forward to another of his stable contesting a world title next.